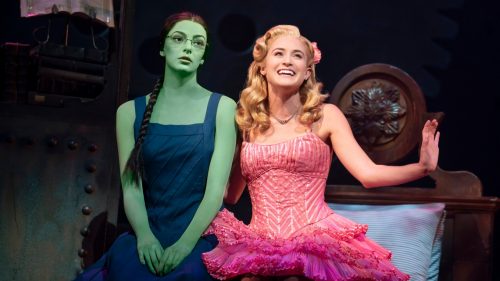 Playing at the Segerstrom Center for the Arts in Costa Mesa, California, until March 6, 2022, one might ask oneself if Wicked the Musical is still relevant and deserving of the price of a ticket. The most expensive tickets in Costa Mesa are as high as $194.75 each, plus a service fee.

Richard Zoglin from TIME described Wicked best when he wrote:

“If every musical had a brain, a heart and the courage of Wicked, Broadway really would be a magical place.”

The 2nd national tour of Wicked starring Talia Suskauer, Allison Bailey, Jordan Litz, Lisa Howard, and Cleavant Derricks, may not have have star power to broadcast on the marquee. However, what it has in aces is the gorgeous production that millions of audiences around the world have fallen in love with — spectacular sets and costumes that stand the test of time almost 30 years later and memorable songs you find yourself belting in the car or shower — paired with a very enthusiastic and talented cast exuding with passion.

What is Wicked About?

For those who’ve never had the privilege of seeing Wicked the Musical on stage, it is the tale of two college aged witches (Elphaba and Galinda, later known as Glinda) who meet at Shiz University where fate matches them as roommates. Their story is told as a preamble and parallel story to the iconic musical, The Wizard of Oz, based loosely on Gregory Maguire’s novel.

Yes, there is a romance featuring a very talented and heterosexually masculine Jordan Litz as Fiyero but more importantly this is a coming of age story about growth in a self-discovery journey that takes the two women (Talia Suskauer, Allison Bailey) in different directions.

It is also a story with a timeless message about tolerance and the danger of unchecked power.

How Do The Stars of Wicked The Musical‘s 2nd National Tour Rate? 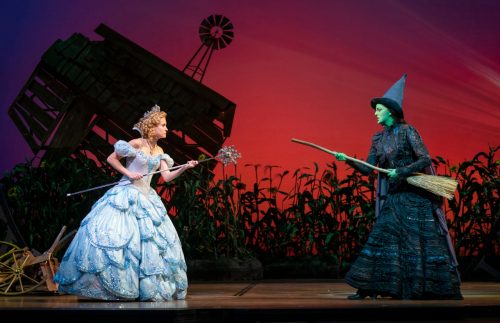 Over the last couple decades, Wicked the Musical has seen countless actors and actresses take up the mantle of the iconic roles. It may not be fair but everyone of them have been compared to the performers who’ve come before them. And often die-hard fans of the musical will travel cross-country just to see one particular star.

With ticket prices upwards of almost $200 a piece (the cheapest seats at the Segerstrom Center for the Arts are $44.75 + a service fee), it is only fair to know the level of talent you’ll be getting. And thankfully this Equity cast for the most part are stellar! Read on…

Talia Suskauer, a graduate from Penn State, with a Broadway credit on her resume, stars as Elphaba in the 2nd National Tour. If you have time, there’s a very interesting interview she gives with Forward about how she brings her Jewishness to the role. After reading that interview, I could appreciate her characterization of Elphaba all the more. Her portrayal is a quiet one (with a terrific belt!) who some might say gets overshadowed by Allison Bailey‘s Glinda but really if you look closely she gives an achingly internalized performance that resonates in 2022 when daily it seems we hear stories on the news about Jews, Asians, Blacks, and others being physically attacked here in the United States.

And there is no denying that her “Defying Gravity” is electrifying and definitely seemed to win over the audience on opening night at the Segerstrom Center for the Arts in Orange County, California.

Allison Bailey as an Admirable Glinda

The role of Glinda is perhaps an even more difficult role to fill after such memorable and ‘popular’ performances in the past by the likes of Kristin Chenoweth (the OG), Kendra Kassebaum, Megan Hilty, Annaleigh Ashford, Laura Bell Bundy, and Katie Rose Clarke. It is a very demanding role comedically and physically.

A youthful Allison Bailey (a former Glinda understudy on tour) does a great job of striking a balance between the zany and ditzy Glinda we meet in Act One and the awakened and self-aware Glinda we can admire in Act Two. Her “Popular” in Act One had the audience start clapping vigorously mid-way through the number and her “Thank Goodness” in Act Two was one of her strongest and most sympathetic moments.

Jordan Litz as a Striking Fiyero

It’s amusing that in a world where women are often first defined by their appearance, that the first thing that came to mind when I saw Jordan Litz as Fiyero on press night was that he was one gorgeous actor and dancer. Not only did he look like he was poured into the cream pants he was wearing in Act One but he also danced and moved with power. Seeing Jordan Litz dance and sing “Dancing Through Life” certainly made him my favorite Fiyero to date.

His masculinity, age, and command of the stage during his first scene were striking. There was no wonder why all the characters were looking at him like an ice cream cone on a hot summer day.  And his scenes with Talia were sympathetic. You could see their love grow from a slow burn to a passionate bonfire when they embraced in “As Long As You’re Mine”. (For reference, my favorite beforehand was Lee Mead from the UK production.)

The Cast of Wicked The Musical Delivers

The rest of the cast from the 2nd national tour of Wicked all give commendable performances too but when Talia and Allison are onstage together, there is an electrifying chemistry between the two women that pulls you in.

Rounding out the leading roles are — Lisa Howard (Drama Desk Winner) as Madame Morrible who gave one of the most commanding performances in the role of headmistress as Shiz University I have been fortunate to see, Clifton Davis (Tony Nominee) turns in a touching performance as Doctor Dillamand, Amanda Fallon Smith (Nessarose) who has a strong singing voice, and Travante S. Baker who showcases great movement as Chistery.

The two actors whom I felt were miscast were Cleavant Derricks as The Wizard and DJ Plunkett as Boq who seemed to be playing their role versus making the role their very own. They each sing fine but something is missing in their performances that would classify them as memorable.

Where to See Wicked The Musical 2nd National Tour

You can see Wicked the Musical at Segerstrom Center for the Arts in Costa Mesa from now until March 6, 2022. Tickets are flying faster than you can say “Defying Gravity” so if you are interested in going be sure to snag your tickets now!

Thanks to Segerstrom Center for the Arts for my tickets to press night. All opinions are my own. 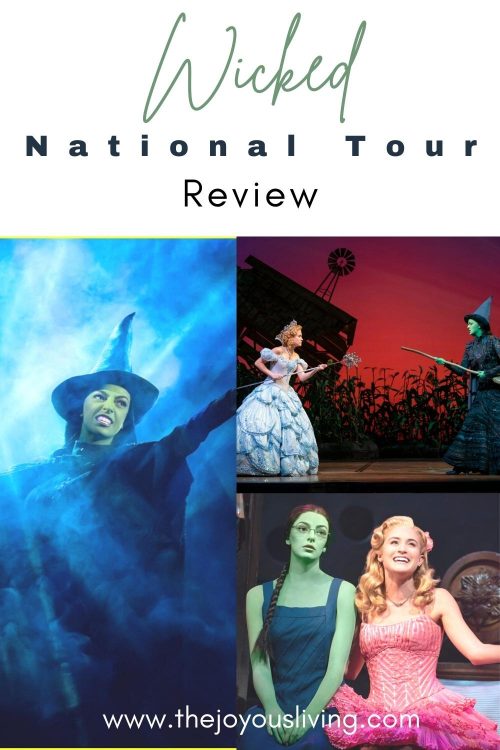