Disney Princess Concert starring Susan Egan (the OG Belle on Broadway in Beauty and the Beast, voice of Meg from Hercules), Anneliese van der Pol (Chelsea Daniels from That’s So Raven and the last Belle on Broadway), Syndee Winters (Nala from The Lion King), and Arielle Jacobs (Jasmine from Aladdin) is making its way through the United States in 2022 to great acclaim.

The princesses are joined on stage by their fabulous music director Benjamin Rauhala and Adam J. Levy who is lucky to duet with several of the ladies. Both of these gentlemen and Susan Egan were OG members of “The Disney Princess Party” series.

For generations, Disney’s Princesses have enchanted us with their courage and kindness. Their music has been the soundtrack to our lives. Now, for the first time in forever, that beloved music will be celebrated in Disney Princess – The Concert! Be our guest as an all-star quartet of Broadway and animated film icons celebrate all the Disney Princesses in an unforgettable evening of songs, animation, and stories, alongside their magical Music Director and enchanting Prince.

Your every dream will come true as these acclaimed performers sing your favorite Disney Princess songs, and share their exclusive, hilarious and heartfelt behind-the-scenes stories from their time portraying princesses on the stage and screen.

We invite you to become part of our world…dress up in your best royal attire and get ready for an unforgettable evening at Disney Princess – The Concert, presented by Pandora Jewelry.

A post shared by Joy @ The Joyous Living (@thejoyousliving)

Disney Princess – The Concert runs approximately two hours with intermission and is recommended for a general audience. As an advisory to adults who might bring young people, this production is suggested for ages 6 and up. All persons entering the theater, regardless of age, must have a ticket.

In addition, this production strives to create a welcome environment for all, but it should be noted that this theatrical concert experience utilizes Broadway-level sound, theatrical lighting and haze, and larger-than-life LED screens for animated visuals, which may affect those with photo- or audio-sensitivities. Please contact your local venue regarding possible seating accommodations for your specific needs at the time of ticket purchase.

This production features Broadway performers appearing as themselves. Costumed Disney characters do not appear at this event.

Original cast members Laura Osnes, Courtney Reed (OG Jasmine on Broadway), and Christy Altmore do not appear in this leg of the tour so that leaves Susan Egan (who also serves as Executive Producer) to represent the original ladies and she does a fabulous job.

In addition to the introduction of new cast members, Arielle Jacobs, Anneliese van der Pol, and Syndee Winters for the Spring 2022 tour, the concert has added projections (much like the ones you either love or hate in Anastasia the Musical) and both before the show and during intermission there were commercials playing for Disney Parks and Pandora. Some might think that these additions make the show “too” commercial and that the larger auditoriums lack the intimacy of Feinstens/54 Below.

Personally, I think the use of the projections and footage of the original Disney princesses on screen is helpful in connecting younger princesses in the audience with the singers. Remember, the singers are not wearing official Disney princess costumes. Yes, sometimes you wonder if it is necessary to show quite so many projections but I would wager they are used for the sake of the children in the audience more so than the adults.

As for the commercials, they are what they are. Thankfully they mixed in fun Disney Princess trivia with the commercials so it is not quite so brutally in your face. (Oddly enough there was no Pandora table in the lobby. Was sort of hoping there was a special charm I could get to add to my bracelet.)

Susan Egan originated the role of Belle on Broadway in Beauty and the Beast in 1994. She was nominated for a Tony for her performance and can be heard on the Original Broadway Cast Recording opposite Terrance Mann and the late Tom Bosley. She also was the voice of Meg in the animated Hercules movie where she sang “I Won’t Say (I’m In Love)”. I was fortunate to see Susan as Belle at 5-Star Theatricals’ production of Beauty and the Beast a couple years ago and even years later she is captivating and the princess all others are measured against.

Despite the youth of her three co-stars, Susan still captures the spotlight and steals the show with her cultured and gorgeous voice. She had the fans enchanted when she sang “I Won’t Say (I’m in Love)” and a medley from Beauty and the Beast. Also, her rendition of “Mother Knows Best” from Tangled was a fan favorite.

Sadly we did not get to hear her sing “Home” or “A Change in Me” but that just shows that the producers know their audiences are not as versed in Broadway musicals as their Feinstens/54 Below audiences.

Fans — here is a video of Susan singing a medley from Beauty and the Beast at a Disney Princess Party in 2018 that includes “Home”.

Anneliese van der Pol was the final Belle on Broadway in 2007 opposite Donny Osmond (Gaston). Before that she was known to audiences nationwide as Raven’s best friend, Chelsea Daniels. She seems to have replaced Christy Altmore’s in the tour singing beautiful renditions of princess anthems such as “Journey to the Past” from (not a Disney musical) Anastasia and a beautiful medley from Snow White, Cinderella, and Sleeping Beauty.

Syndee Winters who played Nala in The Lion King on Broadway sang a gorgeous rendition of “Shadowlands”! Sadly I don’t think most in the audience could appreciate the song. Perhaps too young? Perhaps they hadn’t seen the musical on stage? (Actually, it did seem that any references to Broadway and past Disney icons such as Alan Menken were met with less than enthusiastic applause while the four songs from Frozen were met with thunderous applause.) Just shows you what this crowd is interested in because when Syndee and Adam J. Levy sang “Love is an Open Door” from Frozen the applause was at least twice that of her A++ version of Shadowlands that had given me goosebumps.

Always awesome to see some Asian representation on the stage! Arielle Jacobs is half-Filipino and the younger sister of the OG Aladdin on Broadway — Adam Jacobs. She sang beautifully from the Aladdin, Mulan, Moana, and Pocahontas songbooks. Again, the audience proved their interest was more in the Disney movies versus the stage musicals because the applause for “Speechless” from the live action movie was huge in comparison to the segment she sang from “These Palace Walls” from the Broadway show.

For fans of Arielle, here’s a video of her singing the full song at a Disney Princess Party in 2018.

The musical arrangements by music director Benjamin Rauhala are simply gorgeous. I really am hoping that they’ll release an album or Disney+ will record the show for audiences around the world to see.

One of their gorgeous songs is actually now available to stream or buy wherever you listen to music. I already bought my copy and you should too! Enjoy!!

Disclaimer – my tickets were generously provided by Nederlander Concerts but all opinions are my own. 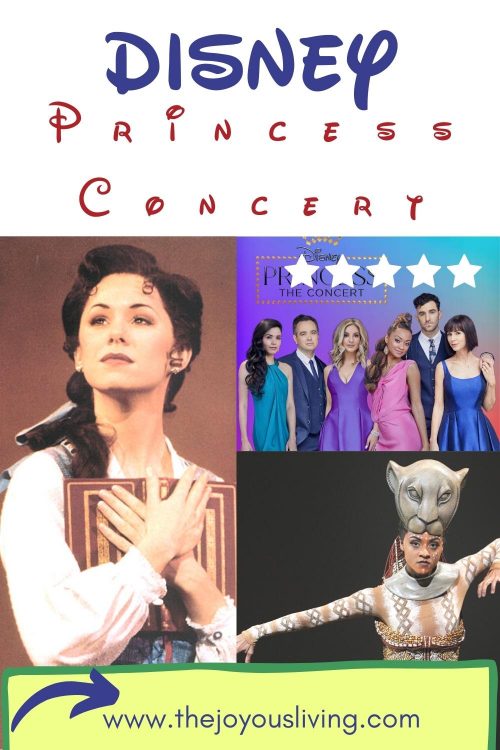