Marvel has done it again. They have exceeded this blogger’s expectations with Ant-Man.

The idea of an insect-sized super-hero is laughable and primarily for all the wrong reasons but somehow Marvel has been able to create an entertaining film filled with LOL moments — courtesy of side-kick Luis (Michael Peña) — numerous Easter eggs (numerous cameos that will have the audience cheering), excellent acting (especially from Michael Douglas and Paul Rudd), great special effects, and tribute well played to my all-time favorite Marvel superhero, the one and only Iron Man.

So what makes ANT-MAN a must-see summer blockbuster?

The sci-fi action film does not take itself too seriously and therein is the reason to breathe easily. Despite the silly concept of an ant sized super-hero, by the end of the film you are rooting for Paul Rudd and Michael Douglas’ Ant-Man in their quest to destroy the film’s antagonist, YellowJacket. The number of LOL moments were plenty and countless, thanks in particular to Michael Peña, the great Easter Eggs scattered throughout the film from it’s opening scene featuring 2 great cameos that will have your fellow audience members cheering and clapping.

The visual effects were very well done as we have come to expect from all Marvel films. It would be impossible to watch key scenes of Paul Rudd as Ant-Man without remembering Honey, I Shrunk the Kids and other similar size-reduction films. Without giving away too many spoilers, the bathtub scene (seen in the right photo) and other similar scenes are reason enough to see Ant-Man in 3D and IMAX 3D.

Disclaimer: My thanks to Walt Disney Studios for the advance screening. All opinions are my own.

More Movies and TV to Watch 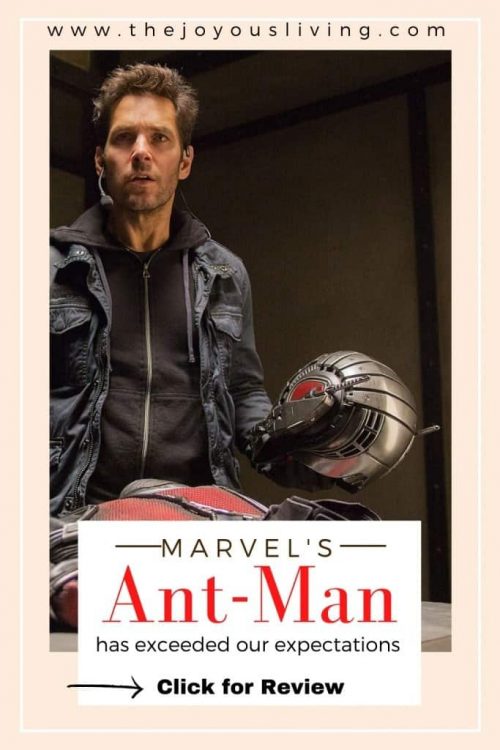