Jane Austen’s SANDITON premieres in the United States on Sunday, 12 January 2020 (PBS). And with it a slew of new characters and beautiful locations and plenty of drama.

With 8 episodes in total, the show’s first episode is mainly based on Jane Austen‘s unfinished 11 chapters and showrunner, Andrew Davies (Pride and Prejudice), used the developed characters to finish the story in keeping with Austen’s.

To help you determine whether Jane Austen’s Sanditon is a show you’ll be tuning into on Sunday the 12th might I share some brief thoughts on the first two episodes?

Charlotte (played by Rose Williams) was raised innocently at her parents’ country estate (similar to Northanger Abbey‘s Catherine). A chance meeting with gregarious Tom Parker (Love Actually‘s Kris Marshall) and his kindhearted wife, Mary (Kate Ashfield), who speak so warmly about Sanditon, a new seaside resort on the cusp of change, leads to Charlotte returning to the resort with them for the season.

At first, everyone appears to be genteel and civil but soon they start to show there are many different layers and there are many things that the innocent Charlotte does not quite comprehend.

One such situation that Charlotte does not fully comprehend is an intimate scene she witnesses between Sir Edward and Clara Bererton.

Evil Has a Face

“I was obliged to do something I didn’t want to avoid something else.”

I was [SPOILER] disappointed to find that the young woman whom we’re led to feel sorry at the end of the first episode is actually as devious if not worse then the step-brother and step-sister duo. It is always the one who seems clothed in the sheepskin who turns out to be the true wolf.

“You can stop playing the injured innocent.”

“Well met. I was growing sick of my own company. Can I persuade you to walk a few steps with me?”

“He has no conscience, no sense of what is proper or decent. I believe he intends to ruin me.”

“People can be so difficult to interpret.”

“I shouldn’t have expected so much from a girl of so little experience and understanding.”

Brief male nakedness (from behind) is shown twice.

A character calls someone “negress” and the second episode’s luncheon party is full of racist remarks that might have someone ready to claw their eyes out. 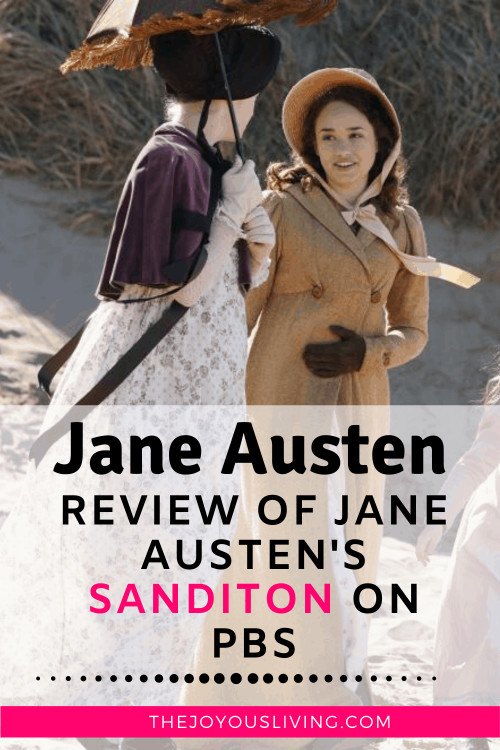 Where to Watch Jane Austen’s Sanditon