Remember Tom Hiddleston as Coriolanus? As many a fangirl and Shakespeare affectionate knows, Tom Hiddleston starred in a limited run at the Donmar Warehouse in Covent Garden through 13 February 2014.

When my friend, Heather, asked if I would like to see the show with her, I said yes for two reasons – (1) Shakespeare in the West End and (2) Hadley Fraser was Aufidius.

Nowhere on my list of reasons was the desire to see Tom Hiddleston up close and personal. I had seen parts of the first Thor film but he did nothing for me either as a performer or good looking man. It seemed like a commercial move, in my opinion, to cast Tom. But after seeing the show on Tuesday I take back all I said before.

Tom Hiddleston is a genius and this production of Coriolanus is the best Shakespeare I’ve seen!

Let’s start by talking about casting. Tom and Hadley were perfection in their roles. Tom had the perfect amount of raw energy, restrain, pain and fury. Hadley’s scenes with Tom were genius, intense and sexually charged which if you’ve read Shakespeare’s play makes complete sense.

Deborah Findlay (Volumnia) was a knock-out in the show giving one exceptionally well-rounded performance. The performance Mark Gatiss (Menenius) gave was quite similar to his portrayal of Mycroft in Sherlock – aloof but invested in the people he loves. Peter De Jersey (Cominius) and Rochenda Sandall (Ensemble) also gave two very powerful performance.

A few casting choices I found to be odd were (1) having Sicinia (Helen Schlesinger) played by a woman and more specifically as the lover of Brutus (Elliot Levey) for it brought nothing to either the role or the play and (2) having Valeria (Jacqueline Boatswain) double as a citizen for without any change of costume (not even to remove her bangles) there were several jarring moments when I had to recall which character she was playing.

Wow. The venue could not have been better with its intimate 251 seat theatre. The director, Josie Rourke (who also directed The Weir), made well use of all available space and ingeniously used a ladder and simple chairs (as seen above) for much of act one to convey everything from the senate to the wars to the streets and paint was used quite effectively on the stage and wall.

One short scene that has critics and fans equally at odds was when Tom Hiddleston washes away the vestiges of war and cleanses his war wounds. I personally found it to be one of the most haunting and memorable moments of the show for all good reasons — the pain evoked in Tom’s face and body were taunting as if to remind us that these wounds and the victory won were received at no small price — but I was astonished when a good number of fangirls giggled (GIGGLED!) during this scene.

My only point of contention with the staging/direction was that it seemed the director and designers couldn’t decide if it was going to be a contemporary production or a historically accurate production. Take for example the costumes — Birgitte Hjort Sorensen (Virgilia) was styled with a modern dress and haircut whereas Deborah Findlay was in traditional garb. And I really do not believe men in ancient Rome wore skinny jeans. 😉

Richard Ryan (fight director) also deserves high praise for his realistic fight scenes between Tom and Hadley and Mark Henderson (lighting designer) for his tense and harrowing design that followed Coriolanus from hero to zero.

All in all, this was a “not to miss” production!

I will leave you with Tom’s words from the trailer — “We string up the people we should really applaud simply because they stood for something and Coriolanus stands for something.” 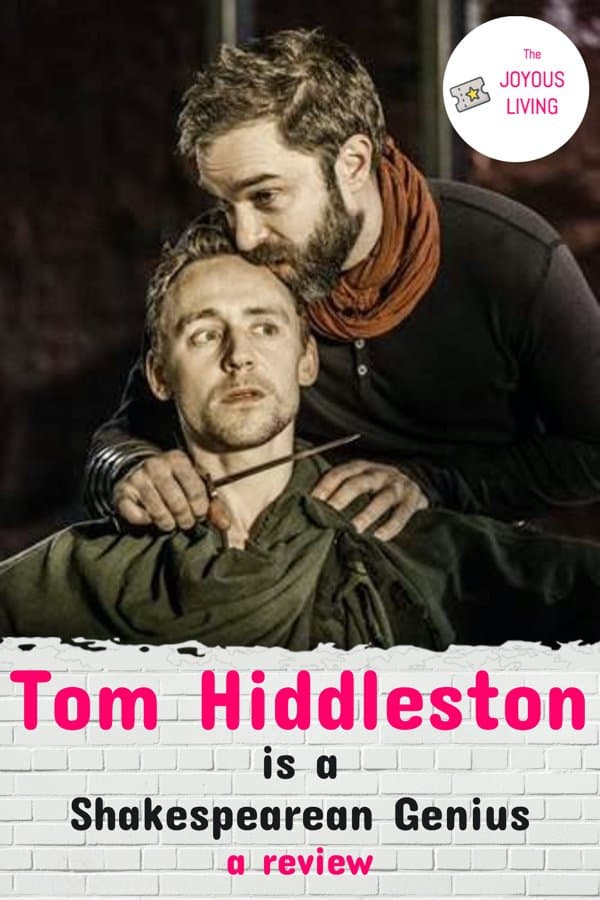 14 Comments on Tom Hiddleston as Coriolanus: A Breathtaking Performance (2014)