The Essex Serpent by Sarah Perry is currently being made into an Apple TV miniseries starring Claire Danes (Homeland) and Tom Hiddleston (Thor).

When I discovered that Sarah Perry‘s book, The Essex Serpent, was being made into a tv series for Apple TV I knew I had to review the book for my A to Z Challenge.

Unfortunately my excitement came to a screeching halt when I started mucking my way through this philosophical book written in 2017 but sounding more like it was written in the Victorian ages. Thankfully I was not alone because many readers apparently have had difficulty getting through the book according to reviews on Goodreads and Amazon. Most likely I would have stopped reading before the half way mark but for your sakes, readers, I have made it to the other side and can report truthfully.

Praise for The Essex Serpent

“A novel of almost insolent ambition—lush and fantastical, a wild Eden behind a garden gate…it’s part ghost story and part natural history lesson, part romance and part feminist parable. I found it so transporting that 48 hours after completing it, I was still resentful to be back home.” – New York Times

London, 1893. When Cora Seaborne’s brilliant, domineering husband dies, she steps into her new life as a widow with as much relief as sadness. Seeking refuge in fresh air and open space, she leaves the metropolis for coastal Essex, accompanied by her inquisitive and obsessive eleven-year-old son, Francis, and the boy’s nanny, Martha, her fiercely protective friend.

Once there, they hear rumors that after nearly three hundred years, the mythical Essex Serpent, a fearsome creature that once roamed the marshes, has returned. Cora, a keen amateur naturalist with no patience for religion or superstition, is immediately enthralled, certain that what locals think is a magical sea beast may be a previously undiscovered species.

Eager to investigate, she is introduced to parish vicar William Ransome, who is equally suspicious of the rumors but for different reasons: a man of faith, he is convinced the alarming reports are caused by moral panic, a flight from the correct and righteous path. As Cora and William attempt to discover the truth about the Essex Serpent’s existence, these seeming opposites find themselves inexorably drawn together in an intense relationship that will change both of them in ways entirely unexpected.

Nature against Faith in The Essex Serpent

An atheist woman meets a Christian vicar on a road in Essex. The premise sounding promising especially when you read that the author, Sarah Perry, is herself from a strict Baptist background and although she has issues with the Church (eg. The Civil Partnerships legislation) she still considers herself a Christian but with perameters. Unfortunately the debate between nature and faith is buried beneath a pile of manure.

For one, the Church (from which author Sarah Perry hails) is not given a fair representation.

[SPOILER ALERT] For another, the unusual friendship between our two leads, Cora and William, is convoluted by the adding of a sexual relationship that is neither necessary nor adds anything unique and helpful to the topic at hand.

Who is the actual Essex Serpent?

While the idea of the titular Essex Serpent is part ghost story and part mythology, I would contend that the book’s antagonist and true serpent could either be Cora or William. Did I shock you there? Bear with me, please, as I explain my reasonings.

None of the story’s characters, aside from the vicar’s wife, Stella, are very likable. Most have only their own interests in mind and are looking for what they can gain from any and all exchanges. Cora, our leading lady, is a cookie cutter repressed Victorian widow and atheist who hopes to branch out. Even the vicar is dull without seeming to have much conviction about his faith nor do we have much reason for why he chose to hole himself up in Essex as a vicar when according to Cora he has a brilliant mind and could have done so much better for himself in a field like law.

While the story skirts around the myth of the serpent, this is no ghost story. You are not likely going to find any gothic thrills between the covers of this book. Instead the flaws of mankind are on full display.

[SPOILER ALERT] And they end up becoming each other’s worse enemies under the guise of friendship and unrequited love using each other for a moment’s pleasure without considering how this will damage the other. To Sarah Perry’s credit, she depicts the sickly relationships as just that – sickly and hollow substitutes for true love and companionship found in marriage.

It was Cora’s mouth he kissed, and Cora’s hand she placed where she wanted it most. Each was only second-best: they wore each other like hand-me-down coats.

Frankly I think the book would have been so much better if Ms. Perry had left the characters to their platonic friendships. Or if only she had given William and Cora some consequence for their careless actions. But no, I must conclude that the true serpent of Essex is the dangerous and tricky serpent we know from the Bible who encourages sin, including fornication outside of marriage.

Be sober-minded; be watchful. Your adversary the devil prowls around like a roaring lion, seeking someone to devour.

You must be the judge and hopefully you’ll find the book more worthy.

For those who wish to read the book, be forwarned that the following triggers are included in the book:

The Apple TV series is currently in production with very few details coming out so far. It is one of the first tv series I am keen to watch despite not liking the book. I think that if done well the series can help flesh out the characters from Sarah Perry’s book and possibly even give a more satisfactory conclusion. [fingers crossed]

Cast of The Essex Serpent

Tom Hiddleston is starring as William Ransome, our vicar.

Deepica Stephen as Sali [is this character an Indian version of Stella?]

David Streames as The Landlord

Crew of The Essex Serpent 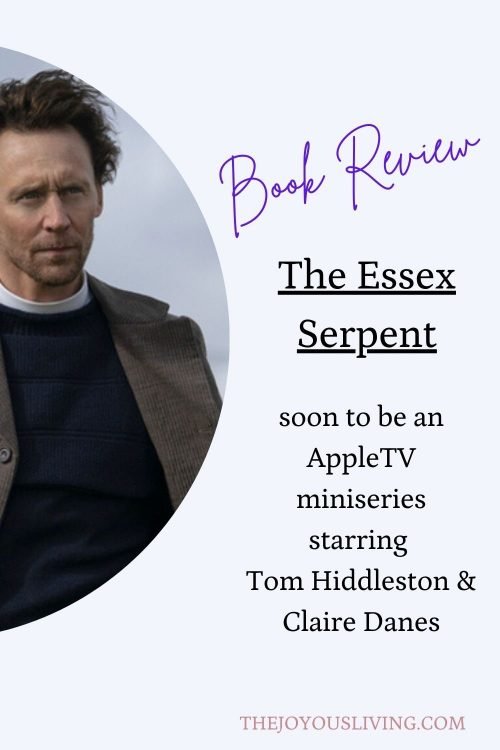 What did you think of the book? Will you watch the tv series when it premieres?

3 Comments on The ESSEX Serpent (2017): Pitting Nature Against Faith in Victorian England