I could not read fast enough. Mario Escobar’s Auschwitz Lullaby is a real page-turner and a fabulous historical fiction portrayal of motherhood and gypsy life in Auschwitz during the second world war.

The story focuses on the real-life Helene Hanneman, a German nurse married to a Gypsy man, who lived for sixteen months in Auschwitz under Nazi doctor Josef Mengele. And since this is a fictional novel, I was grateful that Mario Escobar included a list of historical accuracies and inaccuracies at the end of the novel. Oddly enough even Hannemann’s husband and children’s names are changed.

On an otherwise ordinary morning in 1943, Helene Hannemann is preparing her five children for the day when the German police arrive at her home. Helene’s worst fears come true when the police, under strict orders from the SS, demand that her children and husband, all of Romani heritage, be taken into custody. Though Helene is German and safe from the forces invading her home, she refuses to leave her family—sealing her fate in a way she never could have imagined.

After a terrifying trek across the continent, Helene and her family arrive at Auschwitz and are thrown into the chaos of the camp. Her husband, Johann, is separated from them, but Helene remains fiercely protective of her children and those around her. When the powers-that-be discover that Helene is not only a German but also a trained nurse, she is forced into service at the camp hospital, which is overseen by the notorious Dr. Mengele himself.

Helene is under no illusions in terms of Dr. Mengele’s intentions, but she agrees to cooperate when he asks her to organize a daycare and school for the Romani children in the camp. Though physically and emotionally brutalized by the conditions at Auschwitz, Helene musters the strength to protect the children in her care at any cost. Through sheer force of will, Helene provides a haven for the children of Auschwitz—an act of kindness and selflessness so great that it illuminates the darkest night of human history.

Based on a true story, Mario Escobar’s Auschwitz Lullaby demonstrates the power of sacrifice and the strength of human dignity—even when all hope seems lost.


I love Helene’s bravery and love for her family that makes going to Auschwitz a no-brainer. Unfortunately, I felt that there were parts of Escobar’s story that seemed too inconceivable and modern such as several times when she purposefully put herself in the way of Dr. Mengele and antagonized him and also when she insisted on taking a day to think over something. As if a prisoner at Auschwitz really had an opportunity to think something over. Unfortunately, there were one too many unbelievable moments in the book to earn a five star.

The story of one of Helene’s eldest boys’ (again his name was changed for some unknown reason) heroism was a fabulous secondary story and his relationship with his mom and younger siblings was inspiring. He ended up being part of the gypsy camp’s orchestra that would perform for camp officials. [See Also: You might have heard of or seen the film Playing for Time starring Vanessa Redgrave that was based on acclaimed musician Fania Fénelon‘s autobiography The Musicians of Auschwitz and adapted by Arthur Miller.]

Specifically traumatizing and haunting is the book’s portrayal of Dr. Mengele’s treatment of the gypsy children as seen through the eyes of a mother. Based in part on real-life accounts of Mengele’s atrocities, it is extra haunting seeing the Dr. Jekyll and Mr. Hyde anomaly and knowing it is based on truth.

He was capable of being so kind to the children, to have them become fond of him, to bring them sugar, to think of small details in their daily lives, and to do things we would genuinely admire … And then, next to that, … the crematoria smoke, and these children, tomorrow or in a half-hour, he is going to send them there. Well, that is where the anomaly lay.

Published by Thomas Nelson, this novel does not read as a Christian fiction book. There is no sermon and barely any mention of God that I can remember. This does not take away from the beauty of this novel but it is surprising that it is labeled as Christian Fiction.
I would not recommend this book for young teens or adults who are sensitive to Holocaust autocracies. Nothing is too graphic, relatively speaking. [SPOILER!!] The worst scene is towards the end and involves a mom whose Romani twins had been sewed back to back to create conjoined twins. I checked and this was a true situation as witnessed by Vera Alexander.
If you are interested in books about the Holocaust, Dr. Mengele, motherhood, and gypsies, I would highly recommend adding Auschwitz Lullaby to your library.
I received a complimentary copy of this book from Thomas Nelson through Fiction Guild. Opinions expressed in this review are completely my own. 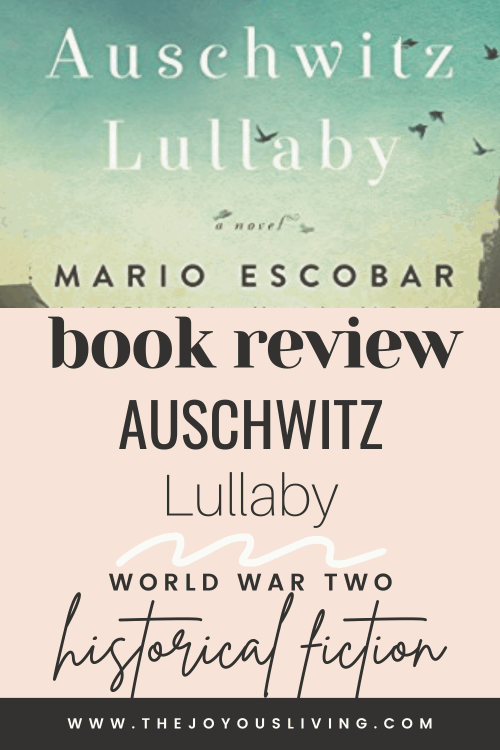