sharing is caring
Legally Blonde the Musical is one of those rare instances when the musical far outshines the source material. With a witty and entertaining book by Heather Hach and memorable numbers by Laurence O’Keefe and Nell Benjamin, Legally Blonde the Musical is one that is sure to please all ages alike. Ventura County audiences might be familiar with the 2007 Broadway production starring Laura Bell Bundy (filmed live for MTV), the 2008 Equity tour with Becky Gulsvig or Cabrillo Music Theatre‘s recent production in 2013. However for many, seeing Young Artists Ensemble‘s production will be a first time experience and truly one that all musical theatre fans should check out!
Young Artists Ensemble is a phenomenal youth program that has wowed audiences in the Conejo Valley since 1981. Alumnus include Broadway’s Sara Jean Ford (The Phantom of the Opera, Little Night Music) and Hollywood’s Amanda Bynes. This summer’s teen musical is no exception with a vocally strong cast starring McKenna Tedrick (Elle Woods), Parker Apple (Emmett Forrest), and scene stealer, Aly Valles (Paulette). 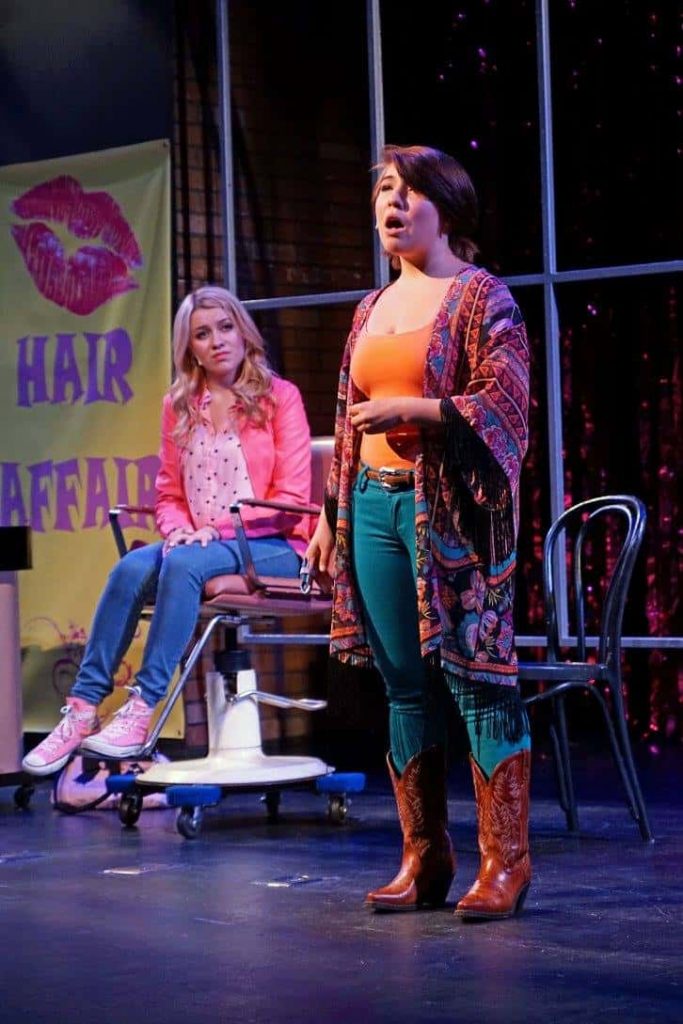 Conductor Susan Treworgy-Calkins does a good job with the 11-piece teen orchestra who filled the auditorium with their sound without overwhelming the singers. Sadly there were numerous mic glitches on opening night but hopefully by the second weekend, all those problems will be gone. 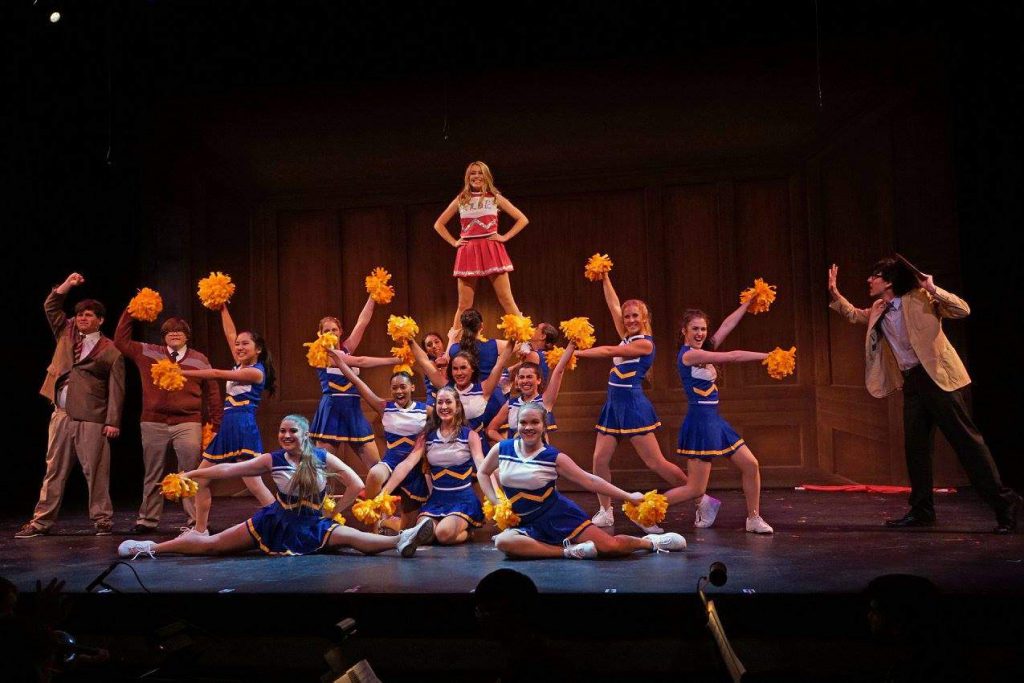 Kudos to choreographer Kate Peltola who pushed her young cast with great and energetic musical numbers. Best numbers were “What You Want”, “Whippd into Shape” and “Legally Blonde Remix”. The energy was palpable and the cast made fine use of the entire stage (and auditorium at times). 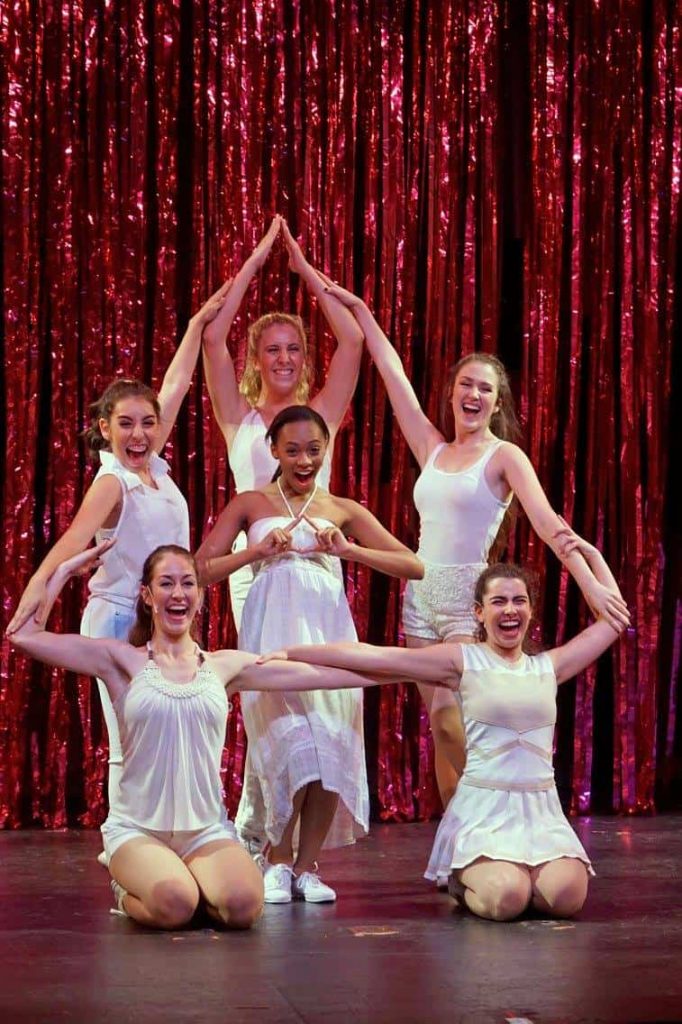 Unfortunately the Scenic Design by favorite Mark Andrew Reyes hindered the show from being the best that it could be and partly that is the result of being a community production with a limited budget. The bare minimal staging during the first half of act one (using the gaudy pink glitzy streamer background – seen in the photo above – and a stairs apparatus that went nowhere) gave off a cheap vibe. Thankfully Reyes redeemed himself with great sets for Elle’s Harvard bedroom and the Hair Affair in particular. 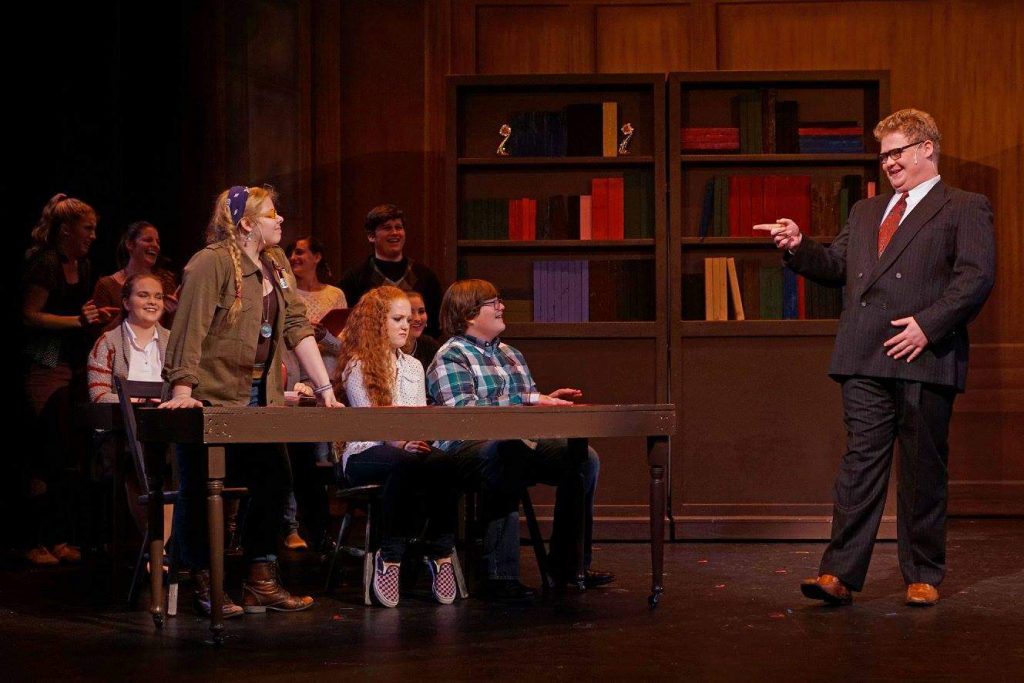 Along the same lines, one tricky job for any production of Legally Blonde the Musical has to be that of Costume Designer. Christy Tobin does a decent job with wacky Paulette’s costumes and the main ensemble pieces. However, Elle Woods, Professor Callahan, Warner Huntington III, and half the supporting cast come from affluent backgrounds and their attire should demonstrate this. Gone is Elle’s Tiffany’s necklace that featured so prominently on Broadway and the West End that it was the projected opening image. Nowhere to be seen are the fitted suits Callahan, Warner and eventually Emmett wear. In fact some of Elle’s shoe choices are depressing too making it almost laughable when someone sings “you’ve got the best freakin’ shoes!” 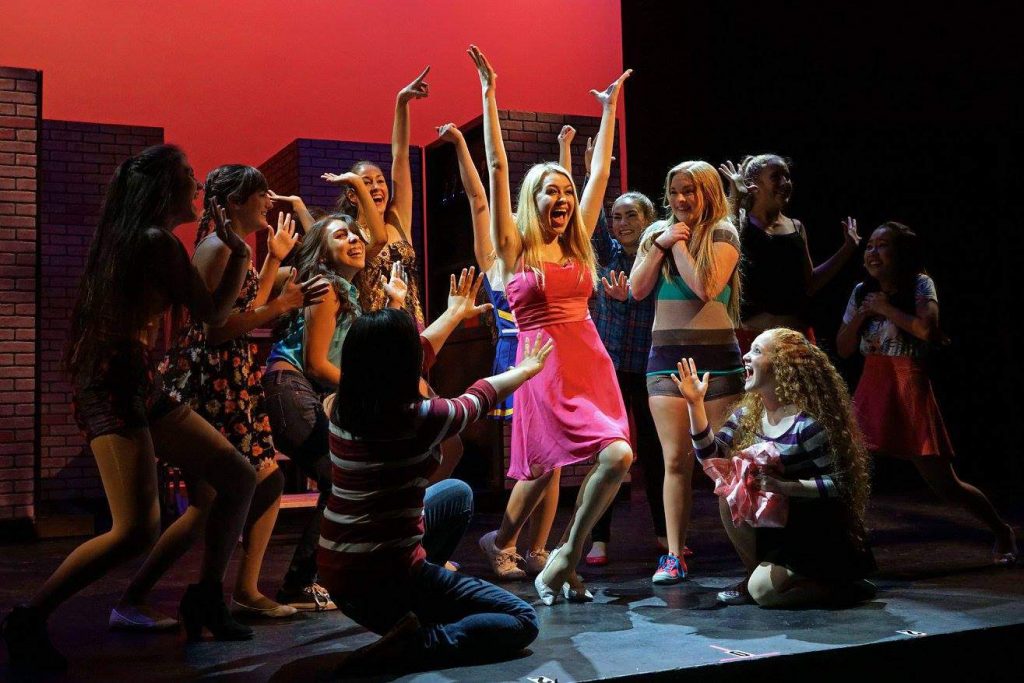 All in all though this is a community teen musical and had the house clapping along and thoroughly entertained throughout. One last shout out to scene stealer Aly Valles (Paulette) and leading lady McKenna Tedrick who met every challenge with grace, wit and charm. If only director Michael Fischer could have “whipped into shape” sorority sisters, Kristen Wisneski and Mackie Kravitz, and had them dial their performances back ten or so degrees we would have had a practically perfect production!
Disclaimer: I had my ticket comped for review purposes but all opinions are my own.