Wow! Last night I was invited to review The Band’s Visit playing at the Segerstrom Center for the Arts in Costa Mesa, California, and I walked away mesmerized and delighted. 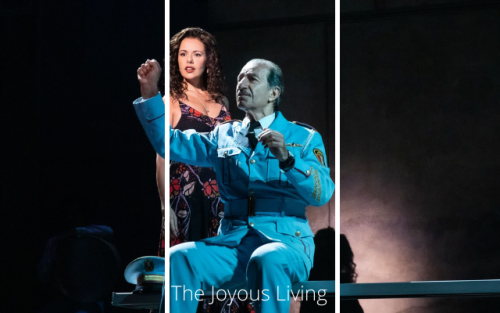 Based on the award winning 2007 Israeli film, The Band’s Visit, this musical by the same name just happened to win the coveted “Big Six” Tony Awards including – Best Musical, Best Book, Best Score, Best Actor in a Musical, Best Actress in a Musical, and Best Direction of a Musical going up against great shows like Disney’s Frozen and Mean Girls – The Musical (coming to Costa Mesa in 2023). It also won the 2019 Grammy Award for Best Musical Theater Album.

The story is set in Israel in 1997. While some readers might not be old enough to remember what was going on in the Middle East in 1997, others will easily remember the Island of Peace Massacre and several Palestinian Arab suicide bombers including the Café Apropo bombing in March.

So with that as a backdrop, imagine an Egyptian police orchestra arriving in Israel to perform at an Arabic Cultural Center. However, due to a pronunciation issue they wind up in a small desert town called Bet Hatikva where the locals are living monotonous lives. Generously, the local cafe owner, Dina [Janet Dacal], offers to feed the men and puts them up in her place, the cafe, and arranges for a few more to spend the night with her two workers, Papi [Coby Getzug] and Itzik [Clay Singer].

What follows is a series of mini vignettes featuring the interactions and connections between the Israelis and their Arabic guests. Highlights include a trio of fathers including Simon [Original Cast Member James Rana], who plays the clarinet in the band and has been working on his own unfinished concerto. He is staying at Itzik’s home where he compassionately connects with the two Israeli fathers, Iztik and his father-in-law Avrum [David Studwell], over a desire to care for and love their families. Special praise for Mr. Rana who not only acts well but plays his clarinet gorgeously and with great tone. 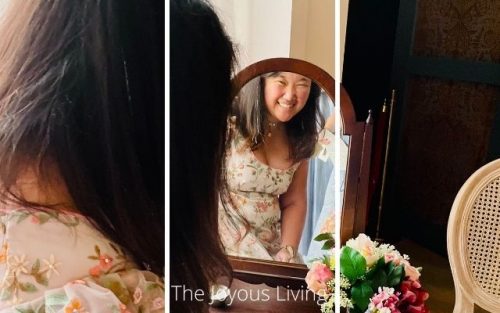 Additional highlights include Getzug as Papi, a nervous young man who cannot muster the courage to talk with his crush. His song, “Papi Hears the Ocean“, has to be the most gorgeous sung song of the show. Not to be left out are the leading lady, Dacal, and leading man, Sasson Gabay as Lieutenant-Colonel Tewfiq. Janet Dacal probably has one of the hardest jobs to sing and speak with a heavily accent. Speaking of accents, kuddos to all the cast for doing such a great job acting and speaking and singing like English is a rough second language.

The name Sasson Gabay might have caught your attention in connection to The Band’s Visit. You wouldn’t be wrong to suppose there is a connection. He played the role of Colonel Tewfiq in the original 2007 Israeli film and was awarded the European Film Awards‘ Best Actor. While the character does not have any big solos or even many speaking lines, what he does evoke is an intelligence and compassion born of many hardships and life experiences in his native Egypt. And his interactions with Janet Dacal as well as the band are spot-on and impactful.

While no life is irreversibly changed because of the band’s visit to Bet Hatikva, the audience and characters’ lives are more enriched as a result. There is a greater appreciation for the language of music and love that transcends race, religion, war/conflict, and language. Additionally, the characters teach each other the importance of forgiveness, compassion, hope, and courage.

These are all great lessons that we can all take away from the show. And if you are lucky enough to see The Band’s Visit on tour, you are going to be in for a treat. It might not be the lighthearted fare of The Little Mermaid or the blockbuster spectacle like Anastasia the Musical but it is a show with great heart and compassion. And with a haunting and achingly beautiful lighting design by Tyler Micoleau (2018 Tony Award Winner).

I hope you enjoy! And don’t run off before or during curtain call because there’s a special instrumental treat immediately afterwards!

Note – there is NO intermission

Where to See THE BAND’S VISIT

The Band’s Visit is currently playing at Costa Mesa’s Segerstrom Center for the Arts through April 3, 2022.

Future Dates on Tour include…

Due to the Pandemic, it is best to check with your venue about vaccination and mask requirements. Currently (as of 3/24/22), Segerstrom Center for the Arts is requiring both vaccination cards and masks for all patrons. 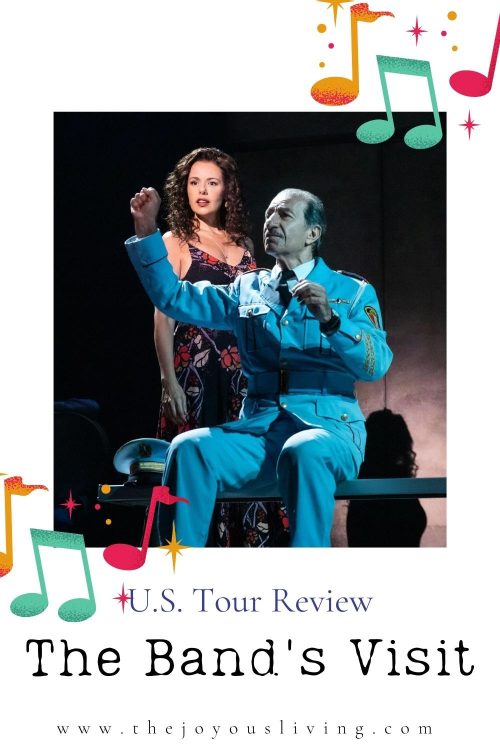