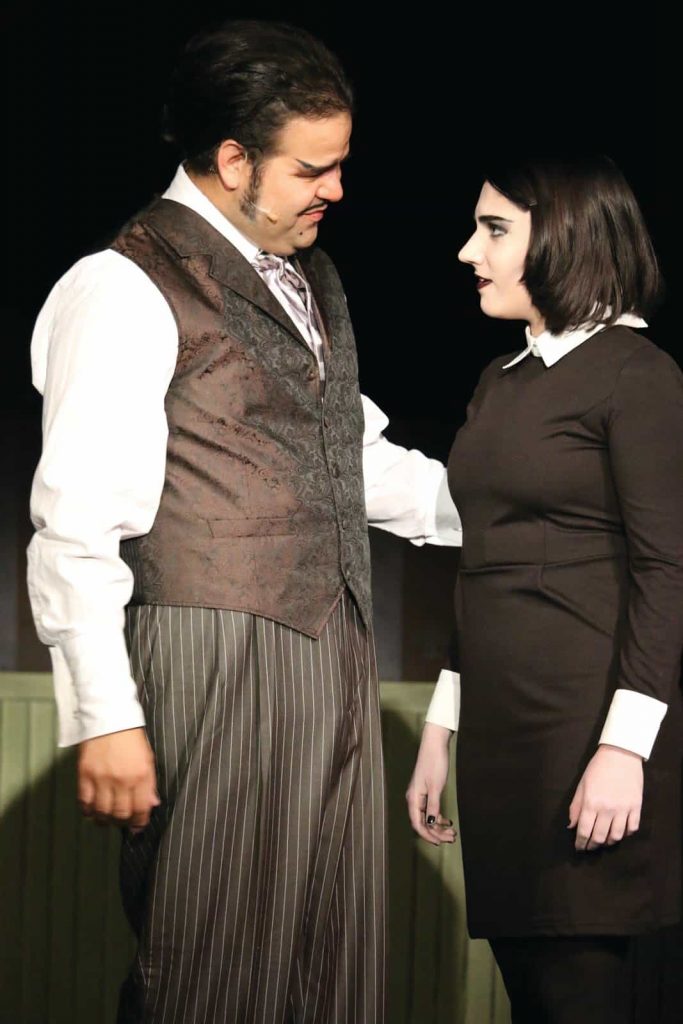 The Addams Family continues to entertain at the Simi Valley Cultural Arts Center (running through 6 December 2015).

The witty and corny musical by Andrew Lippa wins a hearty applause mainly because of the nostalgia that starts from the moment the orchestra plays The Addams Family Theme. Aside from the nostalgia, the Simi Valley company wins with entertaining performances from George Chavez (Gomez), Natalia Vivino (Wednesday), Andrew Metzger (Uncle Fester), and Lori Lee Gordon (Alice Beineke).

The jokes are just as corny as they’ve always been and contemporary barbs about everything from Donald Trump to Starbuck’s infamous red cups will induce a chuckle or two. However, are they worth the price of your ticket? I would hazard to say no. Neither is the nostalgia itself going to make me pay for a seat. 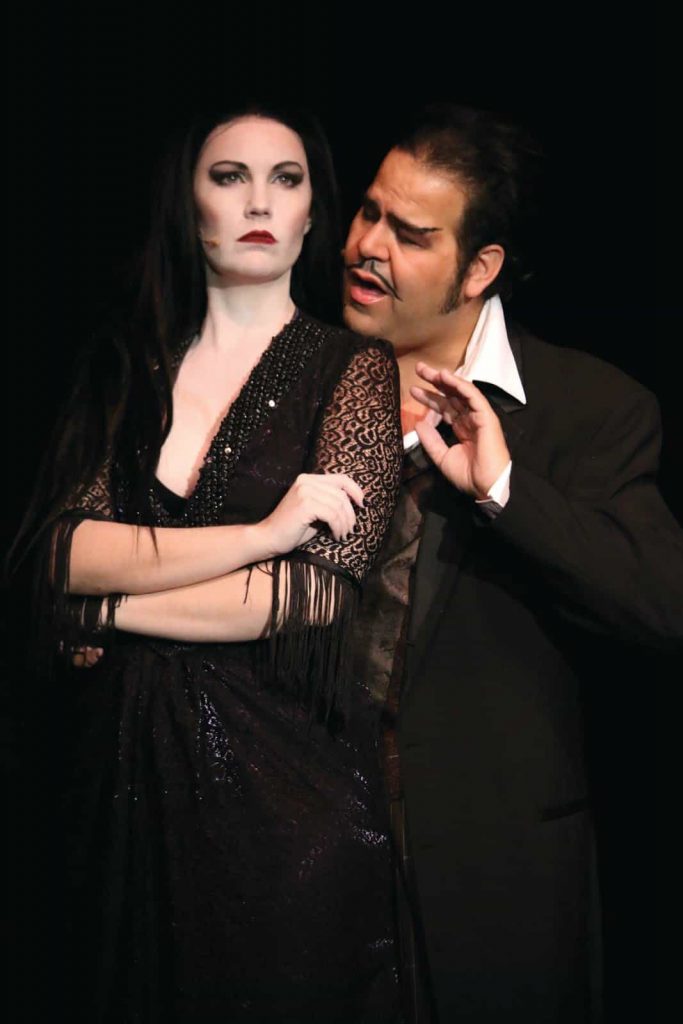 Where the show shines is in the casting of four of their leading actors. George Chavez‘ Gomez takes a bit of getting used to and he certainly has big shoes to fill (John Astin, Nathan Lane, Douglas Sills, and Raúl Juliá for starters). His comedic timing and accent are brilliant, he gives Gomez some heart in his portrayal, and his Act II song, Happy/Sad, is delightful.

Meanwhile Natalia Vivino (Vivienne in last season’s Legally Blonde at YAE) is a breath of fresh air as Wednesday. She has all of Wednesday’s signature looks and attitudes down splendidly. Her songs, Pulled and Crazier Than You, are strong and entertaining.

Andrew Metzger as the over-the-top Uncle Fester was a hoot and if it was not for the poor staging I would have loved his rendition of The Moon and Me. But like with the equity U.S. national tour production I saw, the show stopping performance has to go to Lori Lee Gordon whose Alice Beineke closed the first act to thunderous applause with her rendition of Waiting. 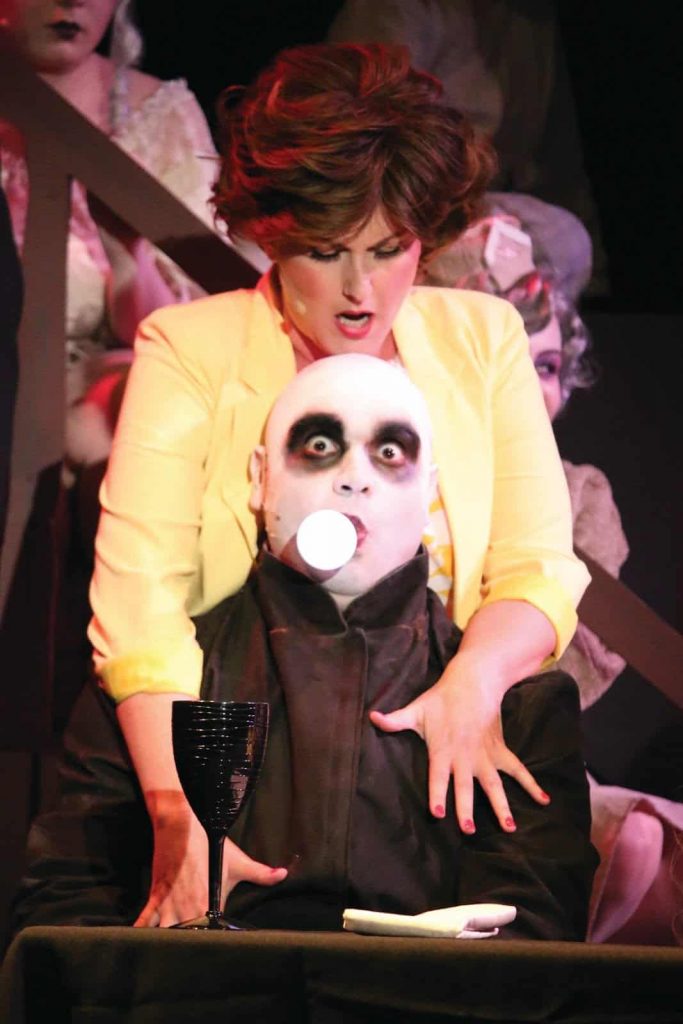 The weakest members of the cast had to be (1) Kayla Bailey as Morticia. While she had the perfect looks for Morticia, she gave the matriarch of the Addams Family no soul or heart and I kept waiting for her robotic acting to morph into something note-worthy. And the dancing during Tango de Amor was like nails on a chalkboard — not a selling spot for the actor even if she got to let loose and flaunt a shorter skirt.

(2) Bryce Phillips as Pugsley was also a disappointment but perhaps he was having an off night since he sounded hoarse.

As for the rest of the cast and ensemble, they all carried their own weight admirably and worked well as a cohesive team. So what was it that I found missing? Perhaps my main complaints have to be with the direction and costume design.

Director David Daniels first stepped out on stage before Act I to give the obligatory rules dressed so casually in shorts and a shirt that I literally gasped. Even at a community theatre such as Simi Valley’s Cultural Arts Center you don’t come to a show dressed so casually. What a conflicting introduction – making one question the quality of the show we were about to see. Thankfully the four leading actors I pointed out earlier were well able to carry their scenes and songs.

Unfortunately this conflicting experience was to continue with decisions including the addition of CHILDREN ancestors. This was one of the most disturbing decisions and took away from the humor whenever the ancestors were on stage singing backup to Fester and the Addams Family. Some people might disagree with me, but I much preferred when the ancestors were adults only.

The worst directorial decision had to be Fester’s previously mentioned The Moon and Me.  I understand that in community theatre you aren’t always able to use flying contraptions, etc., but did they have to use a desk chair covered in black fabric pushed by a visible stagehand to simulate flying??? It was tacky and hokey and I couldn’t believe it possible but apparently there is only so much Addams Family cornball humor one can take and this decision was far reaching to say the least.

As for costuming… Kevin Ellis had to wear noticeable platforms that distracted from his performance as Lurch. Was there no other way to make him look taller? Was there no other actor available? Also Metzger’s head cap looked ridiculous with visible lumps, etc. from the balcony where I was sitting. Also, Morticia’s costume was tacky and quite ugly — there was nothing sexy about that outfit, aside from maybe the deep V-neck. The best costumes had to have been worn by the ensemble of ancestors.

Have I scared you away from the show? Don’t be… There really is something lovable about the Addams Family and the Simi Valley Cultural Arts Center‘s production banks on that. Tickets are pricey ($25/adults, $22/students and seniors) but you’ll be entertained. So what is it you are looking for? A night out filled with nostalgia and laughs? Or top-notch musical theatre and entertainment? If you answered yes to the first, go by all means go. If second, I leave it to you to decide.

FYI:
The show is half way through it’s run so all kinks should have been ironed out by the time of my review. Also, please do not listen to the original cast album before seeing the show as so much of the music has changed.

DO NOT sit in the balcony!!!!! The leg room is tighter than a west end theatre in London and many of my neighbors upstairs were complaining about worse leg room the further back you sat. Also, if you were like me and sitting next to a larger individual, you will feel as if you are in economy on a flight bound to Europe. Not very comfortable at all…