Susan Egan, the Original Belle, comes to Thousand Oaks in 5-Star Theatricals’ Beauty and the Beast! 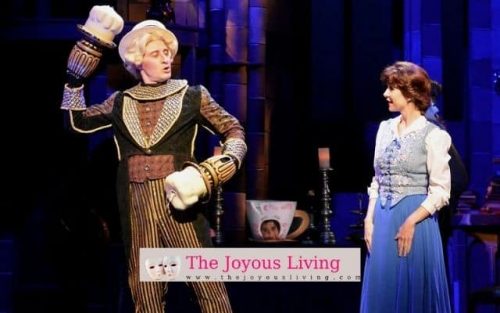 5-Star Theatricals’ Beauty and the Beast

Five-Star Theatricals, formerly Cabrillo Music Theatre, is presenting Disney’s Beauty and the Beast for a limited two-week run with 10 performances from July 20 through 29. The show stars Susan Egan, who earned both Tony Award and Drama Desk nominations for best actress as the original Belle in the 1994 Broadway production, and is directed by Yvette Lawrence, who was also in the original Broadway production and played Belle in Los Angeles opposite James Barbour.

With music by Alan Menken, Lyrics by Howard Ashman and Tim Rice and Book by Linda Woolverton, the Broadway musical has returned to the Thousand Oaks Civic Arts Plaza 16 years after the 3rd National Tour’s visit in 2002. And as newly titled Artistic Director Patrick Cassidy said on opening night, this is Broadway. And why he said? Because not only the Broadway-quality talent from the AEA and those who might be eligible for their AEA cards but thanks to Dan Redfeld‘s lush-sounding 19 pieces live orchestra.

Leading lady Susan Egan (Belle) is just as enchanting as she must have been in 1994. Her voice was as lush and dynamic as was forever captured on the Original Broadway Cast Recording. Her acting was just as spritely and playful as exhibited at the Tony Awards. The last 24 years have done nothing to dampen the original Belle’s allure.

For those of you who have seen Egan on Broadway or at the Shubert Theater, you’ll be delighted to know that this time around she gets to sing “A Change in Me” (the second act number that was written specifically for Toni Braxton‘s turn as Belle on Broadway) and it’s as if you were listening to Egan’s rendition on So Far but with the joy of seeing her perform live and opposite the delightfully paternal David Gilchrist (Maurice).

Jason Chacon as The Beast

Her leading man, Jason Chacon (Beast), has tall shoes to fit and unfortunately never seems to hit the mark. His vocals are top-notch when he hits those power notes during everyone’s favorite ballad, “If I Can’t Love Her”.

Perhaps part of the problem is visual because he does not appear to be that much taller next to Susan Egan or any of the other cast for that matter. Looking back that was one of the beauties of such performers as James Barbour – the height difference that lent itself to a menacing and fearful “Beast”. It made it believable when Belle cowers and jumps in fear at the Beast when they argue in her bedroom at the castle.

In this version, however, it became less of a scary beast but a temperamental beast. Belle was less the cowering girl locked away from her father but a stronger and more independent woman who is ready to fight and stand up for herself.

Chacon did seem to come into his own more so during the second act when he had a chance to show his comedic chops opposite Marc Ginsburg (Lumiere) and Gregory North (Cogsworth) as the nervous lovestruck suitor.

Sadly Susan Egan (Belle) and Jason Chacon (Beast) were never able to create any real chemistry despite both being excellent actors and singers. Their best moments were during “Something’s There” when Belle reads to the Beast. Egan did however charm the audience with her heart-tugging daughterly chemistry with community favorite David Gilchrist (Maurice). Lawrence perfectly nailed it when she said,

You’ll totally believe the connection between Belle and her father…The connection the two of them have is just beautiful.

On the opening night, the castle residents all gave great performances and earned some of the most rousing rounds of applause.

Marc Ginsburg (Lumiere) previously starred in 5-Star Theatricals’ Joseph… as Reuben and Evita as Che where he was noted for being a vocal powerhouse. His turn as Lumiere was spot-on hilarious and his chemistry with Gregory North (Cogsworth) and Devon Davidson (Babette) sparkled as if they had been working together for months and not just weeks.

Sarah Marie (Mrs. Potts U/S) is quite sweet and handles the title song well with professionalism.

Nandami Sinha‘s Madame de la Grande Bouche is hilarious and exhibits strong operatic vocals but unfortunately, her accent is tough to understand. A nice surprise was the talented Courtni Gidish and Aaron Camitses as Salt and Pepper who were a featured dance duo in “Be Our Guest”.

Adam Hollick as Gaston is properly full of bravado aided by Justin Charles Cowden as LeFou in one of the liveliest performances of the evening. Those who remember Hollick from last year’s Joseph and the Amazing Technicolor Dreamcoat will be impressed by his comedic chops and well-chiseled biceps. No, seriously, I heard two older ladies giggling in admiration over those very biceps on the walk to the parking garage. As his sidekick, Cowden is wonderfully buffoonish and handles all his physical comedy well.

And as is the norm with 5-Star Theatricals, the ensemble and kids ensemble were of a high caliber! Great dancers and singers.

And as Patrick Cassidy said in his opening speech, many of the costumes, props, and sets came directly from Broadway and tours and they look fabulous. Aside from some uncomfortable-looking padding for the Beast, both of the title stars look radiant, especially when Egan gets to dazzle in her yellow ballgowns.

The letdown for those of us who have seen previous incarnations of Beauty and the Beast was the diminishing scale of what was once a large and lavish scenic design with an impressive castle, including the Beast’s library and tower. Lawrence does make the most with what she has been given to work with. And in this reviewer’s mind, this production still runs circles around the recent live-action film.

Many might think this piece will only appeal to children. However, this is a musical with a universal appeal.  Beauty and the Beast is for both the young AND the young at heart. As Yvette Lawrence said,

Be prepared to fall in love with Beauty and the Beast all over again.

Note: This production is being dedicated to the memory of Gary Beach, the Original Lumiere, who sadly passed away on 17 July 2018.

Disclaimer: My ticket was graciously comped for review purposes but all opinions are my own.