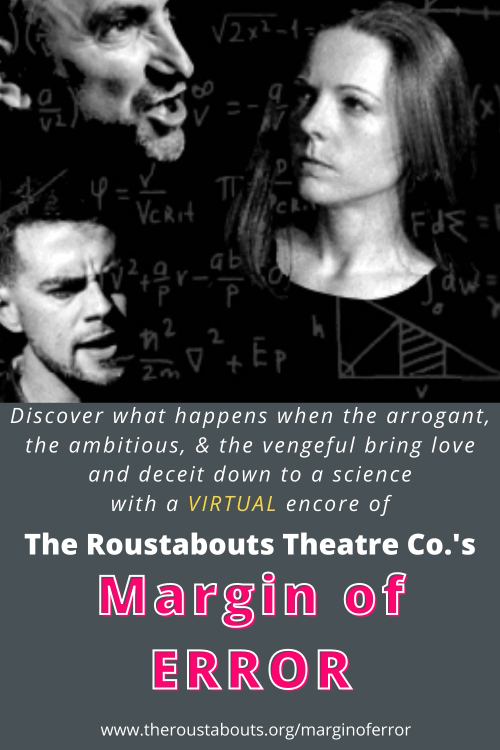 In a time when the live theater is not an option due to Coronavirus and social distancing, theatre companies are getting creative and Roustabouts Theatre Co. in San Diego, California, has chosen to show a virtual encore performance of their premiere production, Margin of Error. With tickets at $14, you can have a front-row seat to the beautifully filmed Margin of Error through 23 August 2020.

Official Description of Margin of Error

This fast-moving drama of twists and turns was presented by The Roustabouts at San Diego’s Lyceum Theatre April 14 to May 7, 2017. The story is centered on one evening in which a famous scientist, two of his students, and his wife confront each other in that margin of error where reason goes blind and passions ignite. Margin of Error unveils what can happen when the arrogant, the ambitious, and the vengeful bring love and deceit down to a science.

Review of Margin of Error

Using both long shots that reveal the audience and close up shots, the virtual encore of the 2017 Margin of Error gives the audience intimate access to a drama that is taut with heart, longing, pain, and suffering.

Who Are the Characters in Margin of Error?

When a physicist with an ego to match his large personality [Ruff Yeager as Anton Myrvold] is hosting two of his top grad students at his home for dinner with his wife [Roxane Carrasco as Sunita Myrvold], things are about to explode as secrets come to light. And the biggest secret is not even the fact that Anton is planning on giving a prized fellowship to Britt [Kate Reynolds] instead of her boyfriend Gray [Joel Miller] who had been promised the said fellowship.

Ruff Yeager is a formidable leading man who gives an impressive performance that is not toned down one bit for the filming of Margin of Error. But perhaps that is a good thing because as a potential Nobel Peace Prize winner, Anton’s ego is ready to explode and he feels king of the world. He is being considered for one of the greatest rewards in the world, has a loving wife, and can tickle the ivory keys on his piano incredibly well.

His wife, Sunita, an internationally prominent peace activist from India, is the moral center of the story who is best equipped to bring Anton back down to earth. But his appetite is insatiable and might be the end of his rose-tinted world.

The young grad students, Britt and Gray, are in a romantic relationship that on the outside looks like they are on the cusp of taking the next step. Kate Reynolds (who happens to be the daughter of director Rosina Reynolds) does a great job portraying the conflict her character is fighting against in her personal life. Joel Miller as Gray has perhaps the hardest role because of the difficulty in making his character appear genuine.

When we peel back the layers it becomes frightfully clear that nothing is as it seems and when we accept the margin of error (change in circumstances) in each of our characters’ lives – the results are not pretty.

Virtually – the best scene has to be in Act Two when Ms. Reynolds does an excellent job with a climactic scene involving all four characters divided into two separate rooms on Sean Fanning’s beautiful set. Thanks to Curtis Mueller‘s lighting design and Rosina Reynolds‘ direction, the scene bleeds intimacy and at times even appears cinematic.

What is the Moral Message of Margin of Error?


“[Sunita is] a beacon of virtue and moral courage. Arms open wide for her wherever we go. Frankly, it’s quite flattering being her husband.” – Anton

“You have nothing to hide. They are honorable scars.” – Anton
“Honorable or not, that does not erase disfiguring marks on a woman’s back.” – Sunita

“You bought me a backless dress… and her scars” – Britt

“Haven’t you two been playing together nicely?” – Anton

“They just assume because you’re female you’ll drop out sooner or later. I did what I had to do to get what I wanted.” – Britt

“With all due respect, Mrs. Myrvold, you don’t know what’s going on.” – Gray

“I don’t want confrontation – I just want the truth.” – Sunita

How to Watch Margin of Error

Price: $14 per screening [+ donations requested]. You have a week’s time to watch the screening.

Age Appropriate: PG-13 for adult themes and countless uses of the F word.

Coming Next: No Way Back starring Jessica John about one family’s desperate escape out of Iran in 1981 [true story]. We watch through the eyes of ten-year-old Mahshid as her country is cast into revolution, turmoil, and war. Her family’s secret escape out of the country will keep you on the edge of your seat until the very last scene. 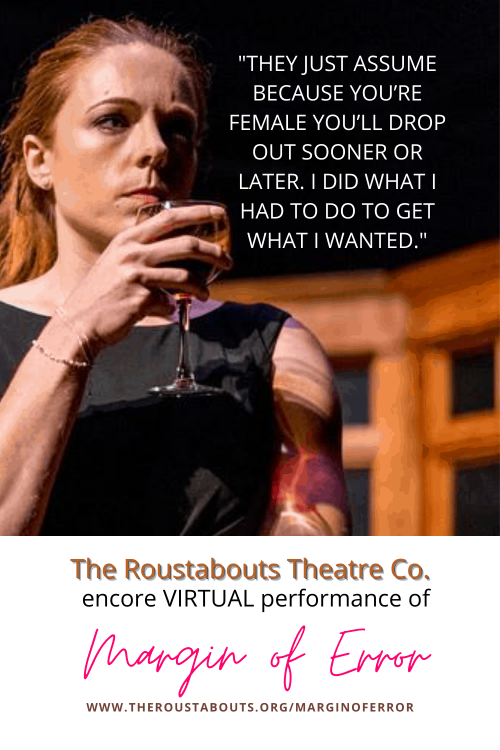 Disclaimer: I received my virtual ticket for review purposes but all opinions are my own.