sharing is caring
Cabrillo Music Theatre‘s current production of Oklahoma! opened with great fanfare on the 17th of July 2015 at the Thousand Oaks Civic Arts Plaza. 60 years since Shirley Jones and Gordon MacRae lit up the screen in Oklahoma!, a new generation of actors are given the chance to make the iconic American musical numbers their own. And what a treat it was for the enthusiastic audience!
Oklahoma! truly is a show for all ages with hummable and familiar numbers such as “Oh What a Beautiful Mornin’!”, “People Will Say We’re in Love”, “I Cain’t Say No” and the title number. Director Lewis Wilkenfeld calls it a “Timeless” show about the American Dream. There are the Rodgers and Hammerstein staples: romantic leads (Dan Callaway as “Curly” and newcomer Callandra Olivia as “Laurey”), the secondary comedic trio (Damon Kirsche as “Ali Hakim”, Melanie Mockobey as “Ado Annie” and Josh Switzer as “Will Parker”), the older and wiser woman (Dynell Leigh as “Aunt Eller”), and sinister villain (Tim Campbell as “Jud Fry”). 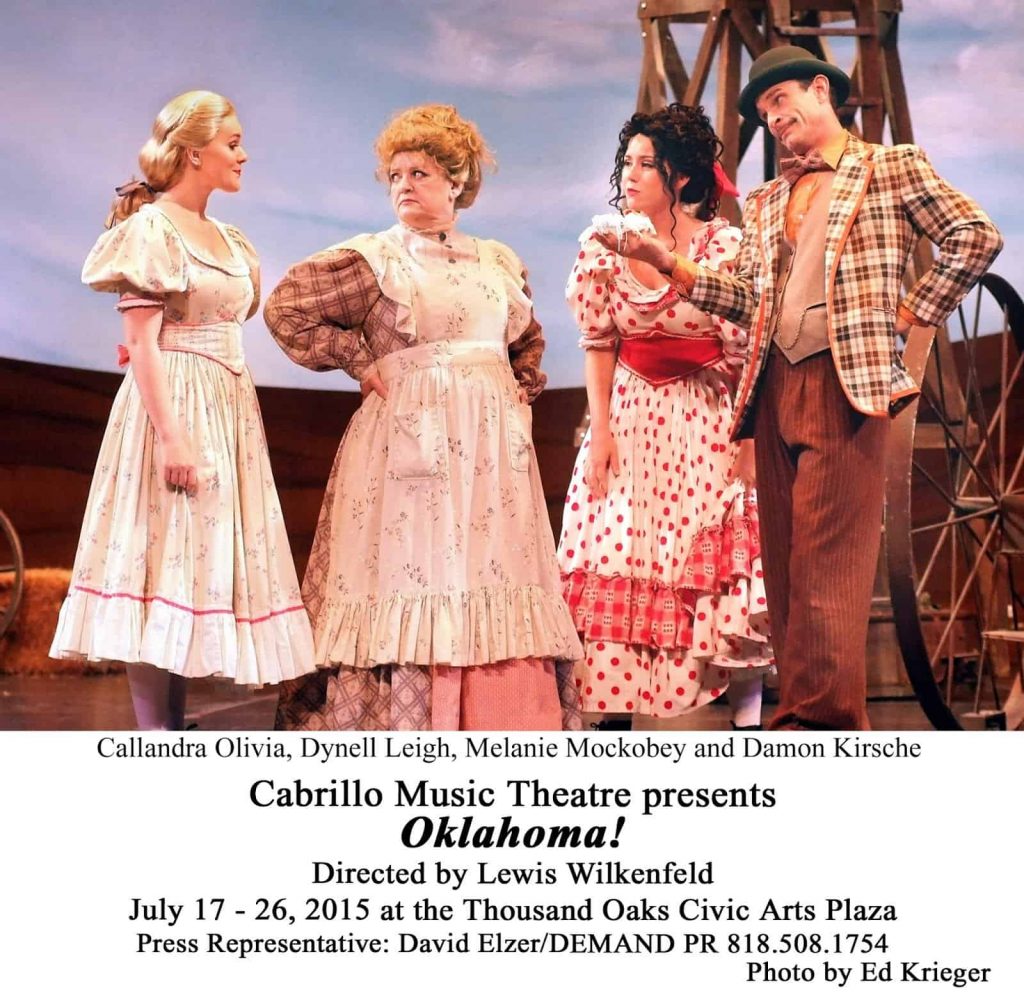 So how does this production measure up?
CHOREOGRAPHY: This golden oldie is a dancers dream show and thanks to choreographer, John Charron, they were able to shine and the large ensemble was especially strong in their group numbers such as “Kansas City”, “Many a New Day” and “The Farmer and the Cowman”.  My eyes were especially drawn to former Rockette Amy Lenhardt (Margaret) and Houston native Abby Jo Luquette (Dallas) and Cedric Dodd (Willie-Joe Waters). A special nod to Brittany Bentley as “Dream Laurey” who was not only a gorgeous dancer but also a great actor conveying more emotion and depth in the ballet than Callandra Olivia in the leading role as “Laurey”. 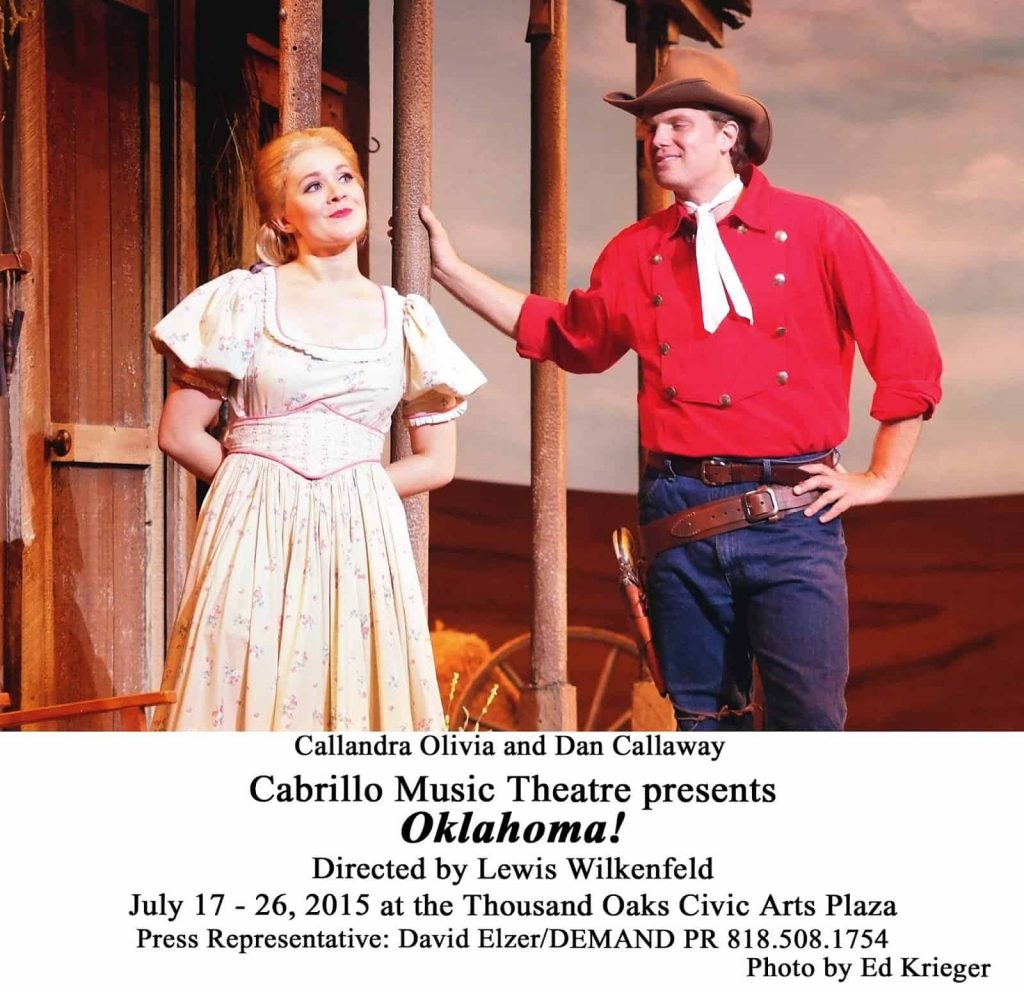 ACTING: No offense to Ms. Olivia as she does have a gorgeous lyrical soprano voice that suits her numbers well but unfortunately her first act performance is devoid of much emotion so it is difficult to empathize and feel anything for her Laurey. She did better in act two but unfortunately by then it is too late as she has already been surpassed in performance by her co-stars, especially the hilarious supporting trio, Melanie Mockobey (Ado Annie), Josh Switzer (Will Parker) and AEA actor Damon Kirsche (Ali Hakim), who had the audience in stitches with their comedic performances. 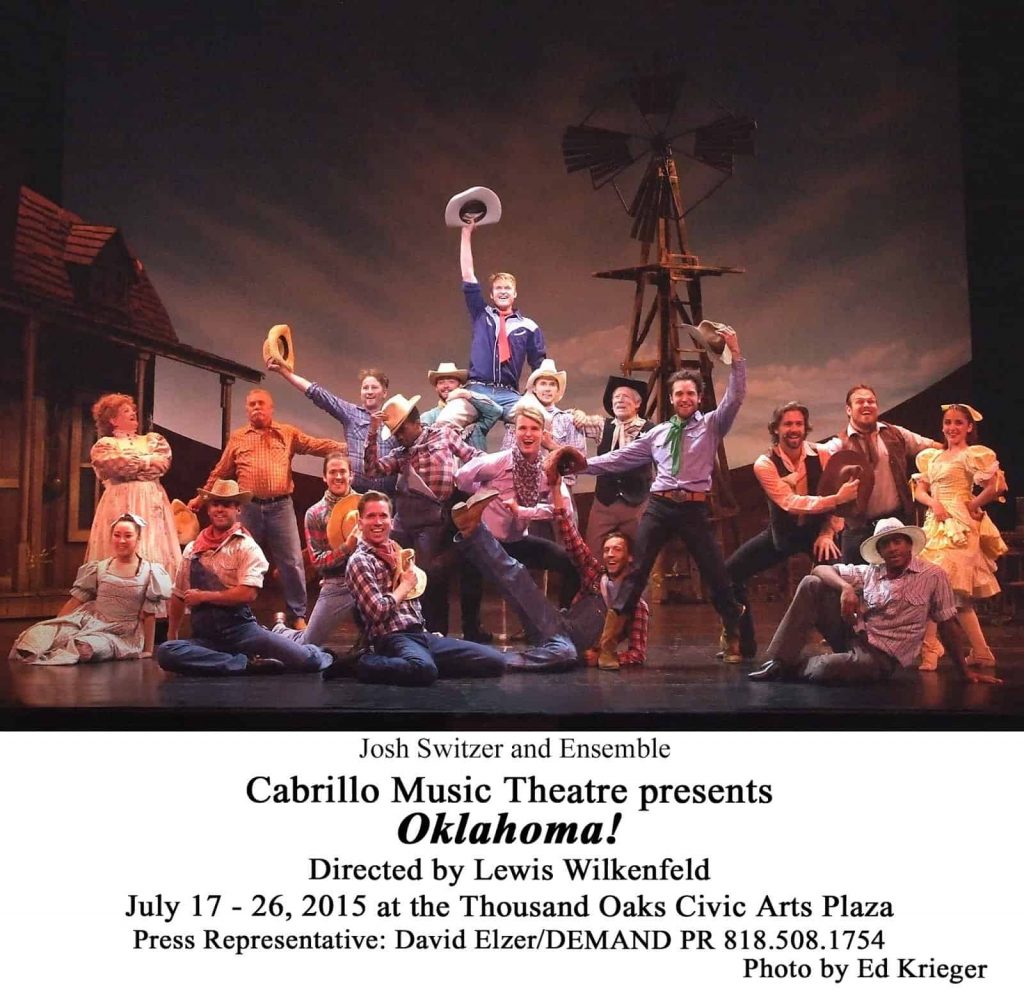 Strangely, Ali Hakim’s number, “It’s a Scandal! It’s a Outrage!”, was nowhere to be found in the Cabrillo Music Theatre’s production. And truly it is a shame that baritone Kirsche did not get a chance to break out in song and dance with the male ensemble as that is often a favorite number. Josh Switzer‘s Will Parker was perfectly two parts dim and two parts charm. It was a disappointment though that there was no lasso dancing during “Kansas City” although Callaway’s Curly did mention his skills with the rope in a later scene. AEA actor, Dan Callaway, was vocally strong as Curly while not the stereotypical handsome leading man nor memorable in his performance. The real scene stealer and find was Tim Campbell as the dark and sinister villain Jud Fry. Campbell is not the stereotypical Jud Fry in appearances but rather slim of frame. But where he lacks in stature, he certainly makes up in creepiness — he could have easily passed as Charlie Manson’s ancestor! No kidding. Campbell’s Jud Fry is a scary man that would make you want to cross the street. With greasy and unkempt hair, a hunched and unsteady walk, and that gorgeous baritone voice, his Jud Fry is one not to miss! 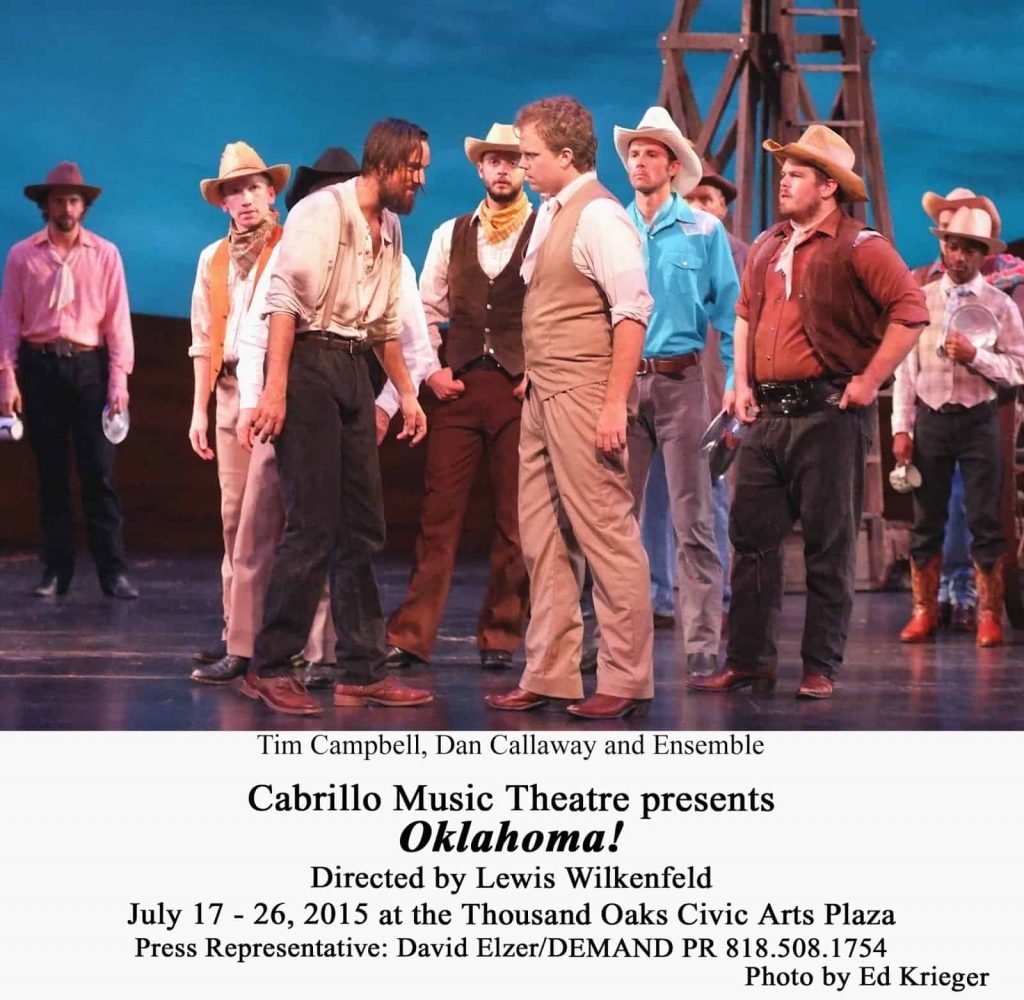 The Cabrillo Music Theatre‘s Oklahoma! truly is a mixed-bag performance. The leading cast were all in good voice but truly the leading duo was boring with hardly any chemistry and sparkle. The true stars of this production are Tim Campbell (Jud Fry) and Damon Kirsche (Ali Hakim) for their spot-on performances. Meanwhile the choreography is at the heart of this production with entertaining numbers demonstrating the strengths of the large ensemble featuring such gifted dancers as Amy Lenhardt and Kylie Brunngraber (Savannah) who’ll be joining the national tour of MAMMA MIA! in the autumn. And kuddos to the adorable Kabrillo Kids ensemble.