Happy Monday! This month I have been sharing stories about child abuse and sexual assault as part of the A to Z Challenge. And what an amazing experience it has been, especially given the opportunity to share true stories of victims and conquerors. Today’s story is about the Oatman girls who were abducted and enslaved by a Native American tribe in 1851.

The Oatman family, an LDS family native of Illinois, was attacked by a group of Native Americans in present-day Arizona. The Native Americans massacred all but Mary Ann (age 7), Olive (age 14), and Lorenzo (age 15). They left Lorenzo for dead and took the two Oatman girls into captivity.

According to Olive Oatman’s memoirs, the girls were kept as slaves and frequently beaten for about a year before being traded for two horses and other trinkets by the Mohave Indians. This is where their luck turned as the tribal leader’s family took an interest in the girls and they were adopted into the family. Sadly Mary Ann died at age 10-11 during a drought. 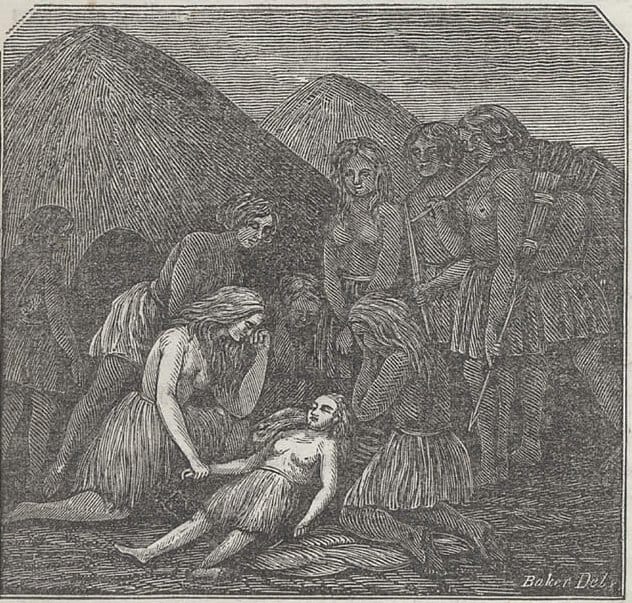 At age 19, Olive was returned to civilization (Fort Yuma) by Francisco, a Yuma Indian messenger. Within days of her return, she was tearfully reunited with her brother, Lorenzo, who had survived the massacre.

Much of what happened to Olive during her time of captivity and with the Mohave Indians is unknown with conflicting stories told by Ms. Oatman herself. For instance, a friend said that she believed Olive was grieving upon returning to Fort Yuma because she had been married and mothered two children.

Olive denied ever being assaulted, married or having children.

The character of Eva in Hell on Wheels (AMC) was loosely based on Oatman.

The Captivity of the Oatman Girls (Lorenzo and Olive Oatman)

18 Comments on A to Z Challenge: Olive Oatman’s Hellish Ordeal