Happy National Prayer Day. During a time like we are currently living in where Coronavirus dominates all conversations, now is a perfect time to be on our knees praying for a cure, healing for our friends and neighbors, and wisdom for our leaders.

For today’s holiday, I am sharing 7 musicals and songs where the characters break into prayer. Some might be humorous while others will tug on the heartstrings.

“Better Than I” Joseph: King of Dreams

When folks think of musicals about the Biblical character of Joseph, they naturally will think of Andrew Lloyd Webber‘s Joseph and the Amazing Technicolor Dreamcoat. The musical is a favorite and the Act One lament, “Close Every Door“, sung when Joseph finds himself falsely imprisoned.

However, I far prefer David Campbell‘s “Better Than I” from the animated Joseph: King of Dreams and Dallyn Vail Bayles‘ studio recording of the song for his album Prayer. The song is full of hope and also illustrates Joseph’s relationship with Yahweh (something that is not as well illustrated in the Andrew Lloyd Webber musical.)

“How Many Tears?” Martin Guerre

Martin Guerre is another musical by Claude-Michel Schönberg and Alain Boublil who wrote Les Miserables and Miss Saigon. The sung-through musical is based loosely on the life of the real Martin Guerre of the 16th century. The show had troubles pleasing the critics in London and was massively re-edited several times but never unfortunately made it to Broadway despite a U.S. National Tour.

The songs, however, are genius and many will tug on your heart much like the music from the previous Les Mis and Miss Saigon. One such song is Bertrande’s “How Many Tears?” (previously titled “When Will Someone Hear?“).

Bertrande’s husband has abandoned her (having never consummated the marriage) to fight in the wars and she is distraught when her Catholic family and friends blame her for things outside her control.

How many tears through the years must I cry?
How many prayers to the Lord in the sky?
Still the pain, tears at my broken heart.
Sometimes I feel, I was cursed at the start.

“If Praying Were Horses” The Civil War

The Civil War is one of Frank Wildhorn‘s underappreciated musicals. The musical contains sketches about both fictional and non-fictional characters who were involved in the Civil War from Frederick Douglass to Mrs. Bixby who lost 5 sons to the War.

Two married slaves, Clayton and Bessie Toler, are separated at the auction block.

In 1999, Frank Wildhorn brought together not only the best from Broadway but also Country Music to record “The Civil War: The Complete Work“. Artists on the album include Trace Adkins, Michael Bell, Betty Buckley, Linda Eder, Amy Grant, Trisha Yearwood, and more! On the album, you can hear the stirring rendition of “If Prayer Were Horses” by original cast members Michael Bell and Cheryl Freeman (“Hercules“)

Don’t cry for what might have been
There ain’t enough time
Just hold me and memorize my story
This country we’re travelin’
Is all uphill climb
It’s windy and empty and so lonely
If prayin’ were horses, all of us would ride
And ever I’d be by your side

On a funnier note, you need to listen to “Mabel’s Prayer” from the musical FAME. Mabel is a chunky girl at elite performing arts high school in New York who wants to be a dancer but is told that she needs to shed some weight before that can become a reality. This is her humorous prayer when she can’t handle the temptations anymore.

Note: I did not record this video.

The beautiful French musical, Romeo et Juliette, by Gérard Presgurvic has been translated into over a dozen languages including the Italian Romeo & Giulietta: ama e cambia il mondo. The Italian soundtrack is thankfully available on Amazon Music Unlimited.

One of the most beautiful and tragic numbers from Act Two has to be the duet, “on Prie”, or in Italian, Mio Dio pietà. Romeo has been banished and Juliet mourns his loss and that of her cousin.

I sadly don’t know French but thankfully this haunting lament been translated on lyricstranslate.com.

At the time of this video – it was extra magical because Damien Sargue (Romeo) and Joy Esther (Juliette) were married from 2009-2010.

“Preludium” The Sound of Music

Most would guess wrongly that Rodgers and Hammerstein opened their musical, The Sound of Music, with Maria in the hills singing the title song. [That shows you just how Julie Andrews’ movie has engrained itself into the minds and hearts of viewers all over the world.] They’d be wrong. The show opens with one of the most glorious pieces of acoustic music filling the auditorium as the nuns are at prayer. This number is chill-inducing when performed properly as in the recent equity and non-equity U.S. Tours I was privileged to review.

The Preludium includes the nuns singing the Dixit Dominus (Psalm 110).

“Where are the Simple Joys of Maidenhood” Camelot

I remember watching with my roommate Walt Disney World the brilliant Camelot movie starring Vanessa Redgrave. I had previously seen James Barbour (Lancelot) and Rachel York (Guenevere) in the show at La Mirada Performing Arts. It is such a beautiful classic with songs such as “Where the Simple Joys of Maidenhood” that Julie Andrews originated and “If Ever I Were to Leave You” made famous by Robert Goulet.

Guenevere, nervous about marrying Arthur, sings to St. Genevieve about her longings for the ‘simple joys of maidenhood’.

It is a playful song without taking itself seriously.

I hope you have enjoyed my choices. And a very happy National Prayer Day to all who celebrate. 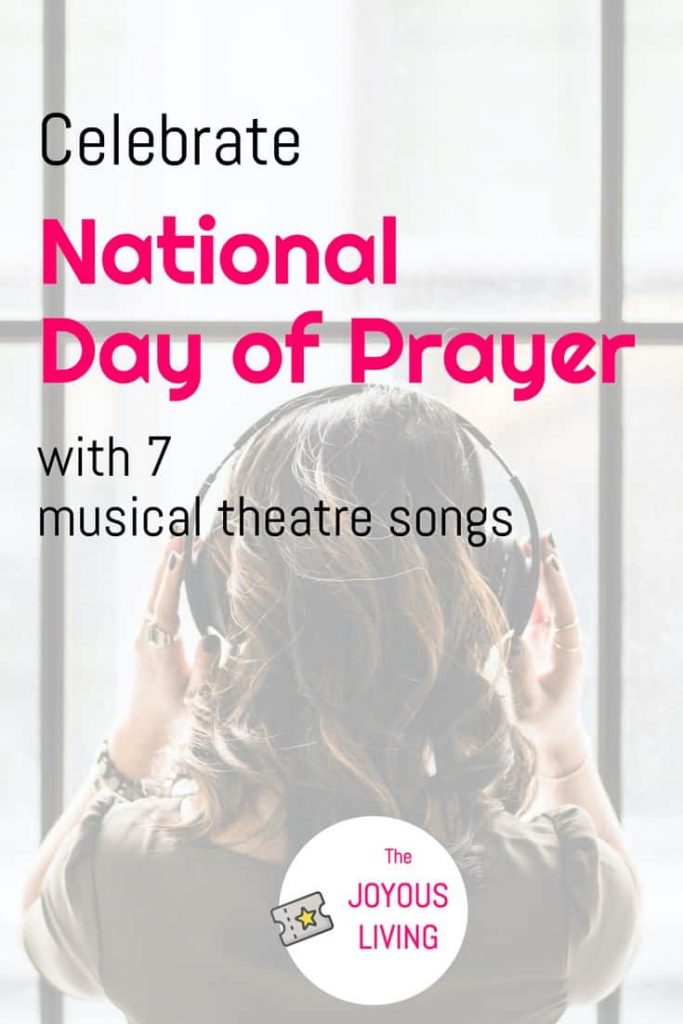 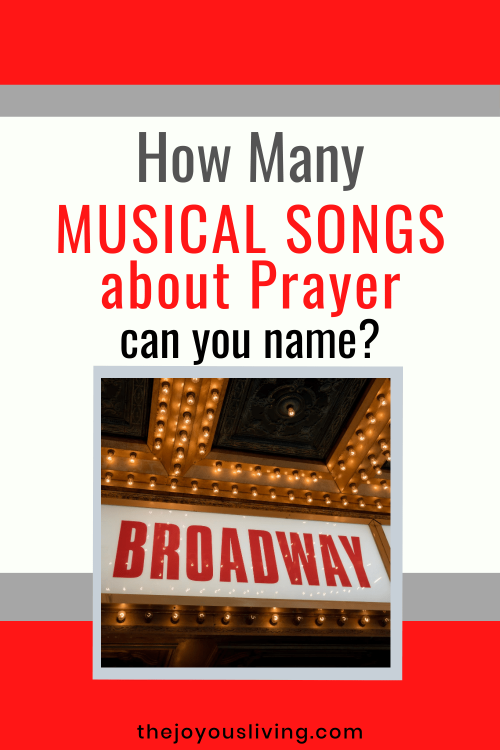 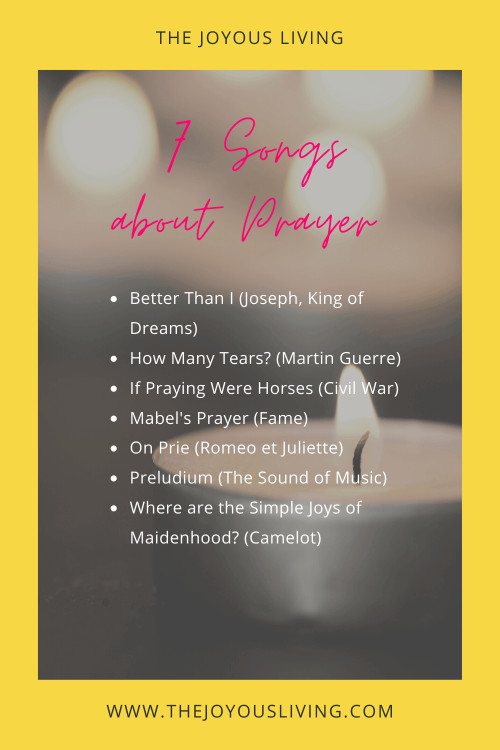 Do you have a favorite song about prayer from the musical theatre world?