Waitress the musical has rolled into Los Angeles as part of its first national tour. With music and lyrics by Sara Bareilles and a book by Jessie Nelson, the show is a very entertaining and fast paced musical comedy that pays tribute to the original motion picture written by Adrienne Shelly. The music by Sara Bareilles will have you most likely tapping your feet for most of the show and Jessie Nelson’s fast-paced Book will have you checking your watch at intermission in amazement at how quickly the time is gone without thinking the story was too quickly moved along for the sake of time.

For those of you that don’t know the movie starring Kerri Russell and Nathan Fillion, the story revolves around Jenna, Played here by the incredibly talented Desi Oakley, a pie baker and waitress in an undisclosed Southern State. Jenna is surrounded by two of her best friends at the pie diner she works at whom are played by the equally charming and talented Lenne Klingaman and Charity Angel Dawson. She is also unfortunately in an abusive marriage with Earl, played scarily well by Nick Bailey, and finds himself pregnant with the baby she does not want. That leads her to meeting the new doctor in town, Dr. Pomatter, played by adorable Brian Fenkart who reminded this reviewer of the original Dr. Pomatter played by Nathan Fillion. Against her best instinct, Jenna begins an affair with her doctor while trying to save enough money to enter a pie baking contest and with the winnings leave her husband Earl.

Before what appeared like a jam packed audience on opening night at the Pantages in Hollywood California, the actors received countless laughs and heavy applause for nearly every scene and/or song. Surprisingly the strongest and lengthiest applause went to supporting actor Jeremy Morse who plays Dawn’s nerdy but winsome suitor, Ogie.

The second strongest applause of the night rightfully so went to leading lady Desi Oakley for her 11 o’clock number “She used to be mine”. Personally, my girlfriend’s favorite numbers were the relatively lighthearted baking numbers in Act I such as Desi Oakley’s “What’s inside” and “what baking can do”. My favorite number was the redeeming second act “Everything changes” by Desi Oakley once again. Seriously that lady has one incredible Voice that I could listen to all day!

Vocally this was one of the strongest casts I have had the pleasure of hearing in quite some time without a single low note. All three leading ladies were fabulous in their roles and the supporting gentlemen who Played their love interests were entertaining and carried their own musical numbers brilliantly.

Because of the questionable adult content that appear to have been amped up since the 2007 movie, I was perplexed as to whether I should be rooting for extra marital affairs on two of the ladies parts and whether this was even a show I should be recommending.

For that reason neither of the three romantic interest could be classified as a true hero. Like my friend said, there were no literal villains aside from the abusive husband, who gave one of the most well-rounded performances of the show, but you just can’t like a man that carries on an affair while seemingly in a happy marriage with a woman who we see with our own eyes trusts and adores him, at least if you’re brought up to believe affairs are a no no. 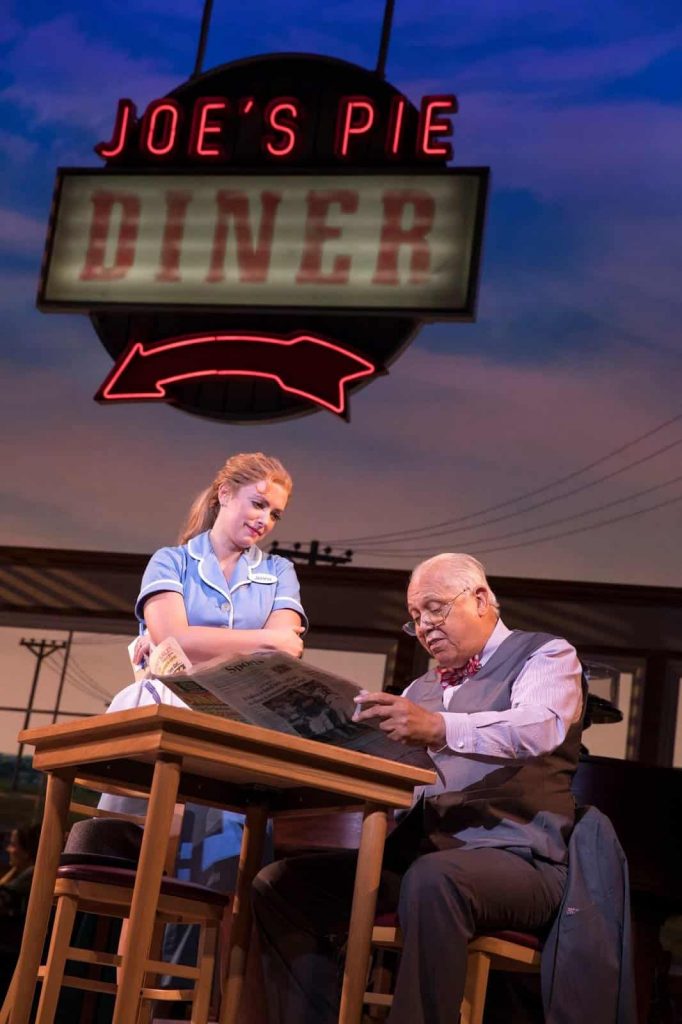 The Redeeming Heroes of the Story

The redeeming heroes of the story have to be supporting actors Larry Marshall as Joe, the proprietor of the pie shop, and the hilarious Meisha McQueen as Nurse Norma. Both Marshall and McQueen give the best eye rolls and meaningful looks when faced with the evidence of Jenna’s affair with Dr. Pomatter. Similarly they are given the best lines.

“You probably shouldn’t be having no affair… Not to mention the pain you could cause to other people…. Leave your husband fair and square and [after] smudge your lipstick with whomever the h*** you want.” – Joe.

But really it is motherhood that finally gives Jenna the chance to break free from the bad relationships she is in and choices she has made leading up to this. When faced with her pregnancy, Jenna never considers abortion, a decision that earns two thumbs up from this reviewer and makes the character likable for deciding to go through with an unwanted pregnancy despite being in an abusive marriage she’s trying to crawl out. However she does not deny her lack of interest in this baby. All that changes when she meets her baby girl, Lulu, who she sings about in the gorgeous “Everything Changes”:

You’ve saved me/ My blurry lines, my messy life/ Coming to focus and in time, maybe I can heal and I can breathe/ Cause I can feel myself believe

All in all the musical is very faithful to the 2017 movie aside from the unnecessary comedic sexual scenes where characters stimulated sex that made me glad I had not gone to see this show with a guy friend or my father. The music and lyrics by Sara Bareilles are catchy and entertaining. The lyrics for the most part are plot driven. Jessie Nelson’s book was faithful to the dialogue from the late Adrienne Shelly’s movie and the story plot moved fluently along with clever use of the staging and set design by Scott Pask. The decision to include the minimal band on stage as part of the diner was brilliant and similar to last year’s tour of Bright Star at the Ahmanson it was great to see the cast interact with the musicians which helped create an organic environment.

Again a shout out to the brilliantly talented cast that could hardly be any better than any Broadway casting I imagine. And a special shout out to ensemble member Gerianne Perez (understudy for Dawn) whom my eyes kept drifting towards whenever the ensemble was featured.

Who is this Show Appropriate For?

I would personally recommend leaving the kids at home and any young teenagers who are not ready to deal with the adult content, referring primarily to Jenna’s abusive marriage and the two extra marital affairs going on. Also bear in mind the sexual scenes where characters simulate sex. They may not remove their clothes but nothing much is left to the imagination and it’s hard to know if the writers are encouraging the audience to support and applaud the choice for sex outside of marriage. There is also adult language with numerous uses of the Lord’s name in vain. 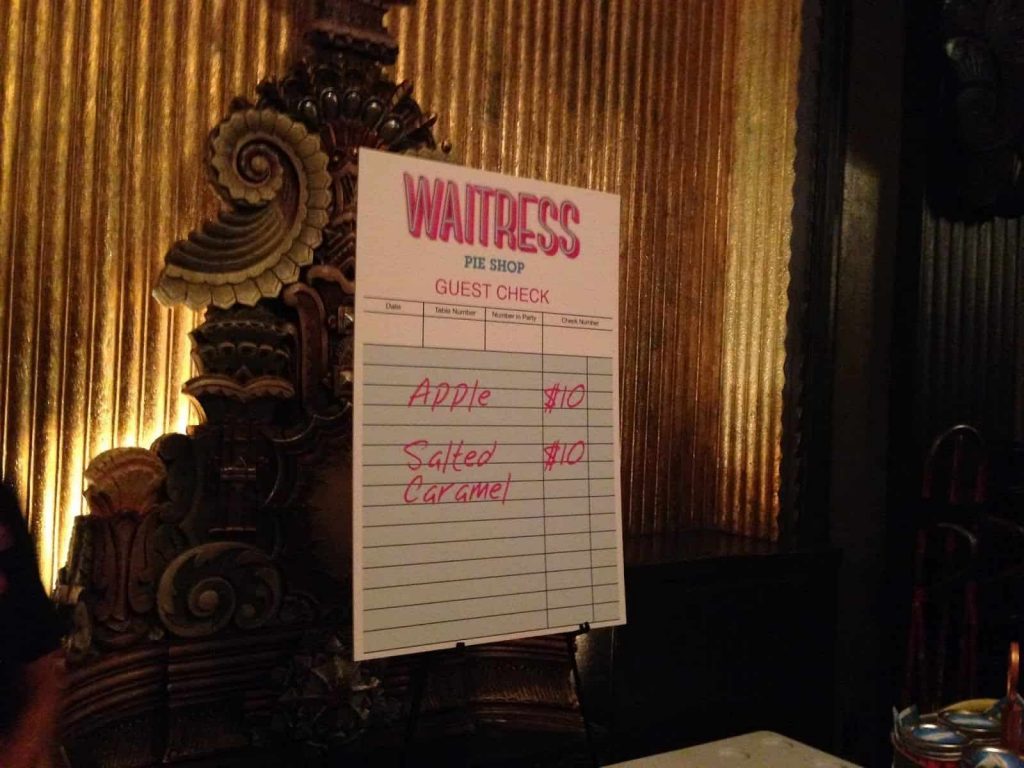 Souvenir Pie in a Jar

In closing, a shot shout out to the producers for the brilliant idea of having pies in a jar for sale in the lobby. The price is high. At $10 dollars you can easily get yourself a slice of pie at Marie Callendars or dessert at Cheesecake Factory and still have change left over. However it makes for a fun souvenir with the glass jar you can keep and a great experience of eating pie while watching the ladies on stage baking away and some of the characters even eating the pies that are apparently provided by Whole Foods. I asked the lady selling pies if these were Sara Lee pie and she said someone else baked them. She would not disclose any more information.

Also beware that apparently they are only allowed to give out one spoon with each jar purchase. So if you plan on sharing like we did, either grab a napkin to wipe off the spoon in case you are germaphobic or pack in your bag a small sample spoon as you would get it at any gelato or ice cream shop. In Los Angeles your choices for pie are Apple crumble and chocolate salted caramel. We tested out the chocolate salted caramel and found to be delicious, creamy, but very rich. So it was a good thing we shared because I don’t know if I could finish to myself.

If you’re going to buy a pie in a jar, I suggest skipping the bar which is crowded and head straight to the table of pies by the auditorium doors which was much less crowded.

Enjoy the show that celebrates girlfriends and motherhood! And apparently this will be Desi Oakley’s last stop on the tour so if you can I would highly recommend getting tickets for the Pantages stop in order to witness her fabulous performance.

And if you are looking for a Spotify playlist as you head into LA to see Desi and the cast of Waitress in August, try her “Baker’s Dozen” Spotify Playlist here.

Disclaimer: My ticket was generously comped by The Pantages Theatre but the opinions are all my own. 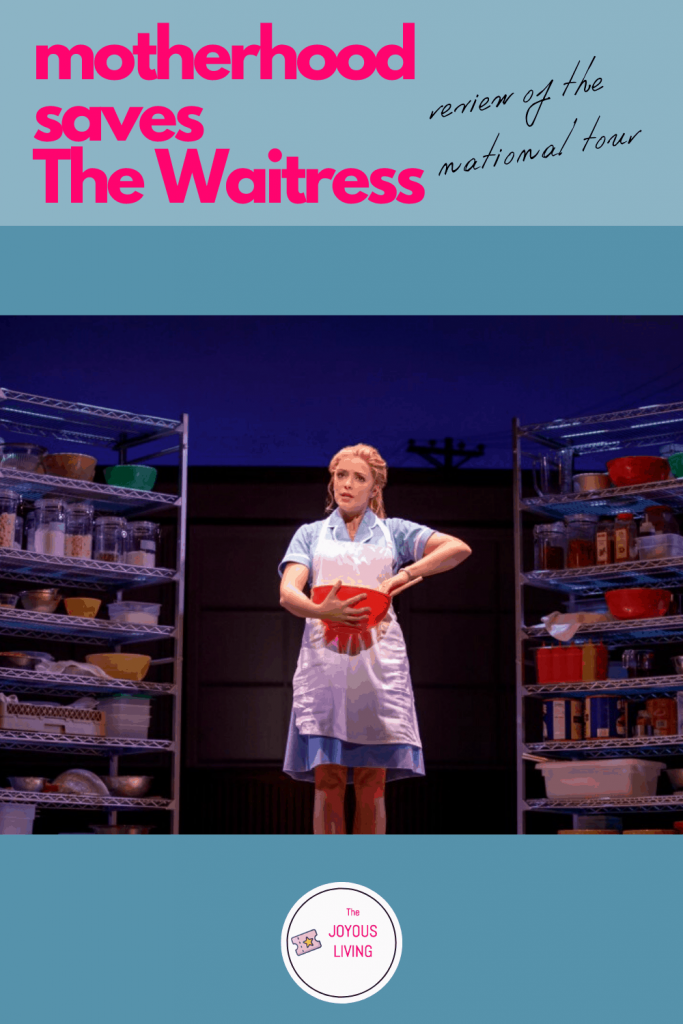 What is your favorite pie?

2 Comments on Motherhood Saves THE WAITRESS at The Pantages!