The Heat is on in Los Angeles as the A++ cast of the U.S. Tour of Miss Saigon lands in town for a brief month at the Hollywood Pantages Theatre.

For those who don’t know the story, it is based on a photo Schönberg found in a magazine of a Vietnamese mother dropping off her child to meet its American GI father who could better support the child. Schönberg considered this mother’s actions for her child to be “The Ultimate Sacrifice,” an idea central to the plot of Miss Saigon.

Kim (Emily Bautista) meets American GI Chris (Anthony Festa) at the end of the Vietnam War in Engineer’s (Red Concepcion) seedy bar and promptly falls in love. Three years later, the war has ended and Saigon is now Ho Chi Minh City. Kim has given birth to Chris’ son (Tam) and lives with the hope of being reunited with her lover. Chris though is now married to an American woman named Ellen (Stacie Bono) despite being constantly traumatized by dreams he has of Kim and the fall of Saigon.

Based on the 2014 revival of Boublil and Schonberg’s Miss Saigon, the material appears darker and grittier than some might recall previous tours and regional productions.

Although the majority of the characters are broken and flawed, it is France’s colonialism, the Vietnam War and America’s involvement that are the show’s antagonists. As John says

It’s not you, it’s war that is cruel.

That directional choice by Laurence Connors allows for characters like Thuy (Jinwoo Jung)  and The Engineer (Red Concepcion) to be more complex and possibly even sympathetic while American GIs John (J. Daughtry) and Chris (Anthony Festa) come across as less heroic.

Kim (played brilliantly by Emily Bautista, who understudied the role of Kim on Broadway in 2017) is still the backbone of the show with her innocence when she first meets Chris in Saigon and later sacrificial strength as a mother after the war. You can read the emotions on Bautista’s face and her powerhouse Act One finale is heart-achingly beautiful.

The Engineer (as played by Red Concepcion, from the U.K./Ireland Tour) is so different from Jon Jon Briones (2014 London Cast Revival) ramping up the dark comedy and crass abuse that makes you want to laugh and to punch him at the same time. His “The American Dream” sadly echoes close to what many think of as the dark truth of America – corruption, tawdry capitalism, overhyped sexuality – and yes there is even a President Trump reference. See if you can catch it.

Chris (Anthony Festa) and Ellen (Stacie Bono) are deeply conflicted characters in this new retelling of Miss Saigon. They both believe they are doing good and yet it is through their naïvety and selfishness (especially in the now flawed updated “Confrontation”) that the worst happens. As John says,

Those who worry this show demonstrates a ‘white savior’ need not fear. There is no hero come to rescue Kim and the victims of Vietnam. Sure, Chris thinks he will ‘save’ Kim but we all know that is a failed attempt. And while Ellen’s new song “Maybe” is supposed to be more sympathetic it just further illustrates how lost and useless Ellen is in a world she does not understand.

If anyone comes out transformed it is John (J. Daughtry) – the African American best friend – who goes from despicable and abusive GI in Saigon to an advocate for the Bui Doi and to a lesser degree, Kim and Tam, during Act II.

After my interview with Korean actor, Jinwoo Jung (Thuy), I was excited to see his performance and interpretation of Thuy’s heart. I was not to be disappointed. Similar to 2014 when Korean actor Kwang-Ho Hong gave a three dimensional portrayal that had reviewers wondering at Kim’s choice between suitors, Jinwoo Jung’s Thuy was conflicted especially during “Coo-Coo Princess/You Will Not Touch Him” and you could sympathize with his choices and inner turmoil. SPOILERS: When Kim is being tortured on his orders he can barely watch he’s so conflicted and upset that he must finally intervene and you could have sworn those were real tears in his eyes when he was faced with the “need” (according to his idea of honor) to kill Tam. Interestingly his performance reminded me of Sean MacLaughlin in EVITA at the Pantages in 2013.

His performance was altogether too brief.

In the most interesting casting decision was Laurence Connor’s choice to cast Christine Bunuan as Gigi. Bunuan makes full use of Connor’s decision to portray Gigi as older, jaded and motherly towards Kim and the other girls.

A big shout out to the production design team of Totie Driver and Matt Kinley – wow! The set is dark, brooding, broken and perfectly compliments the show.

Bruno Poet‘s lighting design is a perfect pairing highlighting all the purposeful defects of the set and the horrors of the war and Kim’s circumstances.  I won’t spoil it for you but at the climatic Act I finale I was left speechless by the dramatic and powerful use of lighting.

And in a day when projections have become common place in theatre, it was refreshing to see very little use of projections aside from Bui Doi and American Dream. And yes — o yes — “Kim’s Nightmare” was FANTASTIC!

Accessibility: There is no elevator to the mezzanine level. Although there are no stairs in the orchestra, note that there is a steep embankment leading up from the front of the orchestra level into the foyer.

Running Time: Two hours and 40 minutes, including one 20-minute intermission.

Rating (by The Joyous Living): R for adult situations (including sexuality) and adult language

Disclaimer: I received my tickets for review purposes from the Pantages Hollywood Theatre but all opinions are my own. 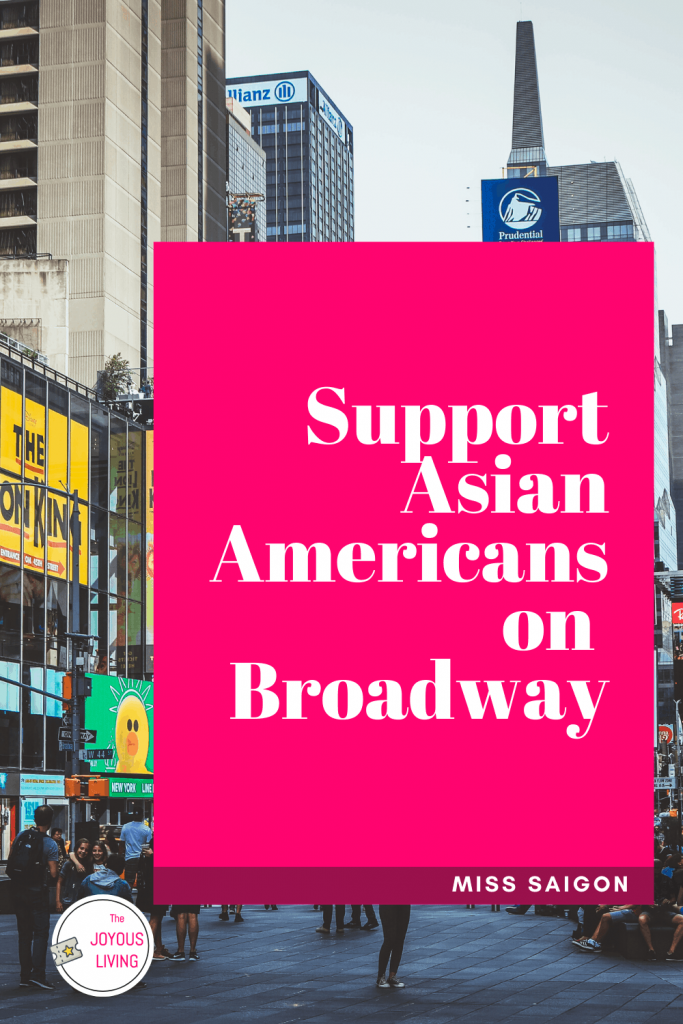