Miracles from Heaven is a MUST SEE if you or anyone you care about has ever battled a life-altering disease, questioned where God is in all the mess of life, or just loves a good tear-jerker (BRING THE KLEENEX).

Let’s start with the major question most anyone is going to have — how cheesy, questionable and over the top is the “miracle”? Allow me to preface this by saying that the miracle does not happen until over seventy-five minutes into the film and by the time 10-year-old Anna Beam (Kylie Rogers) is healed, the film has hopefully moved the audience beyond the rudimentary question Christy (Jennifer Garner) asks Dr. Nurko (Eugenio Derbez):

“Can you tell me how? Can you explain it to me?” – Christy Beam

And you’re nodding your head in agreement with Dr. Nurko when he says that he “can’t medically say” that little Anna has been cured. We cannot explain the healing or what happened in the trunk of the tree. Some of us will agree it has to be a miracle, others will just shake our heads in amazement and still, others might be skeptical of the Beam family account.

But whatever your beliefs, the message of Miracles from Heaven is that “every day is a miracle” and the power of faith and people’s kindness. And what a great and positive message that is for this Easter season.

Moving on…
The film centers primarily on the relationship between mother and daughter (Garner & Rogers) and their interactions with father Kevin (Martin Henderson), sisters (Brighton Sharbino, Courtney Fansler), good Samaritan (Queen Latifah), Boston Children’s Hospital staff, and their home pastor (John Carroll Lynch). The chemistry is palpable between Garner and Rogers and I only wish the two women will be acknowledged by some film awards committee for their heart-wrenching performances.

‘s portrayal of Christy Beam is believable and strong. She is a mother who will not take no for an answer and doesn’t hesitate to take her dying daughter to Boston without an appointment. If her daughter needs to see the best doctors in the world then she will move heaven and earth to make it happen. What woman cannot relate to her struggle and strength?

Kylie Rogers plays a ten-year-old girl who has been ill and in excruciating pain for months seeing specialist after specialist before finally receiving the diagnosis that she has an incurable disease. Talk about a bitter pill to swallow but she demonstrates inner strength and peace, resilience, wisdom beyond her years, and yet at the same time you are never able to forget she is just that, a ten-year-old girl who should be playing soccer with her friends and sisters instead of drinking her food through a tube. One particular moment in the hospital when she hits her lowest is especially powerful and you cannot help but really feel for the pain she is going through. I honestly wanted to give this little girl a standing ovation after watching the film.

As I said, this is primarily Christy and Anna’s story but Martin Henderson deserves a huge shout-out for his supporting role as father Kevin. He is stuck at home supporting the family, paying medical bills, caring for the other two children in what might be thought of as a thankless role. But really what an outstanding performance by an often overlooked actor. His eyes are like a window into the soul of his character. Watching him fight to keep his family together and get through this indescribable ordeal is mesmerizing especially because he does it with such a quiet grace.

As someone who is struggling with a hard-to-explain disease (by no means on the same level as Anna’s!) I found myself especially relating to this film’s story and rallying behind the Beam family.

And if my friends and readers have a spare couple of hours this Easter/Passover season, might I recommend a visit to see Miracles from Heaven? Don’t let the fact that it is about a “miracle” turn you off, o skeptical ones. Trust me, I was one of those skeptics!

And if you are worried it will be preachy, rest assured that Sony Pictures has done a great job of finding pieces that include a Christian message without being overly preachy or riddled with a poor script and soundtrack. Much like their 2014 Moms’ Night Out, there are several scenes in church, and a few brief talks about God but no hammer is being wielded.

There are real people being depicted with real struggles and real concerns.

Life for believers isn’t cookie-cutter and neither is this film. The only questionable moment for me was a rather lengthy montage mid-film to a Third Day rock song (Your Words). I liked the montage but it could probably have been cut by half.

So do yourself and your family a favor and grab a box of Kleenex, curl up together, and see Miracles from Heaven. And then give each other a big hug no matter your beliefs and be so grateful that “every day is a miracle”. 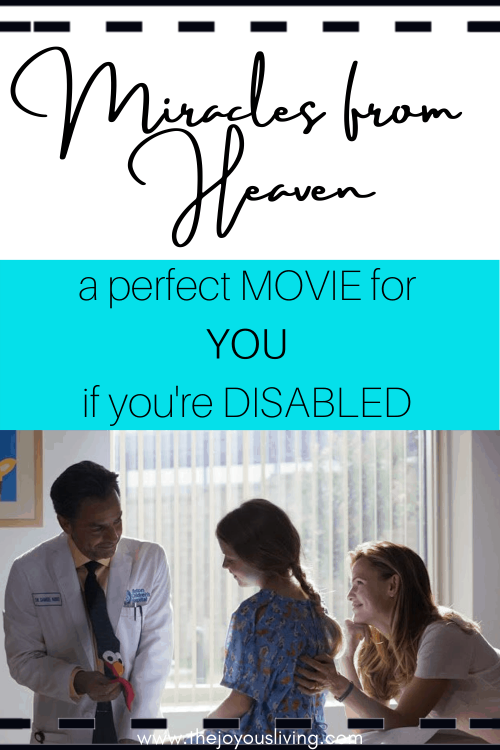 16 Comments on Miracles from Heaven is Heart Warming