Cabrillo Music Theatre has produced a truly memorizing and practically perfect production of Disney’s Mary Poppins. In town for a limited time (closing Sunday, April 26th), Cabrillo’s Mary Poppins promises to be one you’ll be speaking of for a long time to come!

Cabrillo Music Theatre is a local community theatre in Thousand Oaks, California, and boasts 7 Ovation Award wins! The talent and productions are always top-notch and could easily rival any equity national tour you’d see in L.A. with its incredible artistic team – including choreographer Cheryl Baxter who started her career as the assistant choreographer to the one and only Gene Kelly – and ability to draw four A.E.A. guest artists.

For this production of Mary Poppins, we are thrilled to have composer Richard Sherman‘s own choice for Mary Poppins – Juliana Hansen, whose vast resume includes being a finalist in Sir Andrew Lloyd Webber‘s Grease – You’re the One That I Want! t.v. series, Millie in the first non-equity tour of Thoroughly Modern Millie, Jasmine in Aladdin at Disneyland California Adventure, and Jane Bennett opposite Laura Osnes in a world premiere of Pride and Prejudice at Eastman Opera.

She is joined by equally talented Wesley Alfvin (Bert) who is no stranger to the Southern California theatre scene with a resume chalk full of work at Candlelight Pavilion, The Norris Theater and El Segundo Broadway in the Park, Michael Scott Harris (George Banks) [who nearly stole the show with his rich tenor voice] who previously toured the U.S. as Piangi in the 3NT of The Phantom of the Opera and Ovation Award winner Michelle Lane (Winifred Banks) whose regional resume includes Side Show, She Loves Me and Chess. 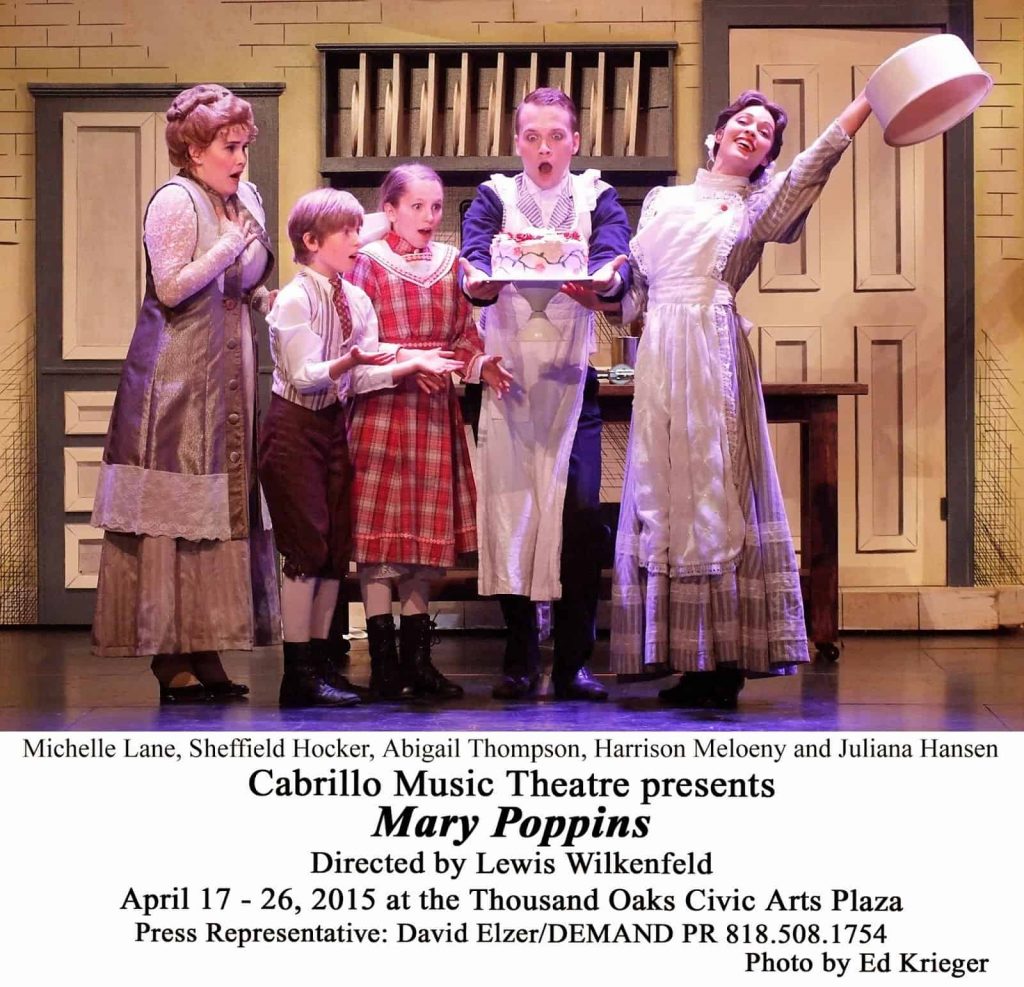 They are surrounded by an equally talented and energetic ensemble and some of the cutest children as Jane and Michael Banks. On opening night, I saw Abigail May Thompson and Sheffield Hocker who brought their A game to the show. Featured cast members included Tania Pasano Storrs as the iconic Bird Woman and Karen Sonnenchein as Miss Andrews also brought their A game and were truly entertaining and memorizing but truthfully the show belonged to the four A.E.A. principles. 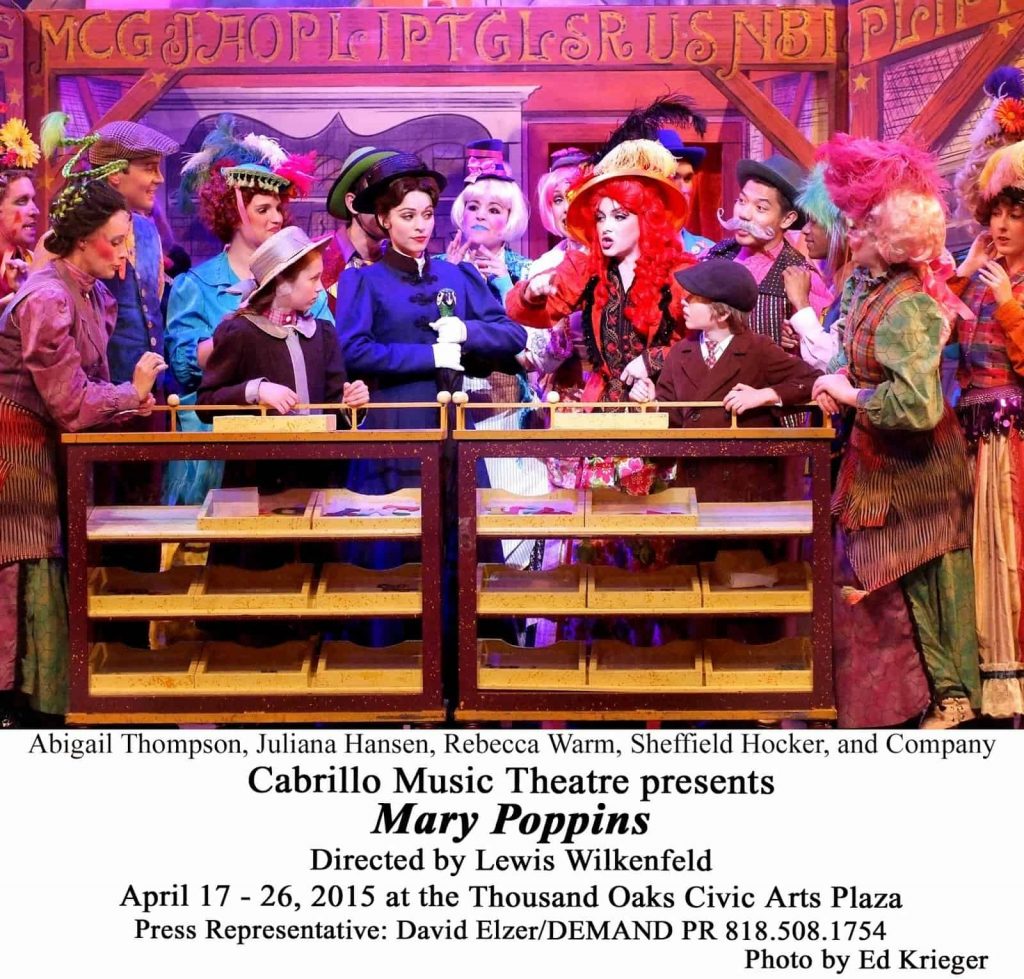 Now, in case you aren’t as familiar with the Broadway show, Mary Poppins, as me, might I take a moment to explain. If you go to see this production expecting to see the original movie come to life, you will be disappointed. This is a regional production of the Broadway musical with a book by Julian Fellowes based on the stories by P.L. Travers.  Songs by the Sherman brothers are still there along with new songs written by George Stiles and Anthony Drewe. New characters (from the Mary Poppins book series) have been added and the story has been returned to its original 1930s time.

So go into the show with an open mind and you’ll be blown away as my best friend, L, and I were.

The one and only Richard Sherman was in the audience on opening night and he and the audience gave Wesley Alfvin and Juliana Hansen a hearty and deserved standing ovation. I won’t spoil any of the magic of the show but will just say that the ladies sitting next to me in the audience were full of awe and admiration for the show and couldn’t stop talking about it on their way out of the auditorium. 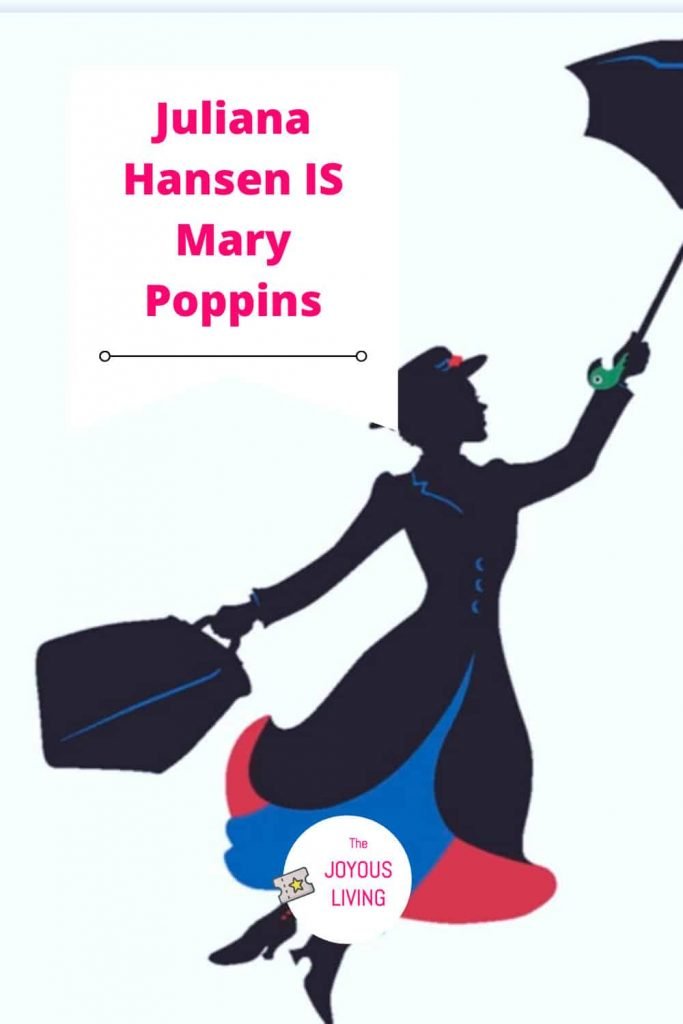 Which Disney movie would you love to see made into a live stage musical?