Director and writer Mark J.T. Griffin shares about his upcoming period drama, Lawrence: After Arabia that wraps up the trilogy of films about T.E. Lawrence’s life. 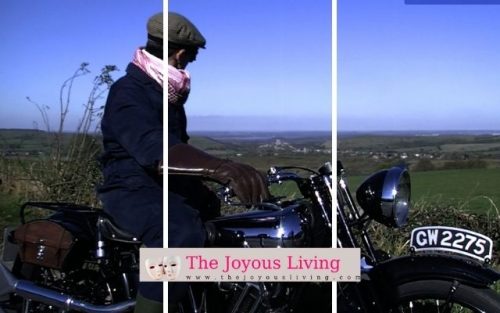 Sadly Mark J.T. Griffin and the crew had to postpone their planned 2020 premiere due to the pandemic but hopes are that it will premiere in the UK in Autumn 2021.

This independent movie tells the story of the last year of T.E. Lawrence’s life and completes the trilogy of films about his life, following one of the best films ever made, Lawrence of Arabia – a favorite of Steven Spielberg.

So it is with great excitement that as part of my A to Z Challenge Authors and Artists series, I share not only some snippets about the movie but also an interview with Mark J.T. Griffin to whet your appetites!

What is Lawrence: After Arabia About?

Retiring to his cottage in Dorset, Lawrence (Tom Barber-Duffy) hopes to forget his past fighting in Arabia but soon he is drawn into political intrigue and his many enemies begin to plot against him. Was a motorcycle crash an accident or attempt at assassination by the British Secret Service?

Lawrence: After Arabia tells the story of the last years of the life of the 20th century hero, T.E. Lawrence – Lawrence of Arabia. Lawrence was a writer and poet with friendships with GB Shaw, Thomas Hardy, Henry Williamson, EM Forster, Siegfried Sassoon and others but he was also a political agitator and good friends with Winston Churchill. Lawrence lived at Cloud’s Hill, his simple cottage near Bovington in Dorset where he spent years escaping the “Lawrence of Arabia” and hero epithets by using pseudonyms and changing his name. He still had strong ties with his Arab friends, was building bridges with Mosely and the Blackshirts and was also be prepared for a leadership position in the Secret Service.

In common with many other soldiers, he suffered from depression and post traumatic stress disorder. His uncompromising and direct manner and beliefs created many powerful and influential enemies.

Chronologically the story follows on from David Lean’s Lawrence of Arabia (1962) with the late Peter O’Toole playing Lawrence and Dangerous Man: Lawrence After Arabia (1990) with Ralph Fiennes who played the title role. 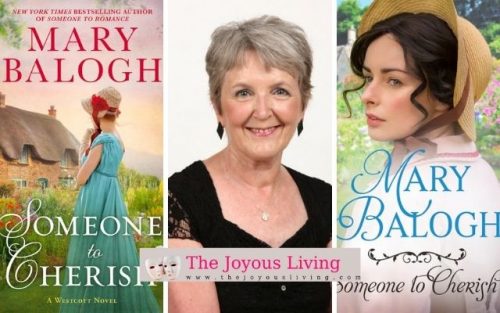 The screenplay is a British period drama and a character study of a man that uses extracts from letters and other contemporaneous documents from the period to reconstruct the final years of Lawrence’s life, the accident, inquest and his funeral and why the authorities want to eliminate him.

Cast of Lawrence: After Arabia

The cast of Lawrence: After Arabia is helmed by the talented Brian Cox as Epilogue/Father (Voice).

and Tom Barber-Duffy as T.E. Lawrence

Trailer for Lawrence: After Arabia

Tell us about your interest in the life of T.E. Lawrence?

Mark J.T. Griffin: I became interested in T.E. Lawrence when I was very young – I read about him and visited the places he was connected to around Dorset.  Of course I saw David Lean’s Lawrence of Arabia with Peter O’Toole and some years later Dangerous Man with Ralph Fiennes.

Why the focus on Lawrence of Arabia’s death?

Mark J.T. Griffin: Lawrence was involved in a motorcycle accident on his Brough Superior and died six days later. At the inquest a witness described seeing a black car just before Lawrence lost control of his bike which then careered into two boys on bikes.

The more I researched this incident it seemed to me there had been a cover up – a conspiracy to get rid of Lawrence. He had been involved in infiltrating Moseley and the black-shirts, was in contact with King Abdullah of Trans-Jordan about an Arab uprising and was possibly being groomed for a job to reinvigorate the Secret Service.

When did you decide to film Lawrence: After Arabia?

Mark J.T. Griffin: I originally wrote a radio play, which morphed into a screenplay. Around 2017 I sent the screenplay to about 60 production companies to see if there was any interest in filming the project and while I had encouraging feedback no one wanted to take it on.  I think in 2017 I decided that if no one else wanted to film it then I would!

With previous actors like Peter O’Toole and Ralph Fiennes playing Lawrence the choice for an actor to play him must have been a hard one?

Mark J.T. Griffin: I decided at the start not to cast an actor with the same stature and looks. T.E. Lawrence was only 5ft 6in, but I wanted the intensity from the actor, a heroism but sensitivity in the actor. Lawrence is played by Bournemouth actor Tom Barber Duffy, who’s been in the Imitation Game and Downton and he has what I wanted in spades.

What was your experience like directing your first film?

Mark J.T. Griffin: This was my first time directing a film though I’ve had directorial experience in the theatre. It was the technical side of filming I was most worried about so I began to search for a Director of Photography to help and guide me. I wanted someone who was interested in the subject and the period vision I had. Eventually I found Simon Lawrence who had worked mainly in TV and is a very talented still photographer also. He has been awesome in guiding me through the process.

We kicked off Pre-Production in January 2018 and chopped the filming into four separate “long-weeks”. Our first was in October 2019 ostensibly to give us footage for trailers, we followed this up with shoots in March, May and June 2019. We completed the shoot 23rd June 2019 and the film was ready by February 2020. We hoped to release in May 2020 but of course Covid19 has pushed our premiere back. We now have date of 21st May 2021 for the premiere in the UK.

I was lucky enough to have a great team and a fantastic crew. Everyone doubled up on roles as production assistants, boom operators, setups and so on, what was needed when it was needed. We all “mucked in” – making tea, anything that needed to be done and used to have a saying which was “I bet Ridley doesn’t have to do this!” Mind you I’m sure he does occasionally!

What was the most difficult day to film?

The small hair, makeup and costumes teams worked their socks off! The scenes were filmed at Moreton Church where Lawrence’s funeral was held and due to access to the church and around it we had to film the service, procession and dialogue scene in a whole day which we did.

We celebrated with a BBQ at the end of the day, which was a great way of wrapping up.

How was the filming of the ‘accident’?

Mark J.T. Griffin: The accident/assassination was filmed over two days.

We were very concerned about the choreography of the whole thing so not only had storyboards but also created the Lawrence Accident Lego Movie so we could try out things to get the scenes right when we got on set.  Saved us a lot of pain and discussion. We found a section of road, which we closed, which was perfect – very similar to the original location.

Over the two days we had a vintage bike and a Wolsley car, a Brough Superior (worth about £250k) which needed to be “crashed” without damaging it, a drone, GoPro and of course camera, sound, cast and crew all without direct power with a generator 200 yards away from the action! Great fun!

What original locations did you use?

Who was your favorite character from the movie?

Mark J.T. Griffin: Tom has hit the spot of course – he’s a very vulnerable Lawrence but my favorite character is Tyrell – the bad guy – who is played by Steve Rollins and I loved Steve’s performance – very nasty! Awesome!

Tell us about the soundtrack for Lawrence: After Arabia?

We also have Rick Wakeman and Guy Protheroe of the English Chamber Choir, who have created orchestral/choral, piano and acapella versions of the hymn “Jesu Lover of My Soul” for the funeral scenes.

We are also completing an anthemic song called “After Arabia”. I wrote the lyrics and Bruce Woolley (from the Buggles) wrote the music, Chris Thompson (from Manfred Mann’s Earthband) sings the track – he’s got a great voice.

What Awards has Lawrence: After Arabia earned so far? 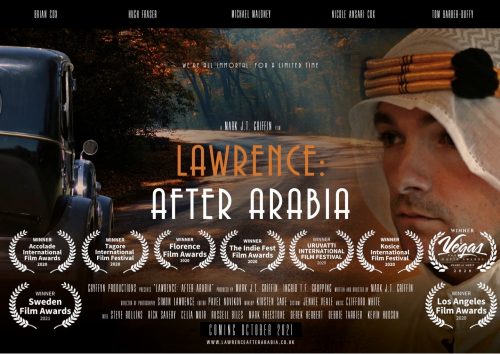 A big thank you to Mark J.T. Griffin for his time and for sharing some about the upcoming movie! Hope it’s helped to whet your appetite. 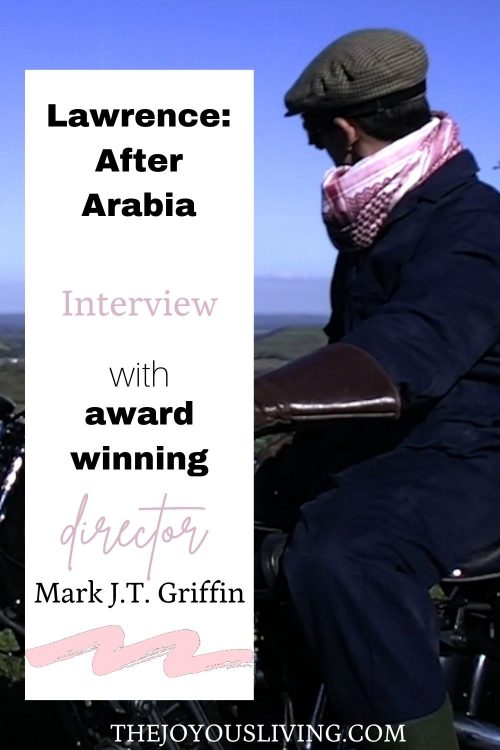 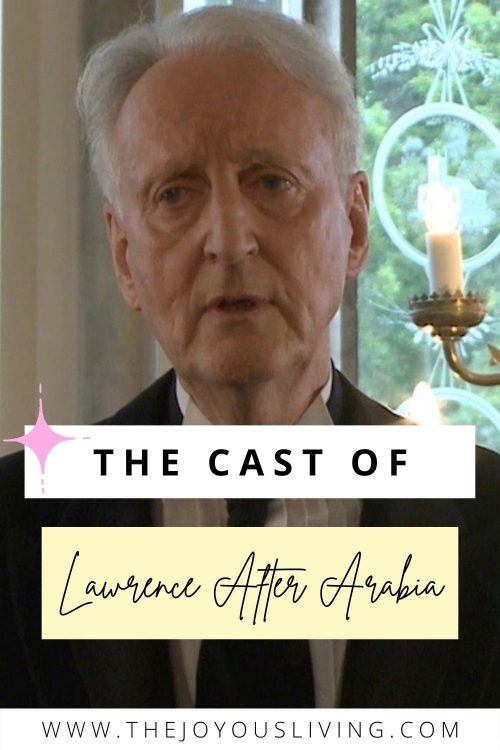 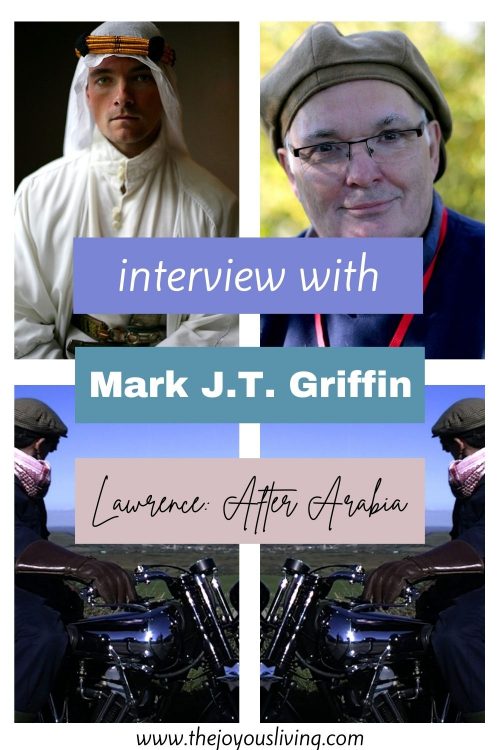 What is your favorite part of the T.E. Lawrence story?