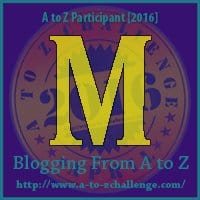 Happy Friday! What an invigorating #azchat last night listening to others share their excitement for the challenge and getting to MOB other bloggers’ pages. I was gratified to have 10 ‘mob’ my page and it’s gratifying to know that my topic on Child Abuse and Sexual Assault has been helpful for you guys! Thanks for your mentions… Means so much! xx

Moving onward – “M”. We’re half way through! And it’s time to talk about those murdering mothers. God forbid they should exist but sadly they do…
I would argue that mothers have the greatest duty of care owed their child. A child comes into this world and/or their household knowing that she is his/her mother and the matriarch of the family who will make them safe. That’s the ultimate duty of care and when a mom misuses her position and murders her young, she does not deserve the title anymore.

So let’s get down to it… Here are a few of the most notorious mother murderers I have heard about.

Megan Huntsman – admitted to strangling and suffocating 6 of her newborns from 1996 – 2006. I repeat, she killed 6 of her newborn children! Acting on a tip from an estranged husband, the police searched her house in 2014 and found 7 (!) dead newborns. The 6 she had suffocated and strangled were in cardboard boxes. And there was a newborn who had apparently died as a stillbirth.

Diane Downs – In 1983, the Oregon mother drove her three children to the hospital emergency room claiming they’d been shot by a carjacker. The true story was much more harrowing when detectives and prosecutors learned Diane herself had killed her 7 year old, paralyzed her son (from the waist down), and caused her eldest daughter to have a disabling stroke due to the gun shots. All so she could persuade her married lover to leave his wife and commit to her. She was convicted of all charges and sentenced to life in prison. The best part of the story is that the prosecutor, Fred Hugi, and his wife ended up adopting and raising Diane’s two surviving children! Love that prosecutor — he gets a special award, right? 🙂 For a gripping retelling of the story, try to find the Farrah Fawcett 1989 movie – Small Sacrifices.

Susan Smith – Similar to Diane Downs, Susan said in 1994 blamed a carjacker. She claimed he had stolen her car (with her two boys in their carseats – 2 year old and 14 months old) but the truth is that she had strapped these two innocent children into their car seats and pushed the car into the lake sending them to a watery grave.

I honestly don’t know of a great sin or crime then for a mother who is blessed with the duty of care and love to kill/murder her own children. Gobsmacked that it is still happening even today with several hundred cases a year. If you’re a mom or dad, give your kids a special hug this weekend and if you are a kid blessed with a great mom or dad, give them a call and say thank you. To think you could have ended up with a mother like Diane Downs or Susan Smith or Megan Huntsman.