Under the direction of Kevin P. Kern, Kingsmen Shakespeare Company‘s production of the oft not performed Shakespearean play, Love’s Labour’s Lost, is a hoot! The ensemble cast, boasting many talented members of the Actors’ Equity Association, works well together as they sing, dance (hilariously – and not to be spoiled! – choreographed by Jeff Wallach), snog, grope, exude pathos and come together in this hilarious romp of a comedy by the Bard himself.

Even if you have never seen this earlier comedy by Shakespeare you will surely pick up on key themes that made their way into his later and better known plays such as Twelfth Night and Midsummer’s Night Dream. And never fret, if you find yourself drowning in Elizabethan English, Kern expertly uses side splitting comedy, campy sequences, and hilarious dance routines (again, not to be spoiled!) to draw the audience in and even breaks the fourth wall inviting audience participation. 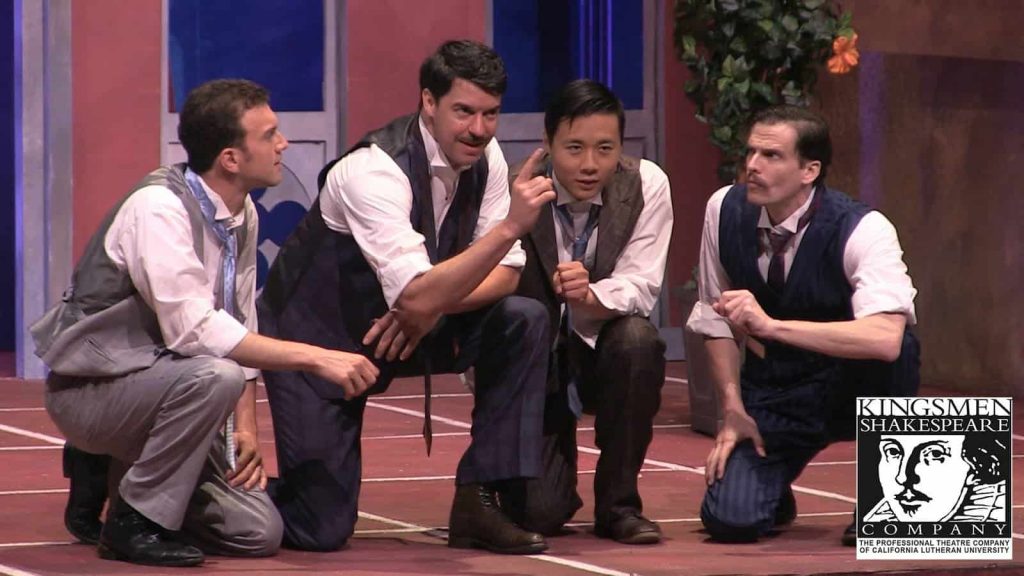 The ensemble cast (whom you will also see in John Slade’s later production of Julius Caesar) are all Aces! The stand-outs have to be Louis Jerry Kernion (as the comedic Costard) who had me holding my side from laughing so much, Samantha Eggers & Ross Hellwig as the stunning Princess and her adoring Ferdinand, Todd Lanker as the lovelorn Berowne who makes use of some of the best lines in the play, and Jason D. Rennie & Thuy Duong as the ridiculous Armando and his page, Moth.

The story is set pre-World War I with gorgeous costumes by Howard Schmitt and fantasy-esque sets by Brian Reed.

For those of you who have never been to a Kingsmen Shakespeare Company production, you are in for a treat. The professional cast and crew have certainly worked hard to bring us not one but two productions this summer (the comedy Love’s Labour’s Lost and the history Julius Caesar). Most performers from this month’s comedy will also be featured in the second production opening on 21 July. 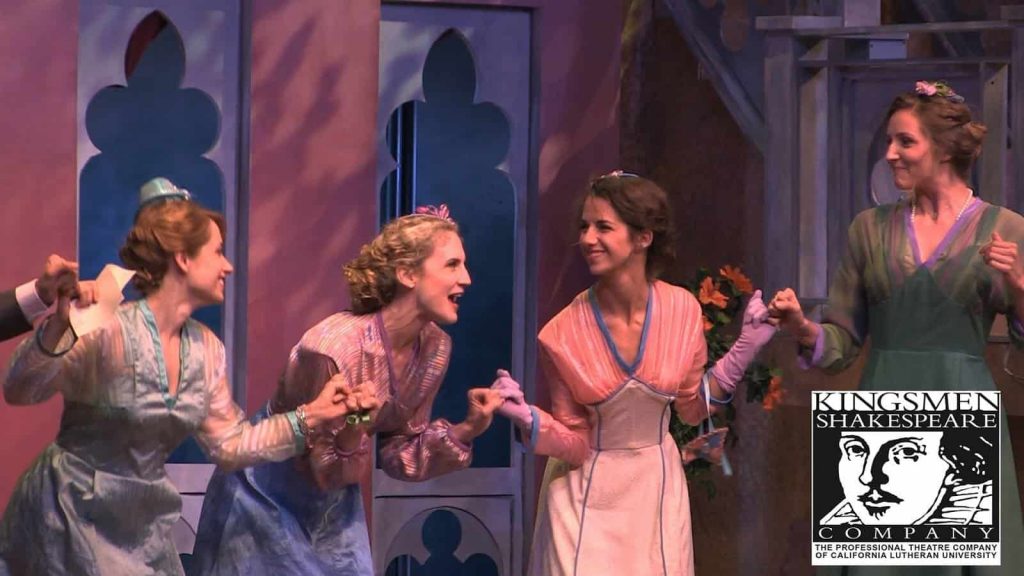 Seating:
There are lawn boxes (room for 4-6 adults) available for purchase meaning you’ll have front and center seating ($90-110).
For the general public, individual tickets can be purchased on the night of the performance for $20 per person (minors under 18 are FREE).

Everyone is responsible for their own chairs and/or blankets. Low chairs are required for the majority of the lawn boxes and all chair sizes are allowed in the general public seating behind the boxes.

As someone who was in the rear of the general public seating, I could see perfectly well, heard all the actors nice and clearly (I am thinking they might be mic’d) and enjoyed being in the open night air watching some Shakespeare come to life.

Coming Early is Highly Recommended:
The park opens at 5:30pm to the public. I would suggest doing as my friend and I did in preparing or buying some dinner en route that you can enjoy at the festival prior to the show beginning. There is a pre-show presentation (approx. 6:45pm/7:00pm) that might help anyone who is not familiar with the material in grasping an idea of what you are about to see!

Accessibility:
I took my walker to the show on 1 July (Saturday) and felt completely comfortable and safe traipsing over the lawn and to and from the parking lot. The website mentions a “hill” that was a bit scary when I read it but thankfully I think it is nothing to dread or be worried about! For those who want to be in the lawn boxes, there are several boxes ($90 each) that allow regular sized chairs for accessible patrons.

And last but not least there are plenty of handicap parking spaces up front of the parking lot and a concrete walk way that leads straight to the entrance of the festival!

Age Appropriate:
I lost count of the number of references to the male anatomy. While there is no sex, violence and language a contemporary audience would find astonishing, there were definitely a great number of sexual jokes and innuendos and Kern made sure to emphasize those jokes with physical props. I imagine those jokes and references might even go over the heads of the young people in the audience but for families it is probably wise to be prepared should your son or daughter ask about a certain character’s sword or why a woman’s mark “should have a prick in’t, to mete at, if it may be”, etc.

Directions from 101-South
Exit Lynn Road
Left on Lynn Road
Continue onto Olsen Road
Right on MountClef Blvd.
Parking is in the first lot on the right.