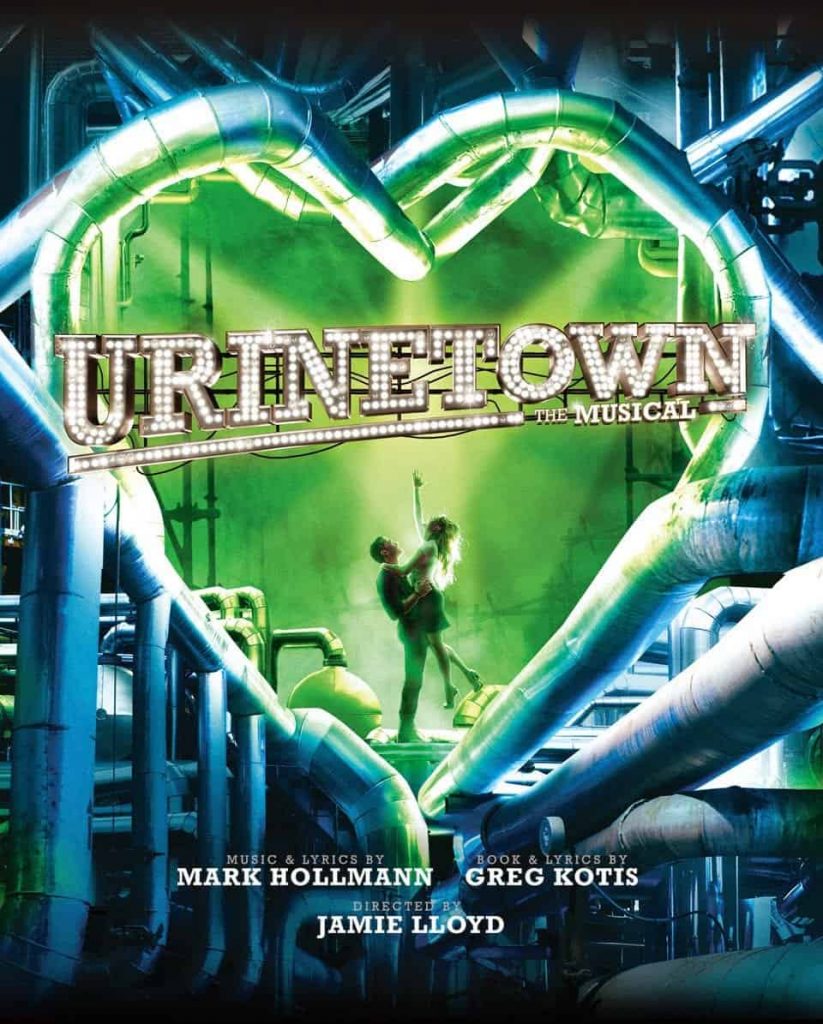 Recently I was invited to see Urinetown: the Musical at the Apollo Theatre where it was enjoying a successful West End transfer. It is truly a strange title for a musical and one that might cause one to reject the show. I remember first hearing about the show when it was playing on Broadway in 2001 with Hunter Foster and Jeff McCarthy and seeing the subsequent U.S. tour that had me laughing and amused for the fastest two+ hours. That said, I was expecting a similar experience at the Apollo Theatre where I did find myself impressed by the two-level set with a turntable floor.

Sadly when my flatmate asked me what I thought — I honestly had to tell her I was uncertain which led me to believe that perhaps it is a show that does not warrant a second viewing because the lesson and shock has been had and there is no where else the show can go? I am still at a loss as to how to describe my reaction to the show.  When the show was touring the United States – featuring Christiane Noll as Hope and Tom Hewitt as Officer Lockstock – the consensus was that the show was “groundbreaking, endlessly clever and surprisingly smart satire” (Denver Post). This time around – a dozen years later, despite all the same catchy musical numbers and the incredible (I repeat – INCREDIBLE!!!) performance by RSC’s Jonathan Slinger as Officer Lockstock, I felt the show was trying too hard and considering that the show is a satire making fun of musicals, legal systems, capitalism, social irresponsibility and the list goes on that is pretty tough to do but somehow the show came off as just that — trying too hard.

Jonathan Slinger IS superb as Officer Lockstock giving the role originated by the fabulous Jeff McCarthy a fresh reading with the perfect combination of sadistic and loveable. His commentary and dissection of the musical was LOL-funny and had the audience and myself laughing and smiling brooding throughout. It’s incredible to think that this talented actor is just now making his musical theatre debut.
The role seems written just for Slinger’s musical theatre debut following a thriving career at the Royal Shakespeare Company with the witty and simultaneously thought-provoking discourse and narration of the show’s proceedings.
The rest of the cast are talented and sing lovely but the show is 100% Jonathan Slinger’s! If you have time, you might enjoy a visit to the Apollo Theatre where Jonathan Slinger is playing Officer Lockstock in Urinetownthe Musical.

Trending
Why You Should Give Persuasion on Netflix (2022) a Chance
Parental Advice from Yours Truly: The show does not delve into crass potty-humour. However there are adult situations and violence (heightened since 2001’s Broadway run) and satires about social responsibility and faith that could lead to conversations… That said, I would not recommend parents bring kids under 13. But of course, to each your own!
Disclaimer: My ticket was generously comped but the opinions are all my own.