Jane Austen’s Sanditon arrived on American screens care of PBS. As I shared, the series is based on the unfinished final manuscript of Jane Austen and centers around a young Charlotte (played by Rose Williams) who has been raised innocently at her parents’ country estate (similar to Northanger Abbey‘s Catherine). A chance meeting with gregarious Tom Parker (Love Actually‘s Kris Marshall) and his kindhearted wife, Mary (Kate Ashfield), who speak so warmly about Sanditon, a new seaside resort on the cusp of change, that Charlotte is inspired to return to the resort with them for the season.

Unfortunately, all the beautiful people she meets are not as above board as they try to impress upon Charlotte which leads to the majority of the drama for Season One.

A Character Worth Cheering On

The majority of characters in Andrew Davies’ adaptation of Jane Austen’s Sanditon are not likable. The most likable character would be Kate Ashfield‘s Mary Parker who reminds this reviewer of other Austen favorites such as Aunt Gardiner (Pride and Prejudice), Mrs. Weston (Emma), Eleanor Tilney (Northanger Abbey), and Sophia Croft (Persuasion) who often end up providing wisdom to our young heroine when she is teetering on the edge.

Mary Parker we discover in Episode 3 is frustrated in her marriage to Tom Parker (Kris Marshall) mostly because he appears to be putting his lofty goals for Sanditon above his marriage and family. Staying true to the regency constraints of Jane Austen’s writings, Mary is confined to the home where she seems to be a loving mother and finds solace and comfort in her young and sweet house guest, Charlotte. But what is so very lovable and relatable is Mary’s inner strength and persistence. I have no doubt we’ll get to see more of her standing up for her marriage and family in further episodes.

Evil Has a Name

Sadly, Ashfield’s Mary Parker is the rarity in the series. Evil has a name and it is – Clara, the seemingly sweet and innocent victim who proves in Episode 3 just how creepy she is and to what depraved lengths she will go to stay in Lady D’s good graces and supported by her purse.

Meanwhile, the gorgeous redheaded Esther (Charlotte Spencer) begins to pull on the heartstrings of the audience and we are conscious of her difficult circumstances as dictated by the day and age. While she continues to show her claws whenever alone with her nemesis, Clara, she also begins to show her vulnerability. While I am guessing she will be “rescued” by Lord Babington (Mark Stanley) by the end of the season, I also am hoping the two characters will find genuine happiness together as even he is starting to come across as less arrogant and irritating.

Unfortunately with all the ladies taking center stage, Esther’s step-brother, Sir Edward (Jack Fox), is fading into the background this episode.

And while Lady D (Anne Reid) has a long way to go before she redeems herself after the pineapple party catastrophe, she managed to continue providing entertainment as this week she verbally duels with Tom Parker and the doctor who has hired to come to Sanditon, Dr. Fuchs (Adrian Scarborough).

Please Do Something With Charlotte’s Hair

Considering that this is supposed to be a period piece set in the Regency era, I would be very grateful if Andrew Davies and the team would please do something with our heroine’s hair. Much like Billie Piper‘s dyed hair being let loose in the recent Mansfield Park and Sally Hawkins directed to run around Bath like a silly ninny in the recent Persuasion, I fear Andrew Davies is trying to modernize Jane Austen’s work while pretending that he is staying true to the time period.

Are We Supposed to Be Cheering for Georgiana?

I am still conflicted as to whether we are supposed to be cheering for Sidney Parker’s ward, Georgiana Lambe (Crystal Clarke), who has so far come across as bratty and rude. I understand that she is in a situation she does not want and yet this is where her father and guardian deem is best for her so she must obey and respect their wishes until she is legal. It is not as if Sidney is asking her to do anything egregious or evil. He is trying to help her find a husband (again – following her father’s wishes) and wants to keep her out of trouble for her own good.

So does she redeem herself this week? [SPOILER] No. There is apparently an illicit lover she’s been forbidden to see and although she has promised Sidney she will be a good girl from now on (after drawing something extremely inappropriate that viewers were not allowed to see), I fear she will only serve to pull Charlotte down with her.

Romance Prediction? Although there is an illicit lover, I would love to see some more between Georgiana and Sidney’s hypochondriac but lovable brother, Arthur (Turlough Convery).

Is Sanditon Worth Watching?

I am still on the fence about whether I would recommend this version of Jane Austen’s Sanditon. While there were no naked men in this episode, it would seem that Andrew Davies is really trying to shock Austen’s fans and the story reads more like a “modern” creation versus a Jane Austen masterpiece.

With young unmarried women running around with their hair wild, a host of unlikeable characters, and our hero (Theo James) getting the short end of the stick, my vote is that Episode 3 is a miss. 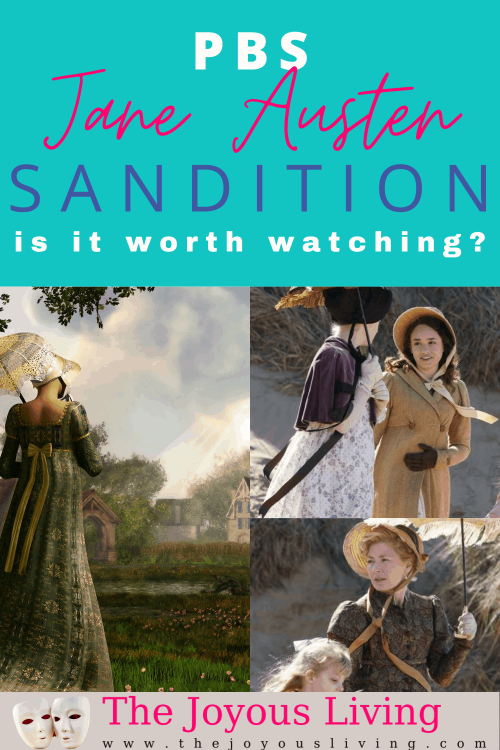