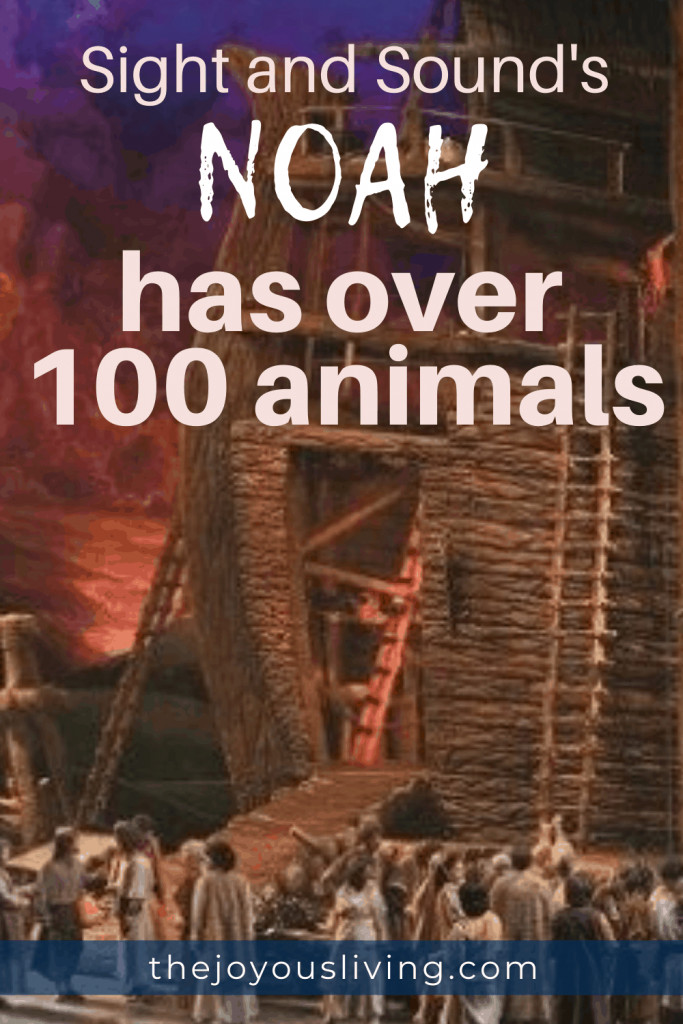 Filmed before a live audience, NOAH captures the panoramic scope, spectacle and grand scale that are signatures of a Sight & Sound musical production. There are over 100 live, animatronic and puppet animals in the show! It was so fun to see the camels and beautiful birds and even the gigantic turtle entering the ark on stage. 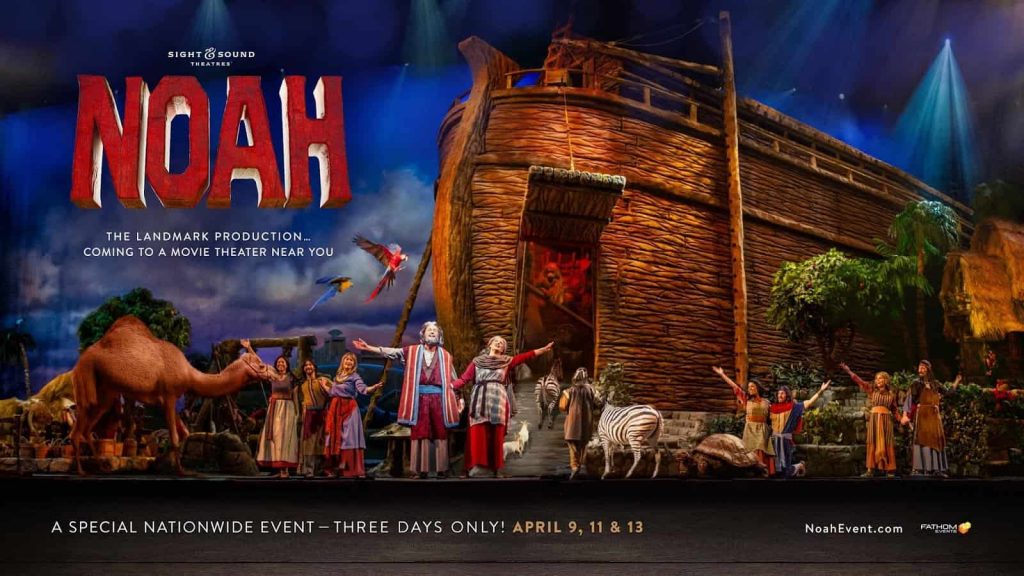 NOAH takes you on history’s best-known voyage as you board the enormous ark—along with two of every kind of animal! Finally, we have a refreshing and Biblical telling of the story of Noah. Unlike the recent Hollywood flop there are no “Watchers” nor does Noah threaten to kill newborns. Gosh, the Bible is dark enough and real enough without those added bits of “drama”.

Here we have Noah and his wife and sons and their wives obeying the seemingly crazy order by God to create an ark in a land where there’s never even been a flood (what’s a flood?)

They are given fictional friends and family who urge them to give up their foolish ways and even come to mock them for their beliefs. The creators of Sight and Sound’s NOAH give them obstacles in achieving their goals including fictional troubles in the marketplace and a fire lit by the non-believers. But finally Noah and his family board the ark with all the animals at the end of Act One.

Act Two picks up immediately where Act One left off and the family suffers with the knowledge that their loved ones must pay for not having believed. Once the journey has begun, we have some fun scenes inside the ark with feedings, arguments over food portions, and get the best song in the form of a soliloquy for Noah who is filled with doubts, uncertainties and ultimately faith. 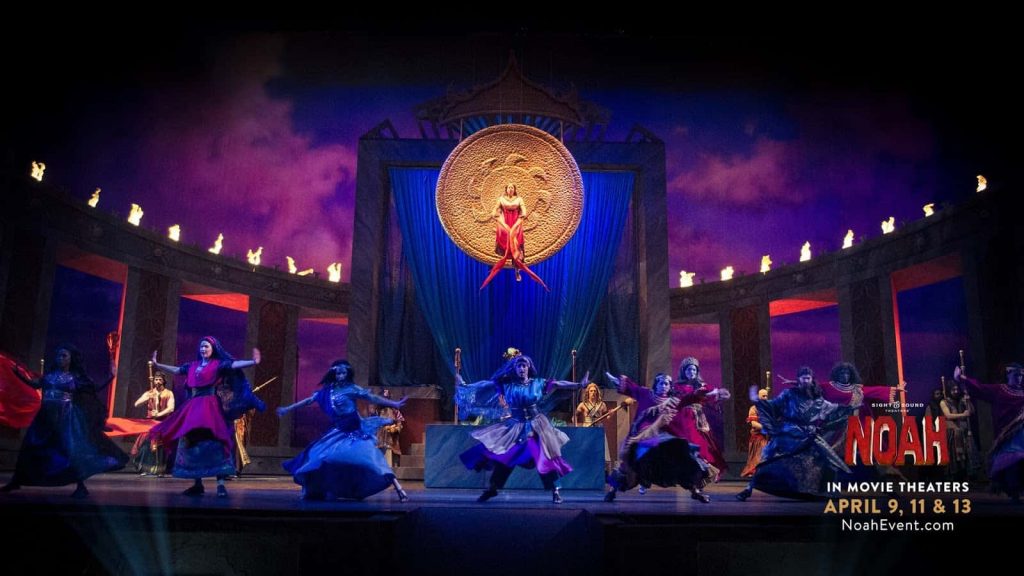 The show is similar to what one would expect from a Sight and Sound production with several short tunes and a couple of memorable numbers including the before mentioned soliloquy and a group number in Act One when the non-believers are introduced.

There are a few cringe-worthy moments when in particular Mrs. Noah raises her hands in praise and sings a short ditty of praise such as you might imagine in a modern-day church setting. That makes me hesitant to take a non-Christian friend to see the film as they can be perceived as “church-y”.

The other reason I hesitate to recommend NOAH are the wigs! Ugh. I really can’t write a review of NOAH without mentioning the horrendous wigs (beards). Two are particularly horrific – Noah’s original beard and mustache (he gets a better one later on) and the beard of the father of one of Noah’s daughters-in-law. They look cheaply made and poorly pasted on. Unfortunately, I think NOAH is a Sight and Sound production that suffers from close-up photography. By being captured on film, the show’s weaknesses are accentuated and made glaringly obvious whereas I assume a silly-looking beard would not be as noticeable live. Nor would the animatronic animals on board the ark look so fake.

All in all, though I love the incredible sets and the second act, in particular, is a treat seeing the family’s struggles and joys while stuck aboard the ark. I can only imagine how grand and awe-inspiring the sets will look on the big screen when Fathom Events brings NOAH to the big screen for three days this week! And if you ignore the poor job done by the wig and beard department and the occasional “church-y” moments, you have to admit that the character development is strong as is the acting.

I would love to give a shout out to key actors but unfortunately, a cast list was impossible to find online as is common with Sight and Sound productions but FYI the actor who played Aaron in Moses and the title character in Jonah is back again as a fictional brother and adversary of Noah’s as is the actress who played Moses’ adopted mother and Jonah’s mother as Mrs. Noah. 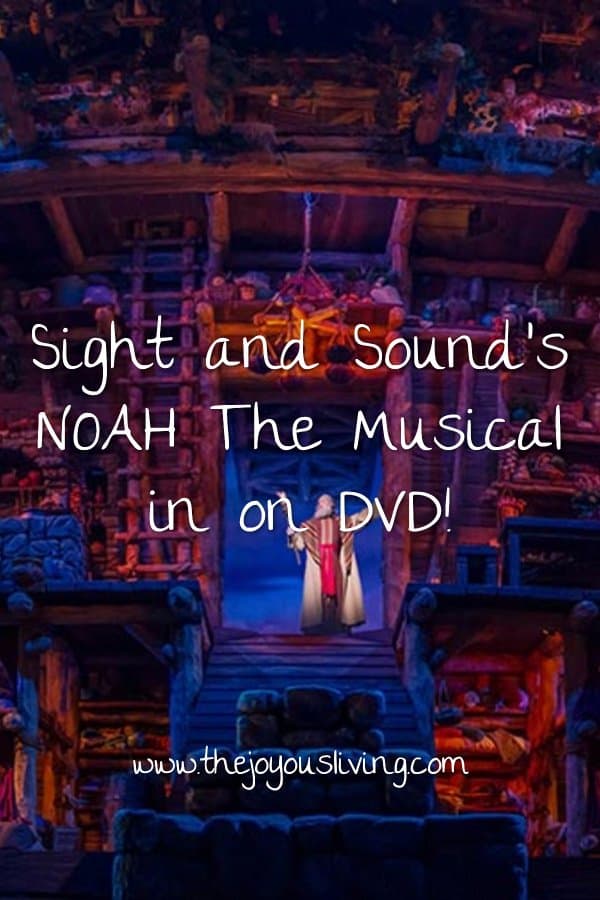