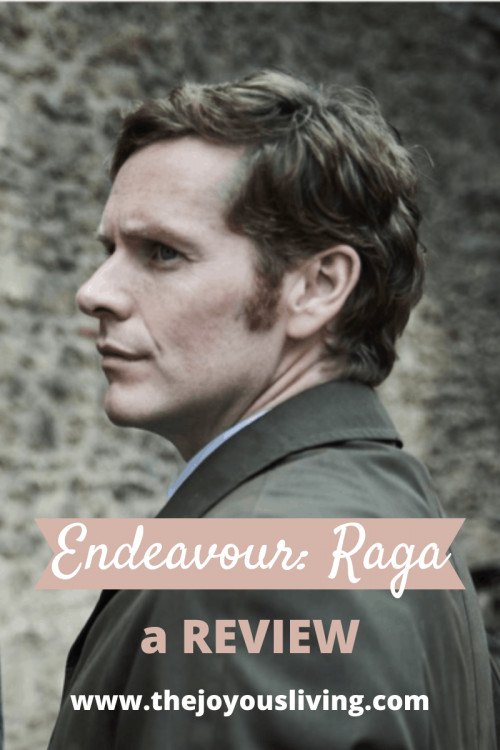 While Endeavour Season 7 began with a thrilling first episode of Oracle, this second episode too is thrilling but seems to get darker and darker. Even the case featuring our medium, Jenny Tate (Holli Dempsey) and the arrested Professor Blish (Angus Wright) have been pushed to the side with neither actor appearing in Raga.

There is a short appearance by Carl Sturgis (Sam Ferriday), the jealous boyfriend of our murdered barmaid from Oracle. While he had a solid airtight alibi for the murder, Thursday is still trailing him on his off time. And Thursday also hears the ominous whistling from Oracle during the night on his walks.

But the episode’s main case concerns race issues in 1970 between a group of British caucasian racists and a multi-generational Pakistani family who own and work at The Jolly Rajah, an Indian restaurant in Oxford.

A political nominee (Jason Merells) has been stirring up hatred and anger with his race talk and one Pakistani man has been murdered by one of his young followers (played by Roger Allam’s own son, William Allam) whose mother is played by real-life mother and wife of Roger Allam, Rebecca Saire, who previously appeared in the 2018 episode, “Colours”.

The second murdered Pakistani man, a Mr. Aziz (Raj Awasti), is murdered on his delivery rounds for The Jolly Rajah in a flat belonging to food critic, Oberon Prince (Neil Roberts). The fact that Mr. Prince was a food critic gives cause for one of the funniest scenes in the episode:

“He orders an Indian meal then butchers the man who delivers it. What is he? A lunatic of some sort?” Bright

“Taking an axe to someone’s head goes beyond expressing dissatisfaction with the service, don’t you say?” Bright

And while we’re on the topic of food, is not anymore curious what Sgt. Strange was trying to cook and who he was making dinner for?

But back to the case – the missing food critic or the racist politician – whose daughter (Emma Cunniffe) is living in Apartment #8 of the same building where Mr. Prince is the resident of #10 – seem to be obvious suspects.

Mr. Aziz’ co-workers at the Indian restaurant are owner Uqbah Sardar (Madhav Sharma), his sons, Dr. Farook Sardar (Sia Allpour), who is romantically involved with the lady in #8, and Salim (Shane Zaza) who is married to the gorgeous Nuha (Hiftu Quasem), and Uqbah’s brother, Rafiq (Pal Aron), who is in charge of the kitchen.

Considering the political climate, the case has to be well received. However, I was hoping that the bad guys and good guys would not be so stereotypical. The murderer does turn out to be a surprise but an illogical one at best.

The second episode of Endeavour Season 7 – Raga – picks up after the dramatic final scene of Oracle where Ludo introduces Morse to his wife, the mysterious Violetta from Venice. Ah yes, did we see that coming? Part of me did and I wager you did too.

There is something Tom Ripley about our charming Italian gentleman friend of Morse – extremely likable and yet very dangerous too.

“Perhaps what both [Violetta] and Ludo represent is something [Morse]’s been thirsting for since he left Oxford University – that kind of intellectual rigour.”

But what could this couple have in store for our favorite DS Morse? Nothing good, that’s for sure. Especially when Violetta tries to seduce Morse even after he’s discovered she’s married to a man he calls friend.

“A goodbye might have been polite but nobody died. You don’t owe me anything.” Morse

“Can I see you?” Violetta

“I don’t think so. He’s a friend. Affairs with married women, I’m sorry. It’s just not my scene.”

The relationship between Morse and DCI Thursday (Roger Allam) is continuing to deteriorate which is heartbreaking. In one painful scene, Morse oversteps the bounds of his position with Thursday, and although he apologies, the tension that we saw in Oracle seems to only get worse.

Yet once again Shaun Evans is right when he says,

“It’s interesting because in the later books and the Inspector Morse TV series, Thursday is never mentioned, so we need to give a reason for that. Something begins to happen which is irreconcilable, and we’re seeing the beginnings of that now as this series goes on. I think familiarity breeds contempt. I think both of these guys have been in each other’s pockets for many years now and they’re just getting on each other’s nerves. In their way of doing things, they can’t see the wood for the trees with the other and are starting to fail to see the positives.”

Roger Allam puts it this way,

“Thursday tends to represent gut instinct whilst Morse represents intellect, and though it’s not as if Morse has no gut instinct and feeling and Thursday has no intellect, that’s how they pursue this particular case. Their disagreement over it opens a big split between them which gets wider and wider throughout the series.”

While we know there shall be a Season 8, the question remains – will Morse and Thursday be working together in this upcoming season?

Thankfully, the Endeavour Raga episode does see some positivity because Win and Fred seem to be closer to reconciliation.

When Fred is playing with his birds, Win says,

“I’m here you know, if you want to talk about anything. Whatever it is, you’ll put it right. It’s what you do.”

And your heart just sighs in relief knowing that even if things between Morse and Thursday don’t work out, things will get better between the Thursdays.

When Ludo visits Morse at his home, he says,

“A man needs to keep his friendships in good repair.”

“If a man does not make new acquaintances as he advances through life, he will soon find himself left alone. A man, sir, should keep his friendship in a constant repair.”

What Does Raga Refer to?

In Indian music, RAGA is a pattern of notes having characteristic intervals, rhythms, and embellishments, used as a basis for improvisation.

Where to Watch Endeavour Raga 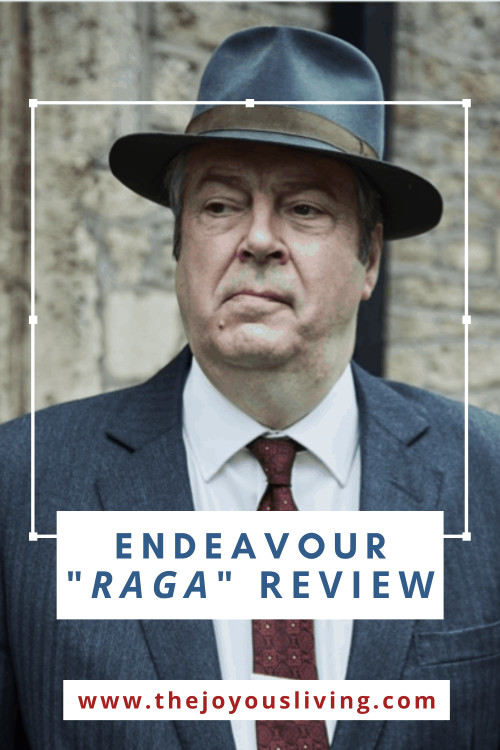