DIANA THE MUSICAL – with the original Broadway cast – was filmed professionally for Netflix in September 2020 at the Longacre Theatre, without an audience. 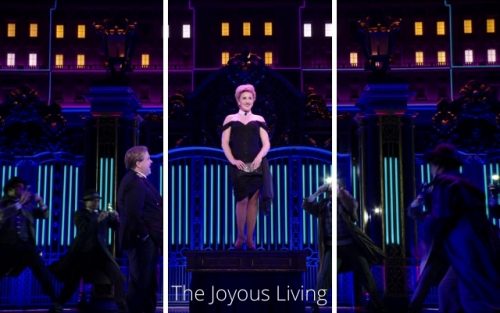 Fans of Broadway, the late Princess Diana, and the Royal Family will be excited to see the musical on Netflix starting October 1, 2021. The dazzling and devastating life of the late Princess Diana takes center stage in this original musical, filmed in advance of its official Broadway opening on November 17, 2021.

Buy your tickets to DIANA THE MUSICAL at Telecharge.

DIANA The Musical features 26 original songs by Bon Jovi‘s David Bryan and Joe DiPietro (Memphis). It is an interestingly sympathetic take on the story of the late Princess Diana (Jeanna de Waal) and her tragic marriage to Prince Charles (Roe Hartrampf). There is no actual antagonist in this musical except the paparazzi (Snap, Click). To watch Diana’s story fade to black with a dizzying and blinding attack of flashbulbs is the best bit of theatrical drama that would appear melodramatic to a film and tv audience but works well on Broadway.

Everyone from HRM Queen Elizabeth II (Judy Kaye) to Camilla Parker Bowles (Erin Davie) is given a sympathetic chance to show they are just as human as the rest of us. Perhaps they are more famous and fodder for the tabloids and characters in Netflix’s The Crown but they are also just men and women who loved hard, saw their fantasies die, and had their hearts broken.

While many of the show’s ensemble numbers propel the story along (and are not likely to be played on the radio) and remind this reviewer of music from the 1970s and 1980s (especially Andrew Lloyd Webber’s EVITA with songs like “The Words Came Pouring Out” sounding a lot like “And The Money Kept Rolling In (And Out)”), there are some great quieter songs that pack a punch.

A trio of songs at the end of Act One (Diana, As I Love You, & I Miss You Most on Sundays) give our three leads (Jeanna de Waal, Roe Hartrampf, & Erin Davie) a great chance to showcase not only their talents but also their character’s hearts and pain. Queen Elizabeth II also gets a beautiful Act Two number (An Officer’s Wife) that showcases her own vulnerabilities.

The show’s best company number is “The Main Event” featuring a cat fight between Camilla and Princess Diana. 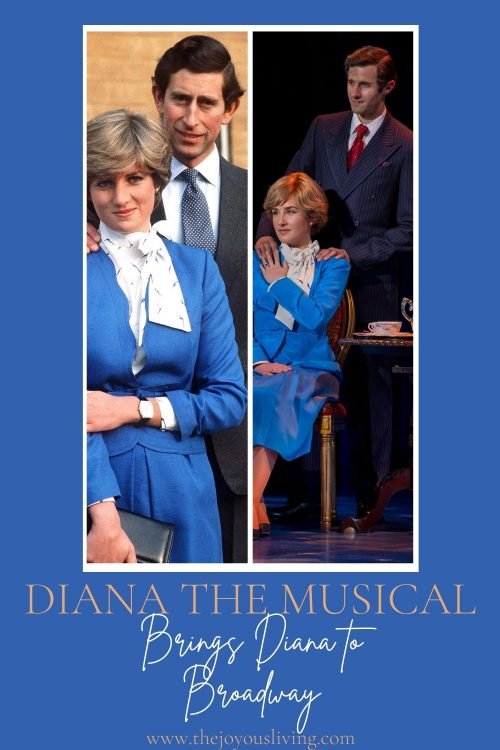 The acting is also top notch especially from Erin Davie as Camilla Parker Bowles who may not be the titular character but she definitely walks away with this reviewer’s heart.

Also worth noting is the great comedic timing from Tony Award Winner Judy Kaye who doubles in the roles of Queen Elizabeth II and romantic author Barbara Cartland.

And kuddos to Bethany Tesarck (wearing a blonde wig) who is a standout in the ensemble.

Director Christopher Ashley (Come From Away, Memphis) does a great job capturing the show from different angles and surprises the audience with some terrific costume changes for Jeanna de Waal.

William Ivey Long does an impressive job replicating many of Princess Diana’s famous dresses. Strangely though they decided to have Prince Charles wear the entirely wrong ensemble for the engagement from tie color to suit color/style. [see pin for a comparison of the two outfits.]

The other oddity that stands out is the way Diana’s relationship with James Hewitt (Gareth Keegan) ends. I am not a Diana historian but I do know that James Hewitt considered suicide after the affair ended.

Oddities aside, fans of Netflix’s The Crown and Broadway musicals will really enjoy DIANA THE MUSICAL debuting on Netflix October 1, 2021, starring Jeanna de Waal in the titular role.

Parental Warning – One song involves over 20 uses of the F word and there are several taking of the Lord’s name in vain and uses of d@mn and sh!t.

Cast and Crew of DIANA THE MUSICAL 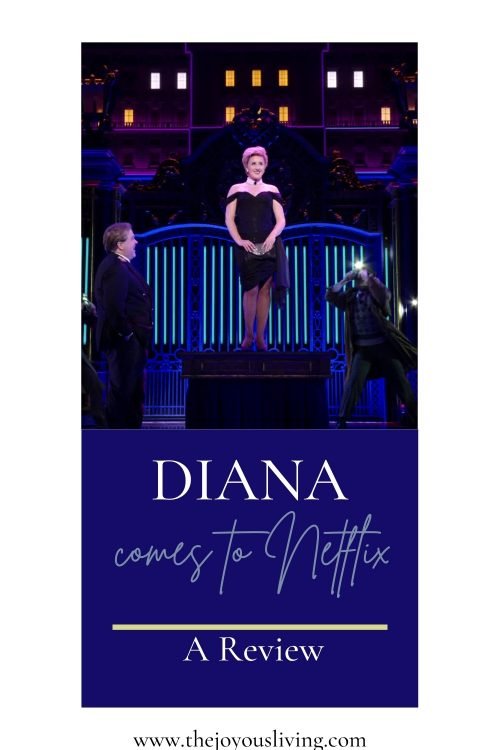