These four Christian historical romance authors need to be added to your reading list for a cozy night in.

Much like a good British Drama or Period Drama you watch on television that has your heart palpitating, similarly a well-written romance novel will bring you to the brink of tears due to joy and/or distress.

“The awakening of the heart is one of the most wonderful, frightening, joyous experiences in human life.”

Michael Phillips and Judith Pella, The Crown and the Crucible (The Russians)

Michael Phillips and Judith Pella wrote a compelling series in the 1990s about Pre-Revolutionary Russia. The story focuses on two families – aristocratic and peasant. A young woman, Anna Yevnova Burenin, comes in from the countryside to find employment in the household of Prince Viktor Fedorcenko. Originally she works in the kitchens but providence brings her into the path of Princess Katrina and she is promoted to a lady’s maid for the young and spoiled princess.

The series focuses on the two young women as they grow up in Pre-Revolutionary Russia. Anyone interested in Russian history, Tsarist Russia, royal courts, the turmoil of war (eg. Crimean War), and ‘prince and the pauper’ storylines will enjoy this seven book series.

Famous historical figures such as Rasputin play supporting roles to the fictional leads.

Violence Level: Moderate; storyline has a focus on warfare but there is no gory violent descriptions.

Christian-ese Level: Heavy; Anna and other characters are strong Christians and not ashamed of their faith. There is a conversion story and regular talk about reliance on faith.

The prayer of faith that your heart is urging you toward must come from somewhere deeper than mere words you read from a page. Faith, as I said, is a matter of the heart, not of the brain.

Michael Phillips and Judith Pella, The Crown and the Crucible

In the early 1990s, Lori Wick wrote The Kensington Chronicles set in Victorian England. The first of the series, The Hawk and the Jewel, brings together Brandon, a Duke of the realm, and Lady Sunny Gallagher, a young English woman who was raised in the palace of Darhabar.

From the beginning you always know that Brandon and Sunny will get together. Considering how Sunny knew absolutely no one in England when she first arrives as a young teenage girl but the captain of the ship who brought her from Darhabar, it is fun to watch Sunny grow up and in turn to see their relationship grow from friends to husband and wife.

Romance Level: Mild; Kissing and the mention of breasts by a teenage girl discovering her body

Violence Level: Mild; there are a couple scary moments for the heroine but there is nothing alarming in the writing.

Christian-ese Level: Heavy; The characters in England are all Christians and Sunny’s conversion is a major storyline in the first book. Conversion stories also play a big part in the rest of the series.

‘None of this is a surprise to You, Lord’, he prayed silently, ‘so please help me to trust You in this.’

Lori Wick, The Hawk and the Jewel (Kensington Chronicles)

Tracie Peterson has been writing Christian historical romances for years. Series have focused on everything from Alaska to the industrial revolution. My favorite couple of series she has written are about the Harvey Girls. Remember the Judy Garland movie? These books go into even more detail about the history of the Harvey Girls and the backgrounds of the women who signed up

In Desert Roses, Tracie Peterson shares the story of three Harvey Girls – Alex (who doesn’t trust men), Ashley (a widow with a young boy), and Rainy (trying to escape from her past). In Westward Chronicles, there are three more girls – Simone (on the run from her father), Rachel (who’s left behind the man she loved), and Jillian (a novice who’s pretending to be her twin sister).

Personally, my favorite stories are – Simone, Ashley and Jillian.

Violence Level: Mild; there are a couple scary moments for the heroines but there is nothing alarming in the writing.

Christian-ese Level: Heavy; most of the characters are Christians and storylines involve conversions.

Self-control is an important part of living a Christian life.

Tracie Peterson, Shadows of the Canyon

Gilbert Morris is best known as the author of the House of Winslow series about an American family.

The story begins in 1620 with Gilbert Winslow, who is given the mission of infiltrating religious separatists, on behalf of the King.

The series ends with book #40, The White Knight, by telling the story of  Luke Winslow, a fighter pilot, in 1942 Spain.

In real life, there was a Gilbert Winslow who at the age of 20 boarded the Mayflower with his brother Edward.

Some women might think there is too much history and action and not enough romance but I find that Gilbert Morris does a good job of balancing the three.

Violence Level: Mild; there are a few scary moments (including battle scenes) but nothing alarming in the writing.

Christian-ese Level: Heavy; most of the characters are Christians and storylines involve conversions.

It is my Christian duty to take pity on those who are in pain. 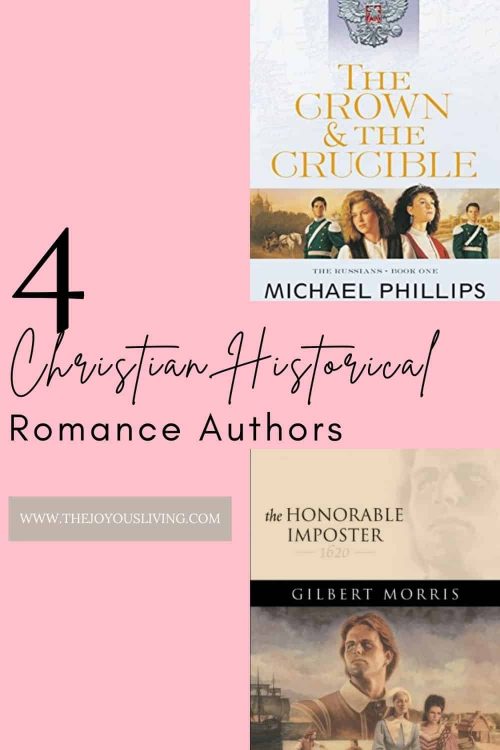 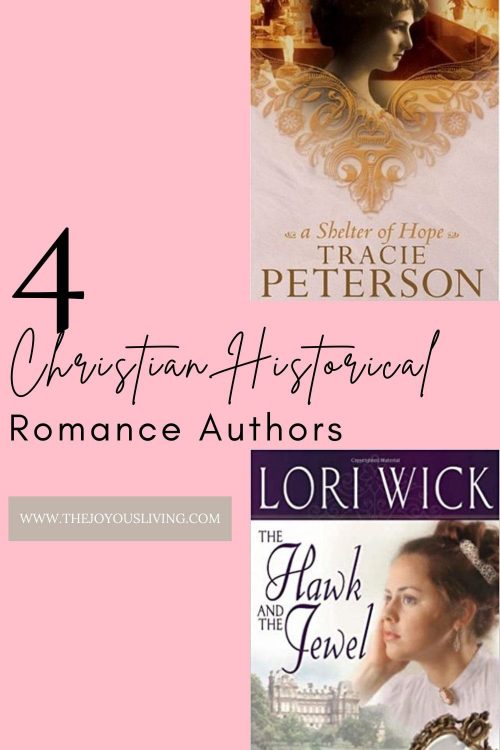 4 Comments on 4 of the Best Christian Historical Romance Authors