Wow. I am still in awe of the amazing production of Bright Star, the 2014 musical by Steve Martin and Edie Brickell, that has opened in Los Angeles at the Ahmanson Theatre this past weekend.

This was, unfortunately, a short-lived musical on Broadway despite winning the 2016 Outer Critics Circle Awards for Best Musical and Best Score and the Drama Desk Award for Outstanding Music. However, perhaps it is a show that will be best appreciated on the road where audiences are not having to necessarily choose between it and big flashy blockbuster shows such as Hamilton and Wicked.

The Beauty of BRIGHT STAR

Yes, the show only has a 10 member bluegrass band, boasts no extravagant dance numbers and revolves around the “cliche” transforming power of love and redemption. But those three things are actually some of the best elements of the production.

The band is housed in set designer’s Eugene Lee‘s brilliant see-through wooden cabin on wheels that also serves as one of the most prominent set pieces. They bring great energy and fill the theatre with their beautiful bluegrass music that had the opening night audience tapping their toes endlessly and at some times you could see a great majority of the audience clapping along. The infectious music by Steve Martin I have no doubt was worthy of his two awards in 2016.

There are two large dance numbers choreographed by Josh Rhodes that are equal parts entertaining and equal parts memorable. But I would suggest that it is actually the smaller ensemble pieces that serve to provide the most beautiful and breathtaking moments while providing great fluidity to the musical. And what a gorgeous troupe of dancers!

Some reviewers might suggest that this is a musical too wrapped up in cliches and predictable conclusions. Yes, to some degree I would agree that Martin’s book is riddled with triteness and that the majority of Brickell’s lyrics would leave you singing along days later. I argue however that the show’s power and beauty come from leading lady Carmen Cusack’s versatile performance as Alice and the show’s refreshing homage to classical Broadway when morals were either black and white.

Some might suggest the Act One finale is melodramatic and over the top. In shock for the entire intermission, I wondered about it myself and without giving anything away I would argue that it is likely meant to be shocking and thought-provoking. Maybe we like to limit our views on evil to extreme terrorists but each of us commits evil in our lives on a different scale and Steve Martin’s book is not afraid of getting dirty bringing up atrocities we commit and the effect that those actions have on our lives. The most gorgeous moment of the musical is one you would probably not see coming.

Again without going into too much detail, I am referring to the Act Two scene between father (Stephen Lee Anderson) and daughter (Carmen Cusack) when even though Daddy Murphy is unable to forgive himself for his past actions Alice is able to quietly reach out and offer her own forgiveness. Pow! 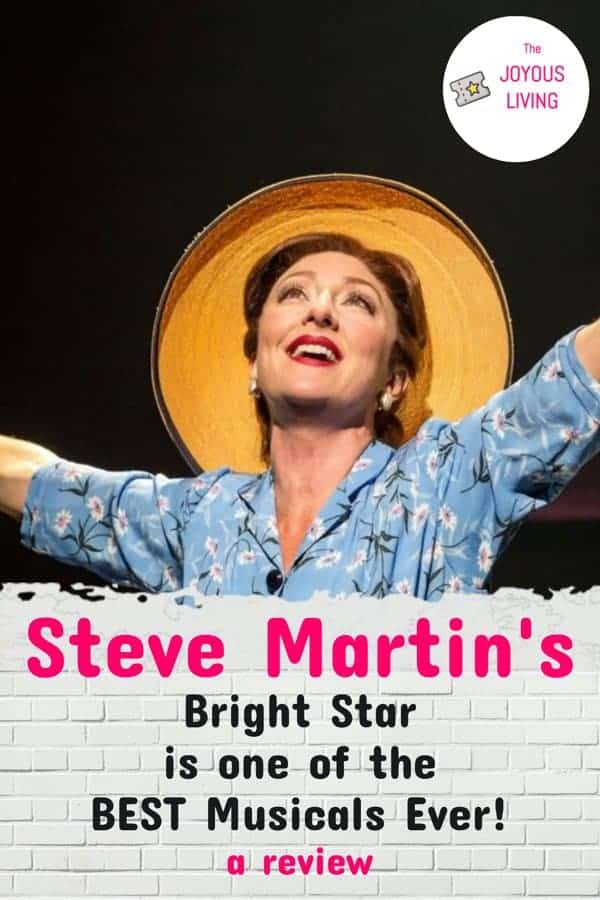 So… If you are a fan of bluegrass music, love Steve Martin’s effortless humor, and want a musical with both heart and conscience then you need to get your tickets fast to see the U.S. Tour of Bright Star!! And please do yourself a favor and do NOT read show spoilers nor listen to the spoiler riddled soundtrack until after you’ve had a chance to experience the show yourself first.

Disclaimer: My ticket was generously comped by CTGLA but the opinions are all my own.