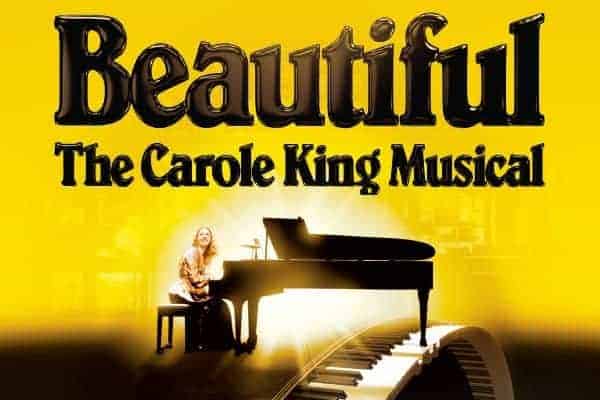 BEAUTIFUL is coming to Thousand Oaks!

BEAUTIFUL – The Carole King Musical tells the inspiring true story of King’s remarkable rise to stardom, from being part of a hit songwriting team with her husband Gerry Goffin, to her relationship with fellow writers and best friends Cynthia Weil and Barry Mann, to becoming one of the most successful solo acts in popular music history. Along the way, she made more than BEAUTIFUL music, she wrote the soundtrack to a generation.
BEAUTIFUL features a stunning array of beloved songs, including “I Feel the Earth Move,” “One Fine Day,” “(You Make Me Feel Like) A Natural Woman,” “You’ve Got a Friend” and the title song.

From Andy Blankenbuehler, winner of the 2017 Tony Award® for Best Choreography and the 2016 Tony Award® for HAMILTON, comes BANDSTAND—the new musical that explodes with the most high-octane, heart-stopping and best dancing on stage today.

AN AMERICAN IN PARIS

In post war Paris, romance is in the air and youthful optimism reigns. Gershwin’s soaring melodies are matched by gravity-defying dance as the world rediscovers the power of love in this breathtaking production. Hoping to start a new life, World War II veteran Jerry Mulligan chooses newly-liberated Paris as the place to make a name for himself as a painter. But Jerry’s life becomes complicated when he meets Lise, a young Parisian shop girl with her own secret – and realizes he is not her only suitor.
Winner of four Tony Awards® and inspired by the Academy® Award-winning film, this exquisite production features your favorite Gershwin songs including “I Got Rhythm,” “Liza,” “’S Wonderful,” “But Not for Me,” and “Stairway to Paradise.”

Season tickets start at $145 for all four shows. Only Season Members receive the best seats at locked-in prices before tickets go on sale to the public, as well as priority access to tickets, premium seating, easy exchanges, lost ticket insurance, Swap A Show privileges and dining discounts.
New season members should order early for the best seats to all four Broadway hits by going to BroadwayInThousandOaks.com, by calling 805.449.2775 or visiting the Thousand Oaks Civic Arts Plaza box office, 2100 E Thousand Oaks Blvd, Tuesday through Sunday 12 p.m. to 5 p.m.

BroadwayInThousandOaks.com, Ticketmaster.com and the Thousand Oaks Civic Arts Plaza box office are the only official sources for tickets. If you purchase tickets through another source, you may pay inflated prices and your tickets will not be guaranteed.