Day #2! I am so excited to be bringing awareness to two of April’s national commencement topics – Sexual Assault Awareness & Child Abuse Prevention.
Today I bring you a short story I wrote in 2006 entitled, Breaking Dishes. I hope you enjoy it and remember that all abuse/assault victims need an outlet to vent and find restoration before they can be conquerors and survivors. Let’s enable our loved ones to find their voice.

“Just throw them down as hard as you can!”

Margie Jemmison handed me a china plate and watched as I tentatively threw the plate on the basement floor.
“No, really throw them this time, Ashley,” she implored. “Put all your anger into those plates and just release it.”

Envisioning Stephen’s face I grabbed the next plate from her hands and smashed it as hard as I could.

Again I grabbed a plate and this time I closed my eyes and replayed in my head Stephen’s empty promises and the way it felt to have his hands groping and tearing at my clothes.

Climbing out of my beat-up Toyota Corolla I slipped off my snow boots and dug through the shoe box for my pink bunny slippers. Coming up shorthanded, I unlocked the door and trudged into the kitchen where I expected to see Margie baking her famous chocolate chip cookies in preparation for her parent meeting later that evening.

Looking around the counter top for a note of some kind, I reopened the garage door to confirm I had parked next to her own Toyota.

“Strange,” I muttered to myself. Flipping off the overhead light and locking the door behind me, I took the stairs two at a time anticipating a warm shower accompanied by some Frank Sinatra. Again, I checked the bedroom for any hints that Margie might have left as to her whereabouts. Nothing. With a shrug, I started to strip down and turned on the CD player while the water began to warm up.

Margie must have returned while I was in the shower because once I had finished toweling my hair and fastened my terrycloth robe’s belt securely, I noticed her sitting on the edge of the bed.

“I’m afraid I should be the one to ask you that, Ashley.” Examining my roommate’s concerned face, I immediately felt a chill of self-consciousness as if a glass of freezing water was being poured down my back. Ever since we had moved in together during the winter things had been somewhat awkward.

I just knew it was coming – the conversation from hell. Why now?

“You’ve been repressing this pent-up anger for so long that you have not even allowed me to come within five feet-.”

Tears began to flow in Margie’s eyes as she looked at me so lovingly that my feet were incapable of running for the door and away from the suffocation that I couldn’t explain away. 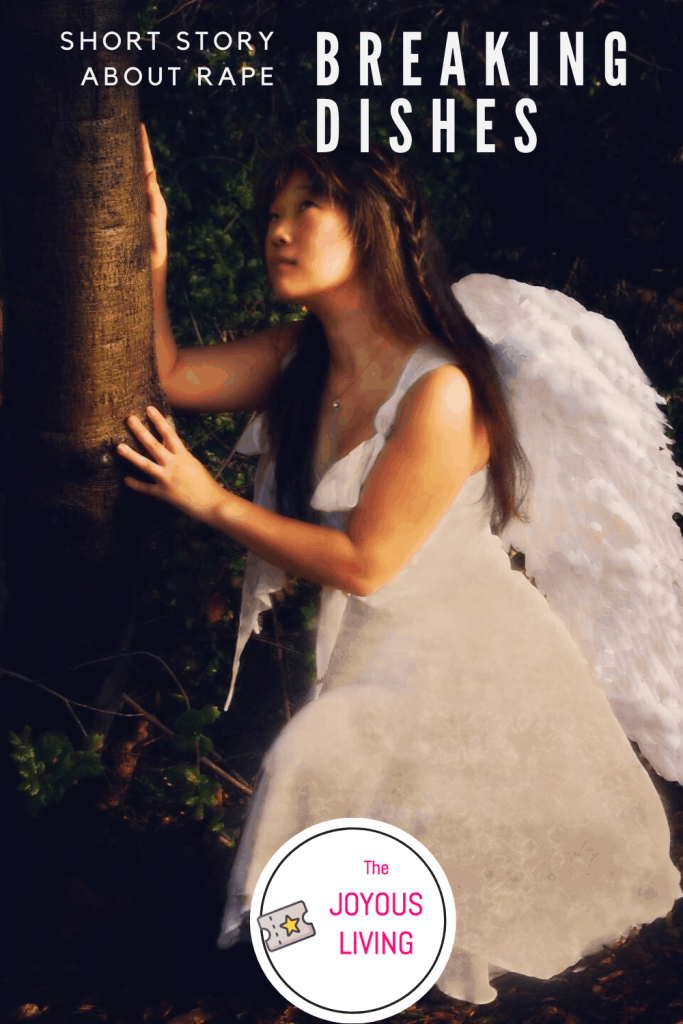 #
I hope you enjoyed my short story and that it has either given you strength and/or empowered you to give someone else the strength they need to release and conquer.

9 Comments on A to Z Challenge: Breaking Dishes, A Short Story about Rape