My 2019 #AtoZChallenge continues with the letter “R“. I’m excited to share 3 of my favorite musicals that coincidentally happen to be in foreign languages (German, French).

Perhaps you heard of the infamous Rebecca that never made it onto Broadway but long before that melodrama of a tragedy there was the gorgeous Rebecca (German language musical) that I first found on YouTube before buying any copy I could find on Amazon.

Written by the same team that brought us Elisabeth and Mozart!, Rebecca is a close adaptation of Daphne du Maurier’s book of the same name. It is easily one of my all time favourite novels/movies/musicals. The story revolves around Ich (“I”) a poor and naive companion to Mrs. Van Hopper in Monte Carlo where they meet the rich and mysterious Maxim de Winter. The couple marries and moves to his estate, Manderley, in England but they cannot escape the shadow of Rebecca, the first Mrs. De Winter.

Some favourite performers (based on recordings and Youtube videos):

I first heard Lisa Antoni (Ich) thanks to the recording of Rudolf Affair Mayerling (by Frank Wildhorn) where she played Mary Vetsera opposite Drew Sarich (Rudolf). 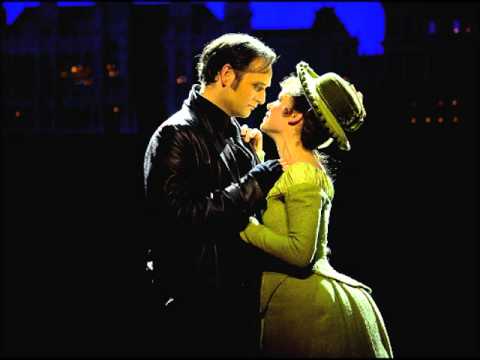 For those who don’t know the story, Rudolf was the Crown Prince of Austria son of Elisabeth (see E for Elisabeth, the musical) and some believe his suicide was one of the dominoes that led to the fall of the Austrian Empire just prior to World War One. His death lead to his father Emperor Franz Joseph naming his younger brother Archduke Karl Ludwig as heir and successor. However Ludwig died meaning his son Archduke Franz Ferdinand was heir presumptive but in 1914 he was assassinated. Emperor Franz Joseph died in 1916 and his great nephew Karl was named emperor. As part of his Fourteen Points, U.S. President Woodrow Wilson demanded that the Empire allow for autonomy and self-determination of its peoples. As a result Emperor Karl went into exile in 1918 and a republic came into being without revolution.

This is probably one of Frank Wildhorn’s best musicals. In fact it’s interesting that his musicals fair much better in Europe then here in the States. Hmm.. 🙂

Aside from the horrible dresses that Lisa has to wear, this is a must see for anyone who enjoys German language musicals, historical dramas and a good romanticized story. Rudolf and Mary’s love story according to historians is not quite such a fairy tale as Wildhorn’s story would have you believe but it makes for a great musical. He had in fact tried to make a suicide pact already with his other mistress but she backed out. Also of interest is how Mary’s body was smuggled out of Mayerling by her uncles.

Uwe Kröger and Wietske van Tongeren from the original cast of Rebecca are featured in Rudolf as Taaffe and Princess Stephanie respectively. 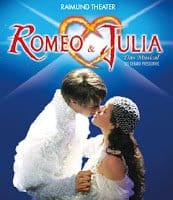 Finally, I have to mention my all time favourite French language musical Romeo et Juliette by Gérard Presgurvic. Since we are talking about German musicals, I will focus on the German production Romeo und Julia starring Lukas Perman as Romeo and Marjan Shaki as Juliet. Some familiar names were featured in the production including Mark Seibert (Tybalt) – also seen in Mozart! and Elisabeth and Carin Filipcic (Nurse) – also seen in Rudolf and Mozart!. Thankfully the album can be found on Amazon streaming and is also available to purchase in the CD format.