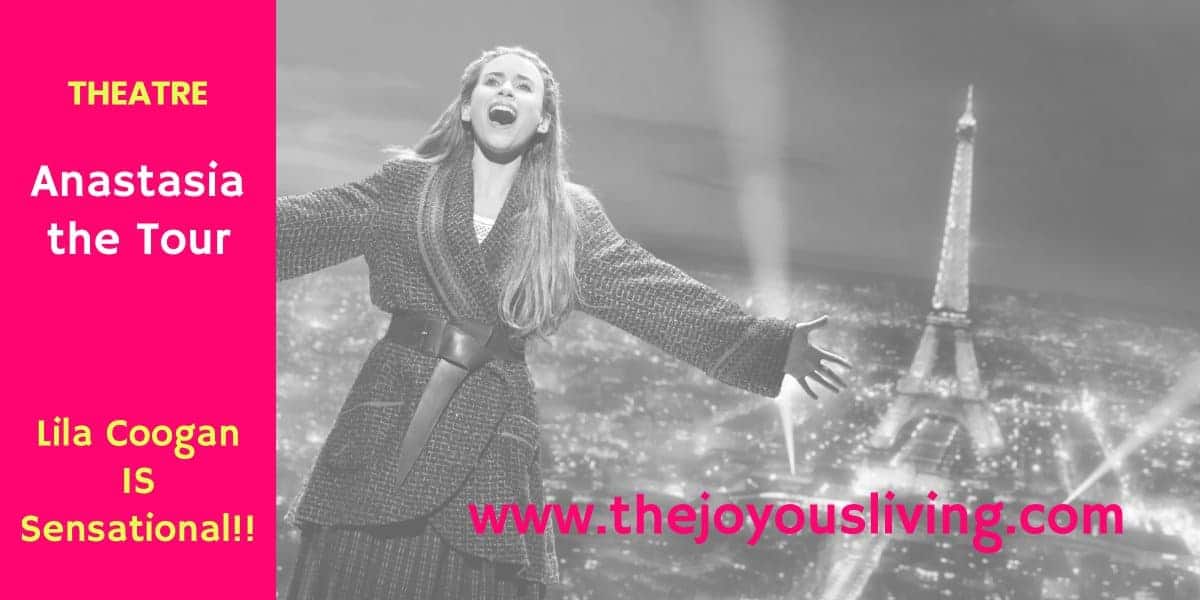 Anastasia the Musical has arrived in Hollywood at The Pantages Theatre (before visiting Tempe, Arizona, and Segerstrom Center for the Arts in Costa Mesa in November) for a too-brief stay to a standing ovation. Due to how much I loved the show, I don’t think my smile left my face the entire drive home. So where to even begin in my praise of the show?

For those of you who aren’t familiar with the show (like me!), it is based on the 1997 animated movie that starred Meg Ryan and John Cusack about a young amnesiac Anya (Lila Coogan) who hopes to find her identity and family by teaming up with a pair of con artists (Edward Staudenmayer, Jake Levy) who want to earn a sizable reward for reuniting The Dowager Empress (Joy Franz) with The Grand Duchess Anastasia Romanov in Paris years after the Imperial family was murdered.

Changes from Film to Broadway:

While the musical retains the basic storyline and original numbers such as “Once Upon a December” and “Journey to the Past”, it also makes some very big changes. For one instance, the antagonist of the cartoon, Rasputin (Christopher Lloyd), is gone and replaced by a much more likable and sympathetic Gleb, a Bulshevick general (Jason Michael Evans). Also, there are no cute animals running around – the dog and bat have vanished and not terribly missed, to be honest. The Bernadette Peters character of Sophie is gone and replaced by a more 3-dimensional lady in waiting, Countess Lily (Tari Kelly).

Also, some musical numbers have had a few lyrical changes, been given to different characters to sing and rearranged to be sung at different parts of the story (for example Anya’s “Journey to the Past” is no longer her intro song but rather the big end to the first act).

For those of us unfamiliar with the theatrical musical that played 808 regular performances on Broadway, the show is chalk filled with new numbers that help move the story and develop characters. The opening night audience’s favorite was undoubtedly “The Countess and the Common Man” featuring the second act stand out Tari Kelly as Countess Lily and Edward Staudenmayer as her lover Vlad. We as an audience couldn’t laugh any harder.

Other standouts were Lila Coogan‘s first number, “In My Dreams”, that had the audience mesmerized and the stunning opening sequence “The Last Dance of the Romanovs” with some of the most beautiful crescendos filling the theatre (reminded me of The Light in the Piazza). Jason Michael Evans‘ new character of Gleb as I mentioned above was sympathetic compared to the pure evil Rasputin in the cartoon movie and his number “Meant to Be” was chilling.

Lila Coogan and The Cast

My friend E who came with me to see the show last night happened to have seen the original Broadway cast and said Lila Coogan‘s performance was tops. Ms. Coogan was spunky, feisty and full of life. You could believe this was a woman who did anything necessary to cross Russia on foot. And her voice is AWWW-Mazing! I can’t honestly imagine a better performance.

She was supported by a fabulous A++ cast from the adorable Little Anastasia/Alexei Romanov (played on opening night by Delilah Rose Pellow) to the gorgeous Alison Ewing (Odette in Swan Lake) to the hilarious trio of actresses (Taylor Quick, Kylie Victoria Edwards and Kourtney Keitt) to the impressive Jake Levy who played her romantic interest Dimitry. Everyone was in fine form and excellent voice on Opening Night at The Pantages in Hollywood.

While Jason Michael Evans is no Ramin Karimloo (Original Broadway Cast – recording) he was the biggest surprise of the night with his sympathetic portrayal of antagonist Gleb. There were several moments when I really wondered why he wasn’t Anya’s love interest.

The crowd favorites had to be the comical Edward Staudenmayer (Vlad) and Tari Kelly (Countess Lily) who were a match made in comedic heaven.

Linda Cho‘s gorgeous costume design deserves a mention. The women especially were lucky enough to wear some of the most beautiful costumes in Imperia Russia scenes, as peasants in Communist Russia, as glamorous 1927 Parisians. It’s no wonder her costume design was nominated for a Tony Award in 2017.

And how could I forget David Chase‘s dance arrangements!? From the gorgeous waltzes to the Swan Lake sequence that perfectly paralleled the main stage action to the entertaining second act dances that let the entire cast let loose, Mr. Chase’s choreography was thoroughly entertaining.

I honestly cannot recall a time I was more enraptured by a musical. As a fan of the 1997 movie and the earlier romanticized movies about Anastasia Romanov and Anna Anderson (1986 – Featuring a young Christian Bale as Alexei +  1956 – Yul Brynner, Ingrid Bergman), I knew I would love it. What I was not expecting was just how much I loved the show. Every single actor on the stage at The Pantages deserved to be on the Broadway stage and to have their performance captured for posterity on a cast album – they were just that amazing!

The design time was a combined force to be reckoned with and teaming that with the beautiful live orchestra conducted by Lawrence Goldberg you have a night to remember at The Pantages Theatre. And kudos to the beautiful orchestra who did not once overpower the actors’ voices and treated us to a lush and full sound.

I don’t know how many more adjectives I could use to describe the show – lush, magnificent, mesmerizing, sensational, perfection, romantic, charming, memorable, phenomenal. Get the picture? You do NOT want to miss this show! Please do yourself a favor and get your tickets NOW!!!

Tickets: Online + Box Office, Starting at $49 (at The Pantages)

Show Lottery: Limited number of digital lottery winners will receive 2 tickets for $25 each!

Is Anastasia Kid-Friendly? 8+, due to thematic material and mild adult humor (that would go over the head of most children). The show utilizes theatrical haze, strobe lights, gunshot sound effects, and smoking (vapor e-cigarettes).

Disclaimer: My tickets were comped for review purposes but all opinions are my own!

13 thoughts on “Anastasia the Musical is Sensational at The Pantages Theatre!”