With the anniversary of September 11th coming up, I wanted to bring together a list of 9/11 movies and t.v. shows that honor the memory of the victims. Let’s Roll.

This HULU original miniseries The Looming Tower is based on the non-fiction book by Lawrence Wright. The Pulitzer Prize-winning book explains in unprecedented detail the growth of Islamic fundamentalism, the rise of al-Qaeda, and the intelligence failures that culminated in the attacks on the World Trade Center.

The miniseries turns the focus from the 9/11 terrorists (as portrayed in the book) to the conflict between the FBI and CIA (as portrayed by Jeff Daniels and Peter Sarsgaard) with the terrorists becoming a subplot.

Bikowsky is one of the most controversial members of the CIA for her involvement in the Bin Laden Issue Station and the Global Jihad unit. According to The Senate Intelligence Committee Report on CIA Torture, Bikowksy is one of the torture program’s chief apologists and the media called her “The Unidentified Queen of Torture“.

For the most part, the series is tissue free. However, the final episode will definitely have you chocked up.

United 93 is one of the most famous 9/11 feature films that came out in 2006 featuring FAA Flight Operations Manager Ben Sliney as himself and many unknown professional actors such as Broadway’s Cheyenne Jackson. The fact that most of the faces are unfamiliar to the moviegoer made it all that more powerful a movie unlike the Nicholas Cage helmed World Trade Center.

Roger Ebert said that the movie “does honor to the memory of the victims“.

Four stars. You will need those tissues. When the trailer was shown in movie theatres it caused public outcry due to the sensitivity of the material.

The television made movie, Flight 93, did not have the big-budget that United 93 had however it is worth a watch due to the telephone calls between the stewardesses and passengers of 93 and their family and loved ones.

Flight 93 had the fortune of being the last flight to crash meaning they had a chance to learn what happened to the other flights and make phone calls to their loved ones.

Four Star. This television-made movie will have you reaching for those tissues. Not only is the film based on the tragic flights of 9/11, but the phone calls between passengers of United 93 and their loved ones will have you weeping.

Interposed with the dramatizations are interviews with family members of the victims.

Due to the 9/11 storyline, “The Last Hour of Flight 11” will warrant a tissue but the docu-drama nature and runtime of 53 minutes keep the episode from getting too emotional.

A New Yorker (Edward Norton) is convicted of dealing drugs and takes time to re-evaluate his life before facing his prison sentence in this movie based on the David Benioff novel that was written before 9/11.

While not a story about 9/11, 25th Hour is a love note to the city of New York in the aftermath of 9/11. From the camera panning over Ground Zero to the mention of minority groups, the movie is a haunting view of post-9/11 New York.

Tears are not guaranteed. While Edward Norton is the box office draw, New York City is the star of the movie and the tragedy of a post 9/11 NYC is heartbreaking.

James Woods (Indictment: The McMartin Trial) does a great job starring as Rudy Giuliani in this pre-Trump movie about his work as a D.A. and Mayor in New York City. He drew worldwide attention and respect for the way he helped the city of New York heal post-9/11.

Giuliani became known as “America’s Mayor” when Oprah Winfrey used the term on September 23, 2001, at a 9/11 memorial at Yankee’s Stadium.

You’ll cry when you see the real-life footage of the 9/11 terrorist attacks on America.

The Space Between is a feature film about Montine McLeod (Melissa Leo), an alcoholic flight attendant, who gets stuck with nine-year-old Pakistani-American Omar Hassan (Anthony Keyvan) after their flight from New York City to Los Angeles gets grounded on the morning of 11 September 2001.

Losing people that you love, it hurts. There’s going to be days when you think you can’t possibly stand how much it hurts. Honestly, you feel like your heart’s going to explode from the pain. But then you wake up the next morning and you open the blinds and you just keep going. For a while, you’re just living in that space.

Four Star. This movie is a raw look at hurt, loss, anger, denial, and tragedy. The tissues will be needed. 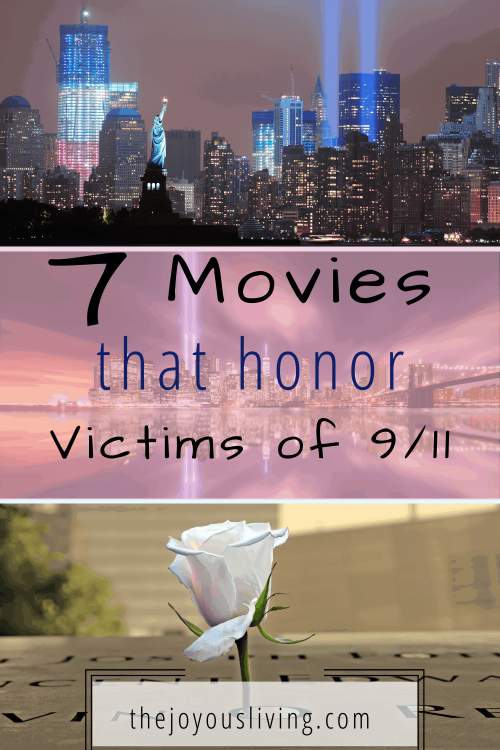