You guys are going to be blown out of the water by The Ronald Reagan Presidential Library‘s upcoming exhibit, Egypt’s Lost Cities, that has already been seen by over 1.5 million people in Egypt, France, Britain (British Museum) and Minneapolis. And after the six month stay at The Ronald Reagan Library in Simi Valley, California, it will make one last stop in Virginia before returning permanently to Alexandria where there are plans to construct a museum for antiquities of underground and sunken cities.

I had the honor of attending today’s press preview of the exhibit with a rare opportunity to be guided through the exhibit by Franck Goddio, underwater archeologist who found the two lost cities and all the artifacts within this exhibition, and Dr. Mostafa Wazery, Secretary General of the Supreme Council for Antiquities from Egypt. [FYI: at the press preview the exhibit was not 100% ready for the public so please allow for that in the photos I took of the exhibit.]

Kid you not that I was blown away by all the incredible stories I have heard and the stunning one of a kind artifacts that will be on display come Saturday, 5 October 2019, for the next six months.

So how can I possibly whittle it down to just 5 reasons to see the exhibit? With a lot of difficulty!

#1. If you loved the 2018-19 POMPEII exhibit at the Ronald Reagan Library you will LOVE this too!

As Franck Goddio explained with a twinkle in his eye,

“This is Water Pompeii! A big earthquake triggered a tidal wave and everything collapsed, 18 feet in a fraction of a second!”

Long ago, two bustling cities in ancient Egypt were known throughout the world as cultural centers of power, of wealth, of trade, and novel artistry. One day as the Mediterranean sun beat down on the bay of Aboukir, the cities slipped into the sea without a whisper of wind, buried for centuries. Determined to recover the cities that vanished, Franck Goddio, an economist by trade and underwater archeologist at heart, with funding by Hilti, delivered the discovery of a millennium, for he located not a shipwreck but an entire civilization!

This 18-ton monolith will be on display for the first time in the United States! You can see the Stele on display come 5 October 2019 outside the main entrance to the Ronald Reagan Library. 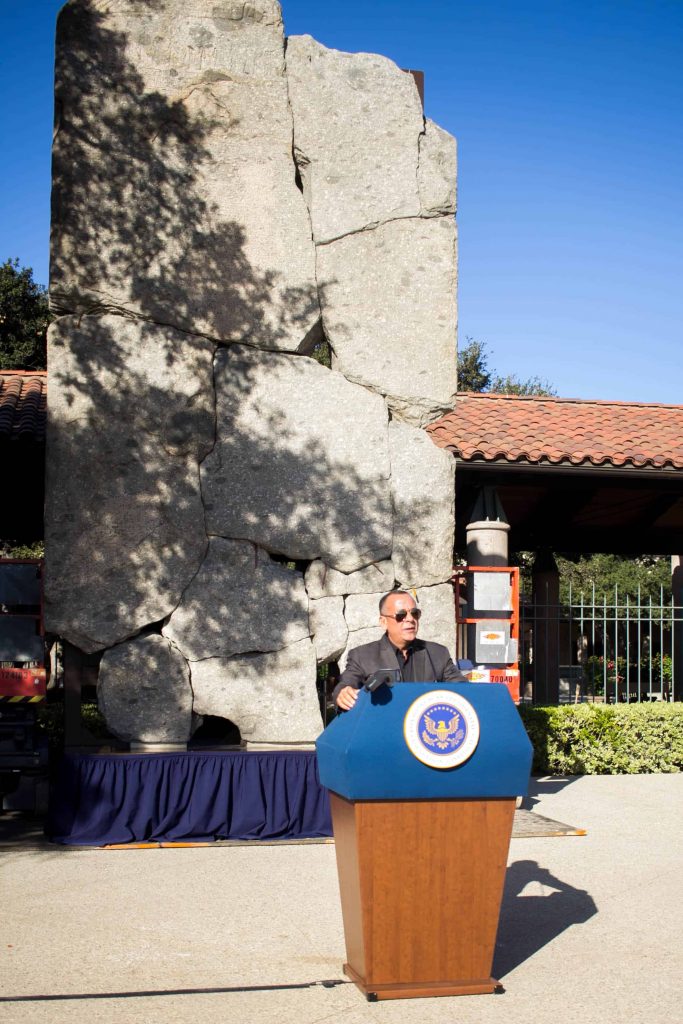 Just look at huge the Stele is with Dr. Mostafa Wazery in front of it!

#3. Come see the LARGEST statue of an Egyptian god! 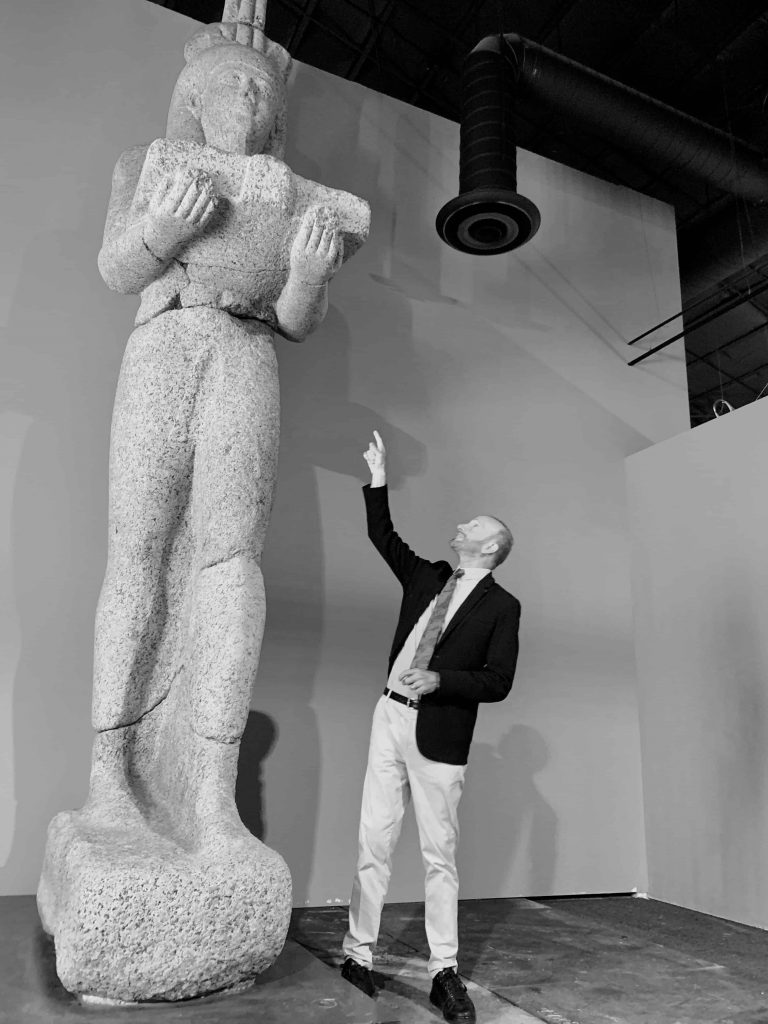 Prior to the Goddio archeological mission, the tallest statue was 2 meters. The Goddio team uncovered a statue of Hapi that is 6 meters tall! The statue was found in 6 pieces but nothing miraculously was missing!

Considering that 95% of Egyptian artifacts are from tombs and land excavations, this is a very rare and unique exhibition indeed.

FYI: There are a few gorgeous pieces on loan from Alexandria that had been previously excavated by other missions. However, the majority of the artifacts you’ll see at The Ronald Reagan Library are from Goddio’s underwater mission.

One interesting piece is a statue of the Holy bull Apis (an image of the god Ptah) that is on display for the first time outside of Egypt. It was such an important discovery in 1898 that every citizen from the wealthiest to the poorest donated at least one coin towards the restoration.

#5. The docents at The Ronald Reagan Library will have 2 days of training by Franck Goddio.

I don’t know how anyone can have any more enthusiasm when walking you through the exhibit then the man himself but the fabulous docents will be personally trained by Mr. Goddio so that’s a pretty close second.

There will also be audio guides available to rent from reception for $7 that include not only the permanent Ronald Reagan exhibits but also 16 stops in Egypt’s Lost Cities in English, Spanish and also in French in honor of Mr. Goddio. 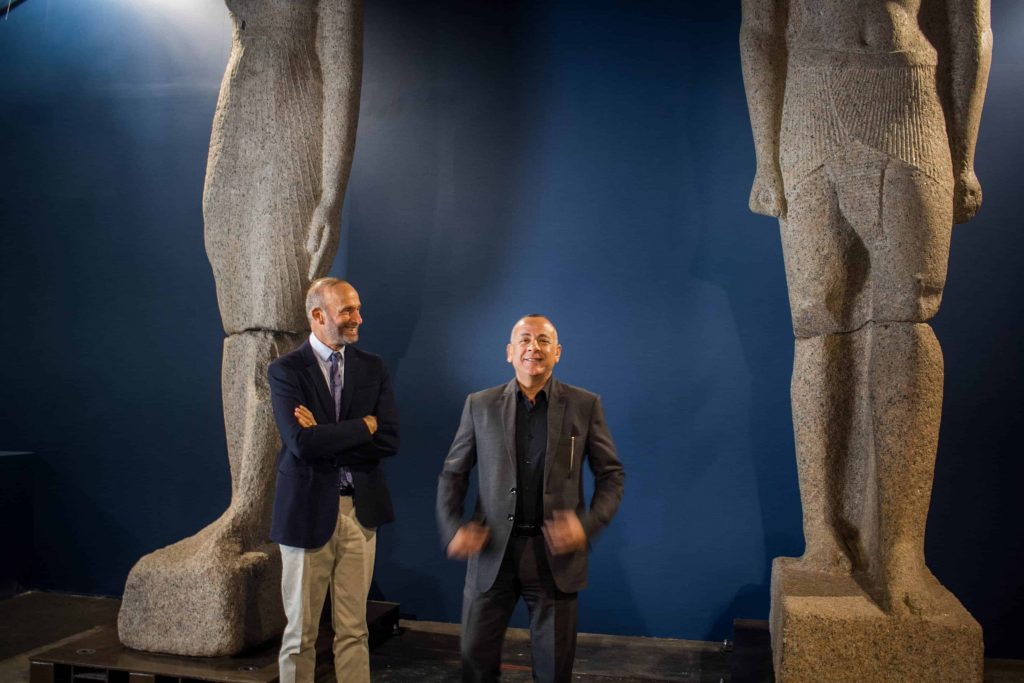 This exhibition was organized with the Institut Européen d’Archéologie Sous-Marine with the generous support of the Hilti Foundation and in collaboration with the Ministry of Antiquities of the Arab Republic of Egypt. It is underwritten in part through the generosity of the Salem Media Group, in conjunction with AM870 The Answer Los Angeles and 99.5 KKLA FM Los Angeles.

The Reagan Library is located at 40 Presidential Drive in Simi Valley, California.  Public hours are from 10 a.m. to 5 p.m. daily.  The Museum is only closed on Thanksgiving Day, Christmas Day and New Years Day.

The exhibit and museum are accessible with an elevator. The only part of the library inaccessible to wheelchairs are Air Force One and Marine One Helicopter. Wheelchairs can be checked out free of charge at the front desk (ID is required).